"A no deal or bad deal Brexit will seal the fate of thousands of workers in the North East." 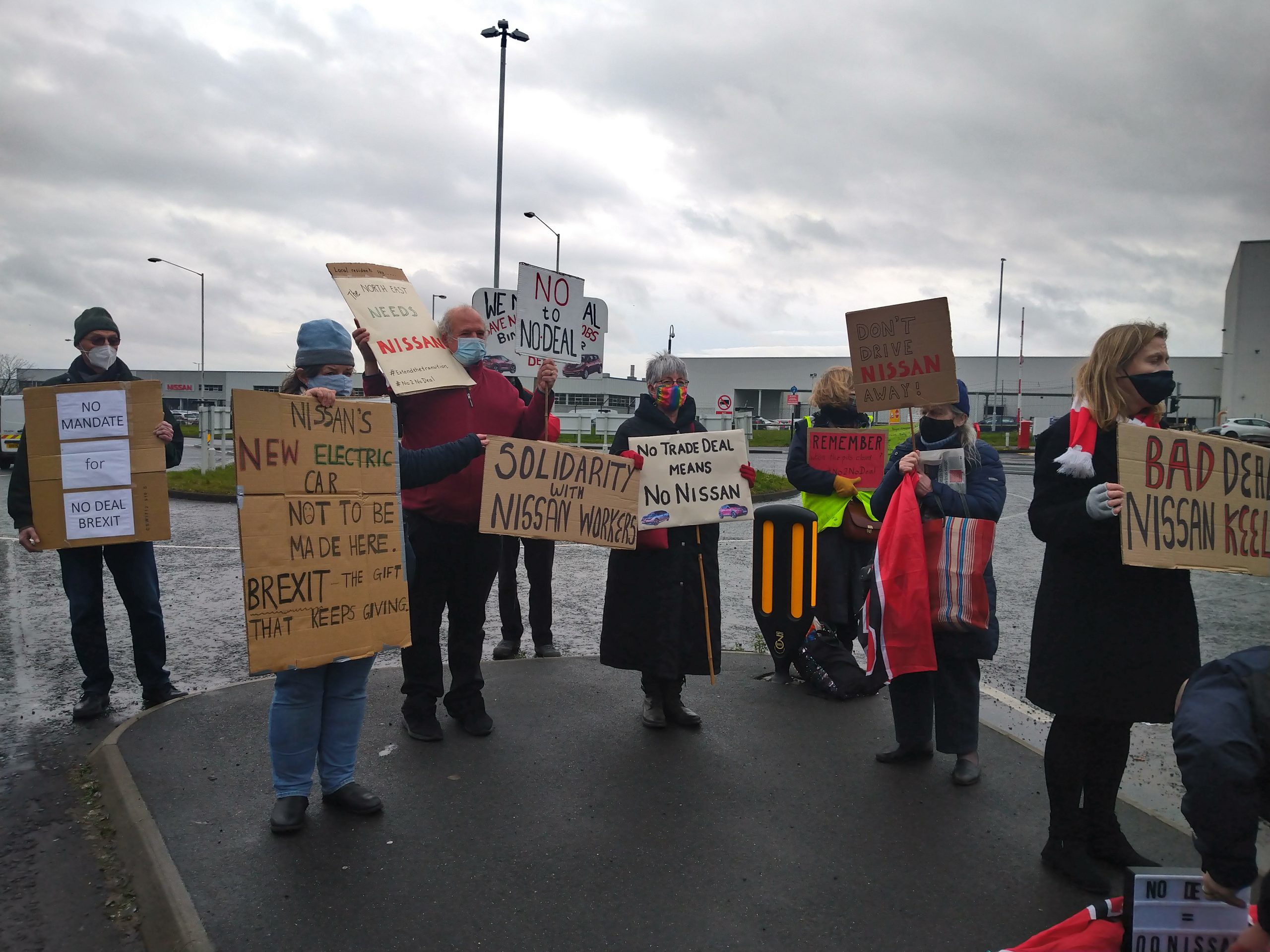 Local residents outside of the Nissan plant today

As negotiations on a Brexit trade deal enter their final fortnight, protesters today ramped up their campaign to save the Nissan car plant in Sunderland, which is facing closure in the case of a No Deal or bad deal Brexit. 33,000 British workers’ jobs rely on the plant, as both direct employees and those employed in the automotive supply chain. The socially distanced protest today took place outside Nissan Sunderland, highlighting the catastrophic impact a closure would have not just on local employees, but right across the North East.

Protestors carried placards with messages such as ‘The North East needs Nissan’, ‘No Deal = No Nissan’ and ‘Auf wiedersehen, Plant’, a poignant reference to the iconic 1980s TV series, ‘Auf wiedersehen, pet’ which traced the fortunes of a group of mainly North East construction workers who went off to work in Germany. As workers arrived at the Nissan plant there were numerous waves and honks of support.

“With the Brexit deadline fast approaching, as we face the worst financial crisis for 300 years, the Government has less than two weeks to save Nissan Sunderland and 33,000 UK jobs.

“A no deal or bad deal Brexit will seal the fate of thousands of workers in the North East. If this Government is truly committed to the Northern Powerhouse, it must do right by the British workers who rely on Nissan Sunderland for their livelihoods and agree a trade deal that secures its future.”

“Nissan stated last week that 10% trade tariffs imposed on the models they produce would make the plant unviable. The EU is the Sunderland factory’s biggest customer and for Nissan’s commitment to be maintained in the North East, any Brexit deal needs to keep their tariff-free EU access. Nissan also cautioned that any delay in overseas supplies of parts because of new customs checks could slow production.   They also stated that there was no plan B in a no deal scenario.  Nissan employs around 6,000 people directly from all over the region and thousands more in the supply chain.

Yesterday it was reported that Nissan is now going to produce, and ship to Europe its new electric car, the Ariya, due to concerns about Brexit

“The North East stands to be badly affected economically even if a trade deal is agreed and will be the worst affected by a No Deal Brexit.”

Which is more important – fish or the next generation? How the Erasmus programme has supported our young people

Which is more important - fish or the next generation? How the Erasmus programme has supported our young people