British Theatre Guide was founded 20 years ago by Peter Lathan from Sunderland. And on its 20th birthday it is still based in the North. 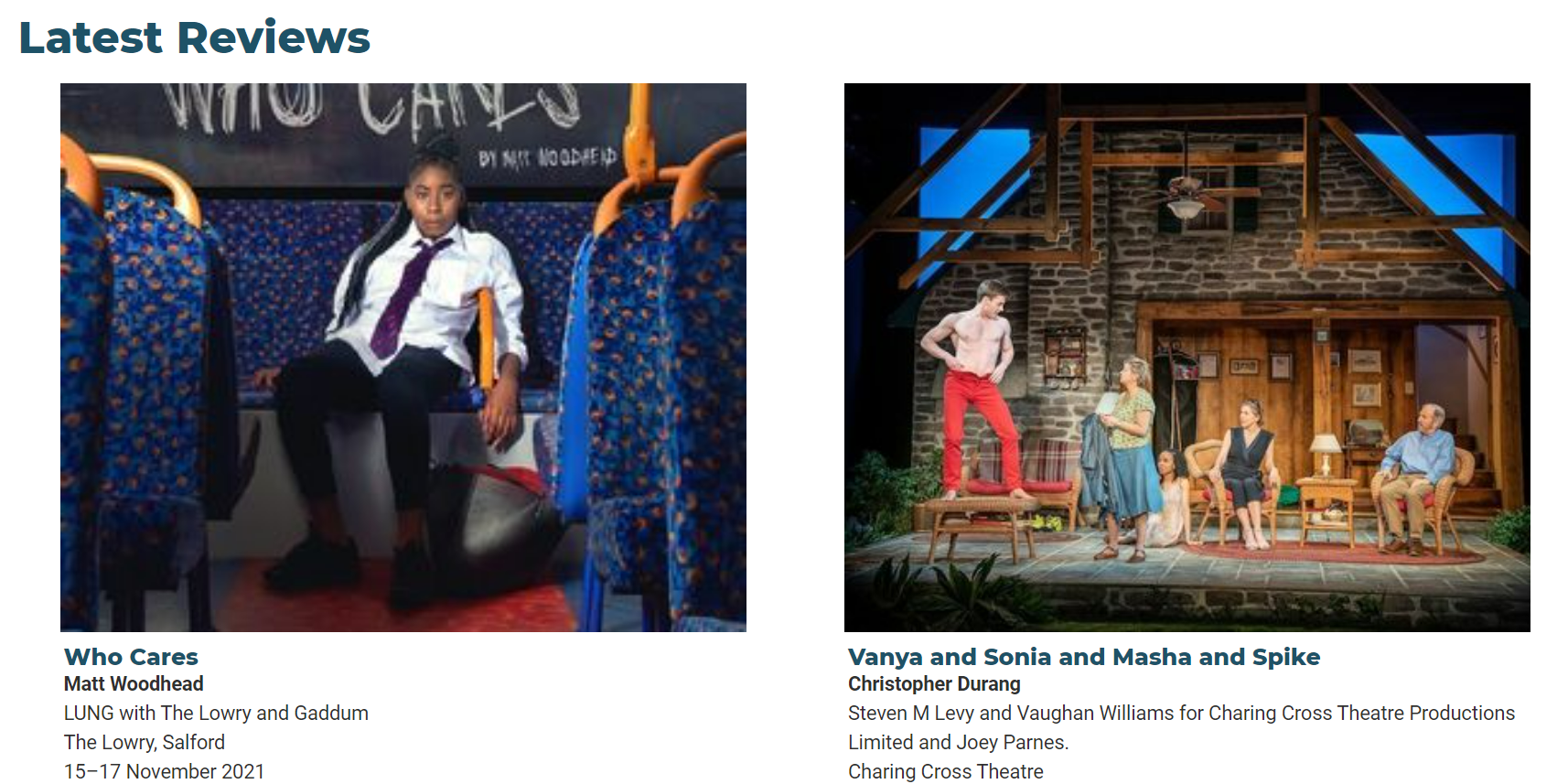 British Theatre Guide, one of the first sites dedicated to theatre in Britain on the new World Wide Web at the turn of the millennium, celebrates its 20th birthday on 17 November 2021, although its online roots go back even further.

BTG has a team of reviewers reporting on theatre all over, and occasionally beyond, the UK, but has always been based in the North of England, first under founding Editor Peter Lathan from Sunderland and then, since 2012, under Manchester-based current Editor David Chadderton.

Peter, who founded the School Show Page on CompuServe in 1995, was contacted by New York-based General Internet in 1996 to set up a site on British theatre as part of a network of sites on different subjects called The Mining Company, later to become About.com. The site went live in February 1997, and its first review, of Bob Carlton’s From a Jack to a King in Newcastle, went online in June.

About.com was taken over by Primedia, who axed 300 of the sites in 2001, including Peter’s, but editors were allowed to keep the content they had created. With the encouragement of fans of the site, including more than 4,000 newsletter subscribers, Peter used this to set up a new independent web site, British Theatre Guide, which launched on 17 November 2001, with the first edition of the weekly e-mail newsletter going out the same day.

After celebrating BTG’s tenth birthday in a space generously provided by the National Theatre in November 2011, Peter decided to step down as Editor, handing over the reins to David Chadderton, then North West Editor, but Peter continues as North East Editor to this day.

The weekly email newsletter has continued and it reached its 1,000th edition in April 2021. The BTG podcast—launched in November 2012 and featuring interviews with actors, writers, directors, producers, critics and others from all areas of British theatre—reached its 200th episode in 2020 just before lockdown and will soon reach episode 230. David programmed a new back-end on the server when he took over, and he rebuilt it from the ground up in 2018 for a complete redesign.

The current site contains around 20,000 reviews, including the one by Peter that launched BTG’s forerunner in 1997, and more than 13,000 news articles. A ‘what’s on’ section has recently been added to the site.

During lockdown, BTG reviewers continued to review online productions from around the world as well as DVD and CD recordings, plus Peter wrote a series of features about his highlights from a career in theatre going back to the 1960s. London Editor Philip Fisher, a founder member of the BTG reviewing team, has been writing a weekly column since lockdown began, touching on many important questions about a theatre industry attempting to survive a pandemic.

“When the British Theatre Guide went online for the first time on 17 November 2001, British theatre outside of London was hardly represented on the Internet. There were a couple of London-based sites which had a little coverage of what was patronisingly called ‘the provinces’ and some regional theatres had a web presence, but, on the whole, anyone Googling ‘British Theatre’ would get the impression theatre in Britain meant London and, of course, the RSC.

“The other thing different about the BTG was that it was based in the North East. Indeed, even North Easterners would say things like, ‘He lives in Sunderland. How can it be British theatre?’ I’m pleased to say, though, that, even though it’s almost a decade since I sat in the editorial chair, it’s still based in the North.”

“People ask if I thought, when it all started, that the BTG would still be going 20 years later. I was 58 so I couldn’t even be sure that I would be; I certainly had no expectation of it running for so long! But it is, and that’s great and I’m pleased that I still have a part to play as North East Editor.”

“I first came to BTG as a fan: I followed Peter’s About.com site and discovered BTG soon after it began. When Peter asked in the newsletter for reviewers in the North West, I dropped him a line, and I was signed up—my first review was of The Weir at the Octagon Theatre in Bolton in 2003.

“When I took over in 2012, British Theatre Guide was already a highly respected publication in the theatre industry as well as amongst theatregoers. I am very proud of the developments I have made with the site since then, but they were all built on solid foundations laid by Peter.”

“I do think that it is significant that we are based in the North, or at least outside London. While many of the larger media outlets are cutting their arts coverage, especially outside London, ours has grown significantly, and continues to do so, with as much attention paid to ‘the provinces’ as the West End and to the fringe as the larger theatres. This confuses some press and marketing people who just assume I’m in London—a number of times I’ve received an invitation to an event up North that begins with the instruction to meet at Euston Station…”