And what did the people of the Headland do when it became clear that their supposedly independent councillors weren’t actually independent after all? Nothing. 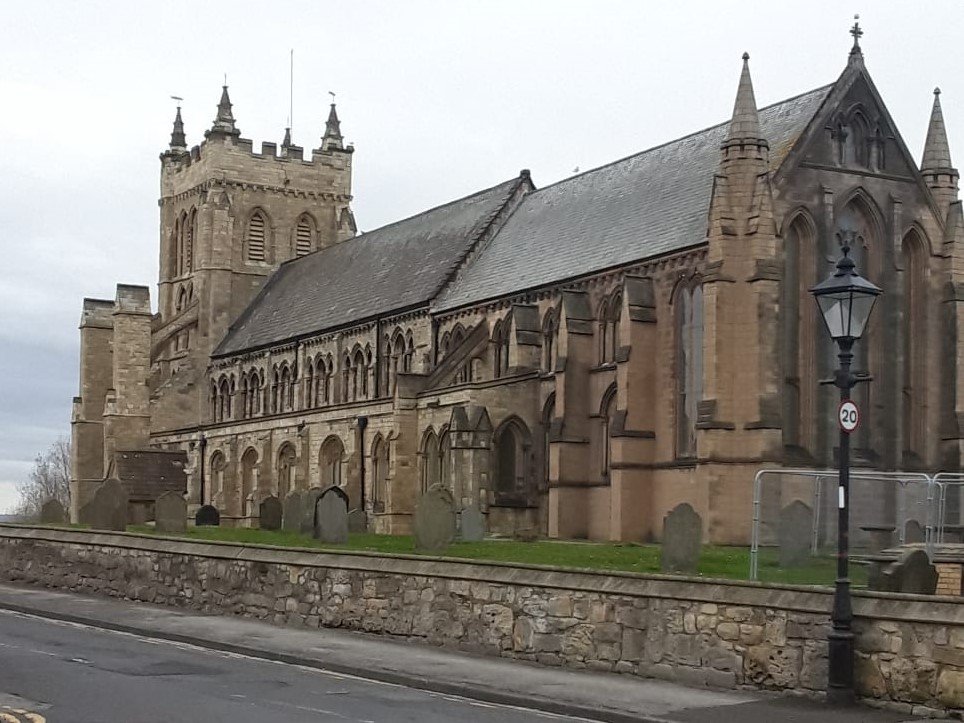 History sets Hartlepool apart from the other towns of the Tees Valley, which are largely a product of the 19th century. Hartlepool, on the other hand, was already on the map when Bede was alive, a monastery and abbey having been founded there in 674. In fact, based as he was just up the road in Jarrow, they might be considered ecclesiastical next-door-neighbours. The town might seem out on a limb these days, but that wasn’t always the case. On the site of the original abbey there now stands the magnificent 13th century St Hilda’s church.

Walking through the streets of terraced houses on what is now known at the Headland, between the church and the seashore, the first-time visitor may be struck by the fact that the whole area is, well, quite nice.  A bit jaded in places, but not run down by any means. Far from it.  And the Headland  has two primary schools, both of which perform relatively well compared to schools elsewhere in the town. But why would anyone expect it to be different?  Why wouldn’t it be nice?

Well, one of the reasons that the Tees Valley is at the sharp end of this government’s levelling-up agenda is that it has suffered more than most regions from economic stagnation and underinvestment spanning decades. And within the Tees Valley, Hartlepool has arguably suffered more than most. Even now, while the Treasury is coming to Darlington and investment is coming to Teesside through the agency of the South Tees Development Corporation, the bonanza hasn’t reached Hartlepool. Quite the opposite, if anything. The current difficulties of Liberty Steel and their financial backers, Greensill, may shortly result in the loss of 250 jobs in the town.

But it shares its industrial past with the rest of the North East, and with that came overwhelming support for Labour. During the decades of economic stagnation, however, the town started to become better known for its apathy than for its steadfastness.  At one point Peter Mandelson won an election here on a turnout of 38%. The predominance of Labour, in fact, became a bit of a joke locally.

Now, if there’s economic stagnation, you would expect the town to look a bit run down (some of it does), and you would expect there to be enlarged support for Brexit, in which, at 69%, Hartlepool excelled itself. Which resulted in Richard Tice of the Brexit/Reform Party standing for election there in 2019. Which brings us back to the Headland.

If the town itself is geographically isolated, the Headland is further isolated within the town, standing on a peninsula with one road in and out. In local elections in 2019 Labour lost overall control of the council, which is now dominated by local interest groups and independents. In the autumn of 2019 a group of these independents crossed over to the Brexit Party, formed a coalition with three Conservatives, and took control of the council. And of those councillors, three represented the Headland, and two the neighbouring ward of Hart.

And what did the people of the Headland do when it became clear that their supposedly independent councillors weren’t actually independent after all? Nothing. No fuss. Hartlepool people don’t make a fuss.  Some were undoubtedly upset by what had happened, but they expressed their discontent very, very quietly. And the anti-Brexit minority would defend the town by pointing to the Headland and saying “it’s them on the Headland.  They’re very Brexity”.

Now if they’re very pro-Brexit by Hartlepool standards, and deprivation correlates positively with support for Brexit, you would expect the Headland to be the sort of place that has burned out cars on bits of waste ground, which it doesn’t. What it does have is that other great correlate of Brexit  support, which is bungalows. Drive on to the Headland and the first thing you see is an acre of bungalows, not the well-heeled detached ones in their own grounds, but terraced ones, chalets you might say. So what it has is lots and lots of elderly people, as you would expect in a region that has suffered years of depopulation.  And the resident population is also overwhelmingly white. The ethnic minority population of Hartlepool is tiny, as is inward migration from the EU. This town is possibly as Anglo-Saxon today as it was when St Hilda stalked the cloisters.

It should be noted, in passing, that the town’s flirtation with right wing extremism can’t be pinned on the Headland. The single councillor from the For Britain movement represents a ward elsewhere.  And, in any case, the new recruits to the Brexit Party then left again in February 2020 and went back to being independent. So that was it sorted.

The reluctance of the people of Hartlepool to make a fuss is perhaps down to what we might call ‘the unfortunate incident’. The unfortunate incident during the Napeolonic wars, involving the hanging of a monkey because they thought it was a Frenchman, is an unedifying tale of gossip, a relaxed attitude to animal cruelty, and well-developed xenophobia. It’s a story that the national press has already picked up on in a casual sort of a way. And some doubt has been expressed as to whether it’s historical fact or urban myth.  This rather misses the point.

It was Bede who was the master of the urban myth, and he, very prudently, never questioned the veracity of the miraculous events he reported (although he was always sure to mention if there were any living eye witnesses), because he had no evidence as to whether they were fact or not. What mattered was whether people believed them, and how they behaved in relation.  Which is why it is significant in Hartlepool.

Many towns have been the location of gruesome and unpleasant incidents in their history.  Generally they keep them there. Not so Hartlepool. It seems that in the early 2000s people in the town wished to make a statement about not taking politics seriously.  A candidate in the mayoral elections of 2002 was one H’Angus the Monkey, who was duly elected. Hartlepool didn’t want to forget its past, even the bad bits. But the 2016 Referendum brought renewed seriousness to politics.

The people of Hartlepool may be keener to forget the town’s past in the coming weeks as it becomes the focus of national attention, and the story reaches a new audience that doesn’t see the funny side of it. This election is anything but a foregone conclusion; there are a lot of issues at stake, and a lot of egos to be dented. The people of Hartlepool may find the spotlight an uncomfortable place to be in.