James Sheerin responds to comments about a 'high wage economy' by Boris Johnson. What is needed is a proper long-term strategic plan 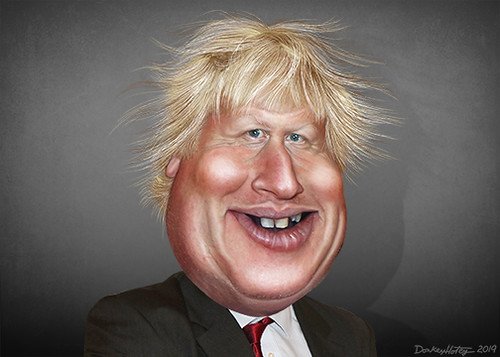 "Boris Johnson - Caricature" by DonkeyHotey is licensed under CC BY 2.0

It’s not that a high wage, high productivity economy is a bad idea. It’s what we desperately need to improve the lot of everyone in our broken society. It’s the bare-faced insincerity of Boris Johnson, the man who dreamed up the argument, perhaps even as he spoke to Andrew Marr last Sunday, as a way to divert scrutiny from the looming disaster facing the country thanks to his incompetence.

Johnson’s only response is always to react to public opinion and say what he thinks people want to hear. However, we can’t even begin to go down this route without doing the groundwork. A change of the type and scale he talks about can only be achieved with massive investment by business and government, with revolutionary changes in education, both of our children and those of working age and (probably) much higher and much fairer personal and business taxation.

It is impossible to achieve this in a country which produces virtually nothing, relies on people spending money in pubs, shops and restaurants, where local economies in cities like my home town of Newcastle are kept going by relying on students, funded by personal debt spending money like there is no tomorrow.

We can only do it with the help of successive governments with a long term strategic plan which aim to achieve all this by rebuilding businesses which generate wealth, both in service industries and manufacturing.

None of this can be achieved by a nation isolated from its nearest markets or which impedes or prohibits freedom of movement in and out of the country.

After all, who will help provide the investment we need without a readily accessible market and an available skilled workforce?

We have wasted the years since Maastricht by making a fast buck from a cheap (and better educated) European workforce, whilst ignoring our own. We should never have allowed our own population to have been abused in this way. This has only deepened the feeling of resentment of Europe in places like my own North East.

Freedom of movement has worked well most of the time in most of Europe, but failed here because it was used as a way of living off the back of other countries without investing in education or our ‘forgotten’ regions ourselves. For too many of our people it was a one way street, with a large ‘No Entry’ sign to those who weren’t given the skills or inspiration enough to make use of it; great for many of us, but scary uncharted territory for the majority.

We don’t need a liar with no plan, supported by a government of non-entities running our country. We don’t need a Parliament stuffed with incompetents (and I’m not just referring to the Conservative party). We need a political class who will lead us back into the European fold, but in a way which sees it as a way to improve the lot of all of us living in this miserable, lonely little island.