We are doing democracy, we are doing being British. We’re doing it in much the same mode the hero generation did in ’41: we’re doing persistence. 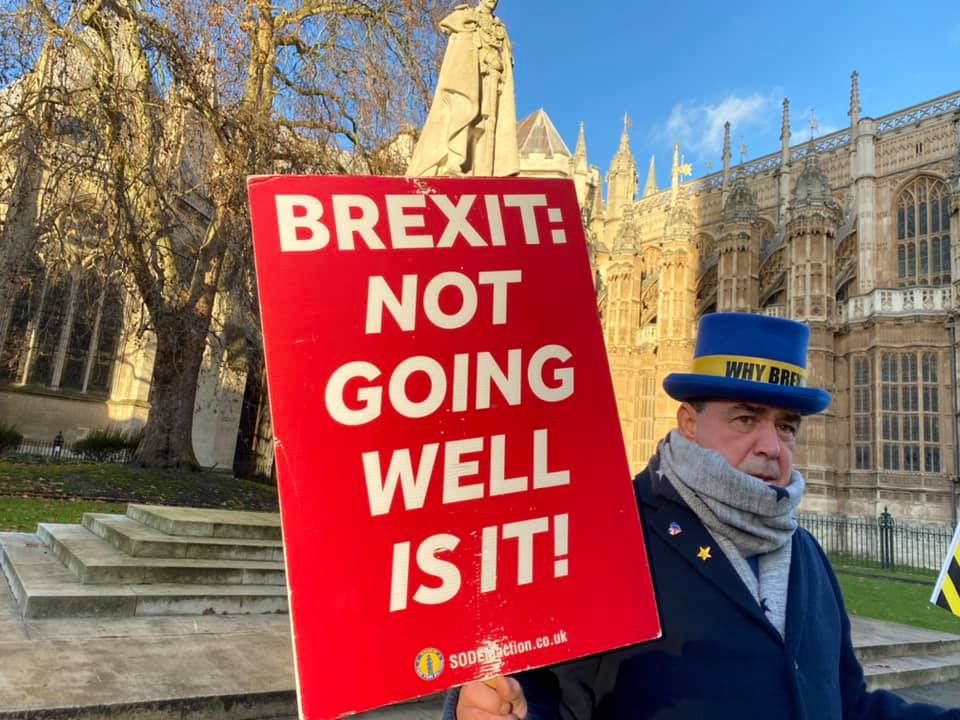 The compliments of one’s opponents are often unintentional, but they are sweeter than praise from one’s own true love. As I write this we’ve nudged into March. Brexit persists in being a catalogue of disasters, such as the flight of assets, or the crumbling of the Good Friday Agreement, things we have been assured for half a decade are definitely not going to happen. But they’re happening. Well, let’s be honest – such reports might not greet us every single day exactly, but we’re certainly seeing a few a week. This is the new normal. The UK is crumbling as the corrosion of its hubris is finally no longer restrained by artificial transition periods.

In the last week there has been a curious intensification of attention upon a group that, were we now approaching the promised sunlit uplands of a glorious Brexit, would be but a footnote, occasioning a sorrowful shaking of the head and perhaps even pity, as it is thereby proved to have been foolish and misguided. However, since the mountain of evidence that Brexit is the single biggest dumbass mistake made on the scale of nations in decades, possibly centuries, that group looks rather more like persistent Cassandras, proven tragically right as they warned and warned and warned – but were ignored. Now vindicated, but too late.

Steve and the group (an informal assemblage of which you might consider me to be a member) are often referred to in the press. This is sometimes a feature about Steve himself or the group together and our persistent efforts to articulate the protest of more than 16 million people. However, it’s more usual that a photo of the protest will sit at the head of an article and serve as a copy editor’s shortcut to saying “this is about Brexit”. Steve Bray has found himself made into an icon by circumstances, the readily recognisable synecdoche for Brexit dissent. So, you’ll have seen his photo heading many an article, but sometime he isn’t mentioned in the text at all, and when he is it’s often only in passing – they’re just using his iconography to set the tone as they then talk about negotiators or fishermen or court cases. This is a tribute to the persistence of his stand – if you see the guy in the top hat with banners you know, at least broadly, what the article is about, and it should be noted that this iconic status for his image reaches further than the UK borders, and that certain of the foreign press have also used Steve and the SODEM protest in this way when addressing Brexit.

In the last week or so, however, Steve and SODEM have featured in articles, not as a shorthand icon to set the scene, but as the very meat of the article. The Express (others too, such as The Foxhole, but let’s concentrate on the print press) has most notably been reporting Steve’s tweets as he organises new protests, not just in Westminster but the country over, to begin once restrictions such as pub and restaurant closures are lifted. It is fair, after all, to say that if it’s safe to go to a pub, it’s safe to stand out in the open air waving a placard.

Indeed, The Express has most sportingly disseminated in great detail the dates and locations of these protests. No doubt this is in the hope of inspiring a counter protest from the many out there guilty, be it a matter of malignancy or foolishness, of betraying their own kin and country to a Russian funded conspiracy to destabilise the UK, the EU and beyond. The Express, as a key disseminator of propaganda intended to make your granny complicit in throwing away her grandchildren’s futures, has a vested interest in Brexit being a glorious success. As the disastrous consequences to our fishing and entertainment industries, and now even our financial sector, mount, a distracting focus must be found to stop their faithful readership confronting their complicity in treason.

They’re desperate. They’ve been found out. They’re currently riding the unwillingness of their readers, and Brexiters generally, to accept that Brexit is now revealed to be a lie because so many of those very readers are complicit in facilitating that lie, and the consequences for the country are so grave. It’s a particularly potent brew of complicity because it was notions of patriotism and loyalty –in themselves perfectly fine sentiments – that were harnessed and weaponised to spur normal people into this betrayal of country and kin.  The great foe of the British in the 20th century were the fascists, whom we defeated, but now the children of the hero generation have fallen for the glamour of fascists, tugged their forelocks to them, and cravenly done their bidding. We have a government that doesn’t respect domestic law, our constitution, or international law. We have a government that can’t respond to an international crisis without seeing it as a means to profit, and not even competently addressing the crisis for profit. People are dead, thousands of people are dead, tens of thousands above and beyond the number we might sadly have never been able to save from plague, because this government prioritised their mate’s and party donor’s profits over saving the lives of plebs such as you and I (as they see us).

So, if you can’t big up Brexit on its merits (it hasn’t any – the roll out of the vaccine is not contingent upon Brexit, though you can understand why they’d like to pretend it is) you need to do down the opposition – which is, after all, the key strategy of their ultimate puppet master, Vlad Putin.

Russia sits on great wealth in the form of natural resources, but natural resources that are relatively inaccessible in remote areas under ice or water, and which are likely to become entirely valueless in perhaps just two or three decades as alternative energy sources improve. To have any hope of being able to exploit those resources competitively on the world market, Russia’s competition must be so destabilised as to raise costs, and therefore prices, and thus we have the destabilisation of the EU and US, via such game wheezes as Trump and Brexit.

In simple terms – if you can’t make yourself look good, try to make the other guy look bad.

And so we have The Express and its newly energised obsession with Steve and SODEM.

The Express’s great complaint against Steve and SODEM – is that we won’t stop.

Thus the headline for the article in the Express of Tuesday 23 February 2021:

“Give it a break! Rejoiners plan huge anti-Brexit protest on first day of Covid freedom

OBSESSED Rejoiners have called for an “all-out protest” as soon as lockdown conditions are lifted, with huge “UK-wide” anti-Brexit demonstrations planned.”

It then reports on Steve’s tweets calling for protests up and down the country.

Headline for article of Monday1 Marcht:

DESPERATE Rejoiners have organised a five-day megaprotest to try to force the UK back into the European Union.”

This article is little more than a rehash of the earlier one, but now rejoiners are “desperate”, or even “DESPERATE”, rather than merely “obsessed”. The histrionic tone is heightening. Basil Faulty has screamed at his red Morris and leapt from the car, and is now thrashing it with a tree branch.

Headline from article of Tuesday 2 March
“Ship has sailed! Rejoiners blasted for mass anti-Brexit rally: ‘Back your nation instead!’

REJOINERS preparing to stage mass protests across UK cities pressuring the Government to reverse Brexit have been ridiculed for their dragging out their “sour and bitter” fight, and told to instead channel their energy into backing Britain.”

“If you love the EU so much go live there”, but the fact is that we’re fighting for the UK, not the EU.

“The EU didn’t prevent war between European countries, NATO did”, which is simply wrong – NATO has no remit to mediate between members, it is designed to counter external threats, and what Churchill set up at the council of Europe in 1948, which would, in time, develop into the EU, was expressly intended to prevent war between members by means of locking them into interdependent relationships, initially in the matters of natural resources, coal and steel, the resources you needed if you were to execute a war in the 1940s.

And “get behind the UK”, as though that isn’t exactly what we’re doing, fighting for the UK against traitors to the legacy of Churchill, and fighting against fascism, in a continuation of one of the proudest of our British traditions.

We are doing democracy, we are doing being British. We’re doing it in much the same mode the hero generation did in ’41: we’re doing persistence.

And the press and the Brexiters are getting desperate.