David Walsh looks at how a 14th century book, the Gyseburn Bible can tell us about life at that time at Guisborough Priory 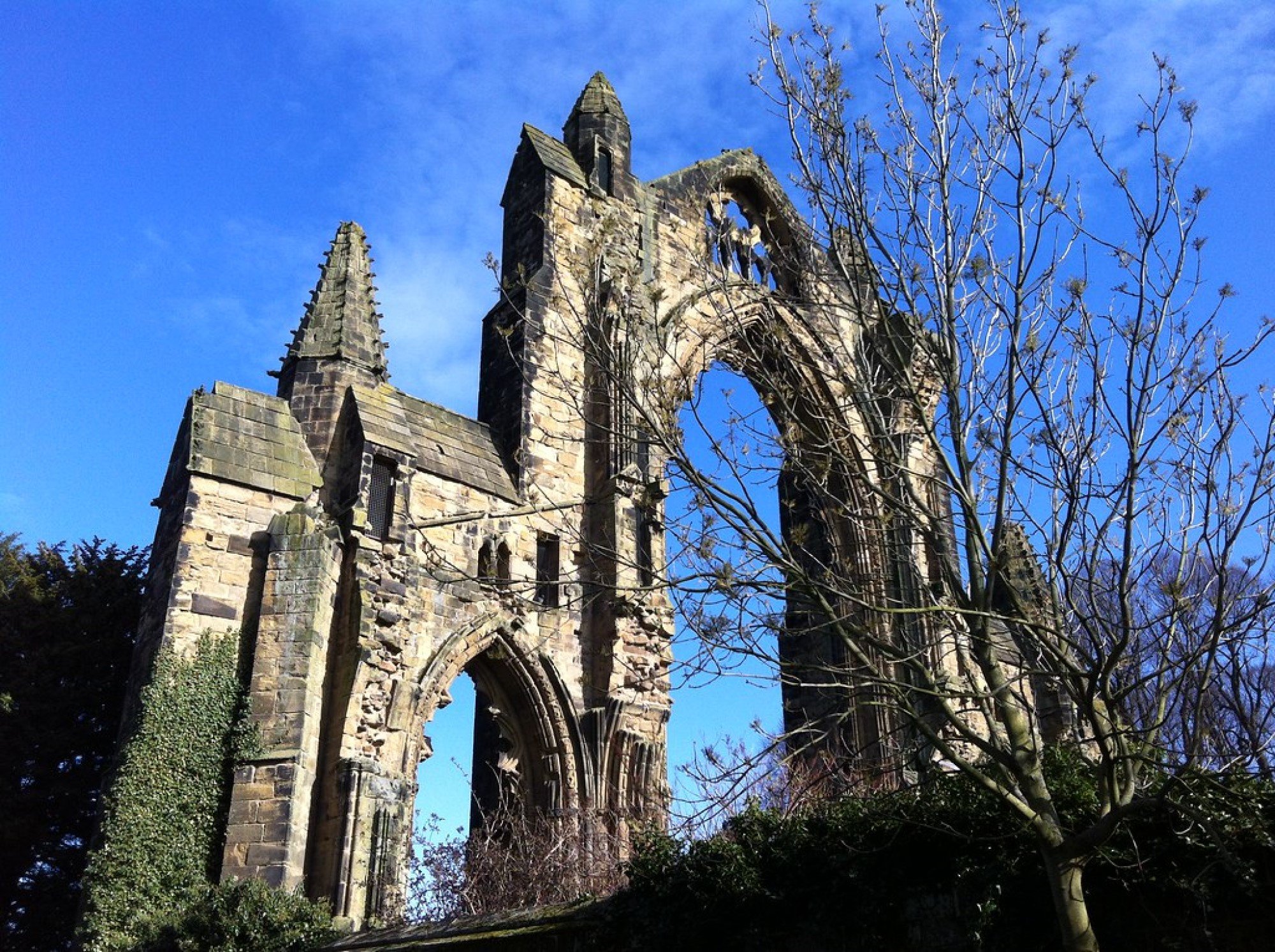 "Guisborough Priory" by Temple Moore Trail is licensed under CC BY 2.0

This topic came to a head when I wrote a column in a local paper a few years back about the display of the 14th century ‘Gyseburn Bible.’ Gyesburn is today’s Guisborough, and the Bible was a venerated working bible used by the monks and abbots of Guisborough Priory when that great Cistercian church dominated local communities and societies.

I’ve seen the bible in the town’s library during its visit and I hope it returns very soon. It is, after all, a surviving artefact that was at the centre of the Priory’s existence as an institution. Without Bibles conveying the words and precepts of an almighty one, the Priory was nothing more than a building, intimidating in its size, but without substance or rationale to its existence.

The Gyseburn Bible stands out as being a richly decorated handwritten copy of the Vulgate bible which was given to the Priory in 1333. It was already therefore a very old object when it came to the town (possibly from York and the great Minster). The flyleaf contains an inscription, partly erased, in a large hand which reads “Liber sancte marie de Gyseburn” a book of St Mary’s of Gyseburn (the Priory was dedicated to St Mary). The manuscript was copied from the original on vellum, but there is no indication as to where it was copied, although a centre for scribes was in York where they clustered around the Minster.

Such books are a long way from today’s standard.  Not using paper, but instead, vellum, an animal hide, treated, re-treated and treated again. There was no printing but instead written and illustrated laboriously by hand. The inks, prepared from crushed berries and from secretions from insects. Bibles like this would have had glitzy special effects, like jewels on the cover, special gold leaves and other dazzling elements (often imported from today’s Middle East).

The decoration of the Bible was quite striking, each book has a large illuminated initial letter and many of the chapters also have such a feature, often in red with green detail or blue with red details. There is also a pictured series of fantastical creatures (known as grotesques) which appear in the borders throughout the volume, as well as copious marginal notes, mostly readings to assist the scholar, which appear to be in the same hand as the original scribe.

Why is this Bible significant?

So why is this Bible so significant? Simple. In the England of that day, Christianity had been the adopted religion for centuries, but it was a religion relying more on the written and spoken text of the Bible than just the adoption of much of the rite and ceremony of pre-Christian religions practised in these isles.

So, the Bible and theological writings which accompanies the Bible were totally central to the narrative of practised Christianity from the humblest small village church to the great abbeys, minsters, and cathedrals of the post Norman eras. The Bible and the preacher reading said Bible were analogous to the newsreaders, as they are too reading from scripts instead being in front of cameras, to be transmitted in the form of today’s modern TV news.

Where is the Bible now?

The Bible appears to have remained with Guisborough Priory until the dissolution in 1540. Another name to appear in the manuscript is that of Christopher Malton, a priest, and this name appears in a list of the former Canons as receiving a pension of £5 6s 8d. It seems a reasonable assumption that it was this Christopher Malton who took the Bible with him in 1540.

By 1552 he was said to be “dwelling in Lyllye in Hartforthshire” (today’s Lilley near Hitchin) and appears in a list of former Canons who were complaining that their pension was in arrears by as much as eighteen months. It then, by a series of twists and turns, ended up at St. John’s College Cambridge, who are now the formal owners. This literary heritage exists alongside more prosaic physical remains from the Priory such as the coloured terrazzo tiling and statuary. For those who know where to go there is more than the brooding stonework dominating the late afternoon shop fronts of today’s Guisborough.

What role did Guisborough Priory undertake?

Despite that opulence there was no evidence that, as in some other parts of England, the Priory and its Priors and monks were disliked for greed and mendacity, and where dissolution was welcome. Guisborough Priory contained a vast amount of land, which contained well nurtured cattle and sheep, arable crops and even pigeon cotes and fishponds. Showing that the Priory was thus a source of food and clothing and the main source of employment, and so a popular institution.

That inbuilt economic security with an ability to bounce back after hard times was especially important after wars and Guisborough was on the front line in the protracted battles between the English and Scottish nobles and their hired armies.

This area of flat laying, rich if somewhat clayey land near to the Vale of York (the MI of the medieval world) was attractive to the new Norman landowners of the day who could see rich pickings in produce and rent as well as Priory elders who could expect healthy tithes.

So many of the forebears of the big landowning families we still know today settled here and threw up their mansions and castles. And these groups would each have their own language as would the unrecorded peasantry working for the priors or the new Norman ducal estates. Which is where I want to go in Part 2 of this article.

Fast fashion: do you know what you're wearing?