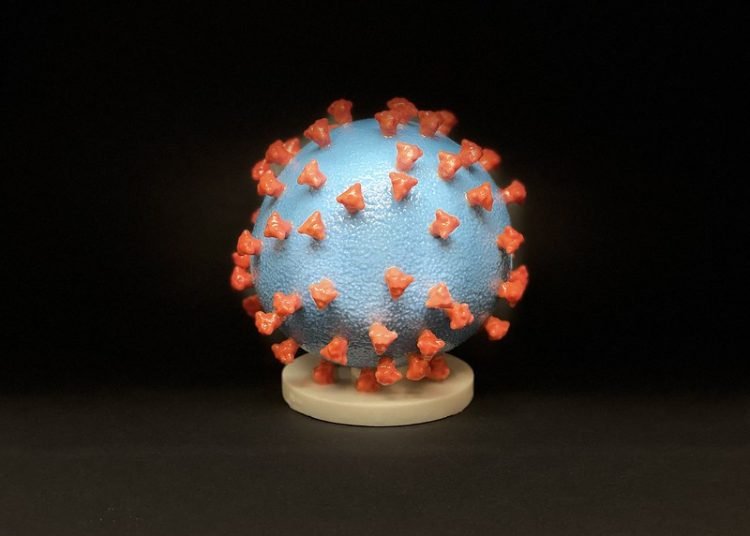 3D print of a SARS-CoV-2 the virus behind the current pandemic. Picture by NIH Public domain

The short answer to this question is that the severity of the second wave will depend on the effectiveness and timeliness of our government’s response.

International comparisons, using the Worldometer website, have shown striking differences so far. China has kept the epidemic under control since February. Next in the performance league are countries like South Korea and Japan: they have never completely suppressed the infection but have been able to keep the numbers at extremely low levels.

Here in Europe Germany has done a good containment job, whereas Belgium, Spain and the UK have suffered the largest number of coronavirus deaths in relation to the population size. Many European countries are now suffering from a significant increase in case numbers. Given the limited appetite for national lockdowns, this second wave is like to extend through autumn and winter, possibly with multiple peaks.

A frequently asked question is whether the infection has become less severe. If we look at the UK data using the GOV.UK coronavirus website, we can see that the number of deaths is much lower than when we had a similar number of new infections in March. There is no evidence, though, that the virus has become less deadly. The apparent decrease in mortality seems to be due primarily to the fact that we now identify more cases with mild or asymptomatic infection and in younger age groups.

The Public Health England weekly report shows an uneven geographical distribution with higher infection rates in areas with a higher Index of Multiple Deprivation and in ethnic minorities. The report includes a list of local authorities with high infection rates, which are listed as ‘areas of intervention’, ‘areas of enhanced support’ or ‘areas of concern.’

Areas of intervention are those most severely affected and currently under a local lockdown: we have no such areas in the North East.

However, the list of areas of enhanced support areas includes South Tyneside, Gateshead, Sunderland and Newcastle. Being listed as an area of enhanced support is an opportunity to introduce additional testing and local initiatives, as well as to appeal to public’s sense of responsibility. The Leader of Sunderland City Council said: “The current situation is extremely serious and if more people do not take more responsibility and act more sensibly then we will go back into a lockdown. This is our last chance.”

Local authorities have limited powers or resources: the initiatives they can take often include suspending non-essential care home and hospital visits and increasing the monitoring of pubs. However, local political leaders across the North East have asked government to enable a more proactive approach to stem the tide.

The lowest tier in the local authority watchlist areas are the ‘areas of concern’: Middlesbrough and Hartlepool are currently in this group.

At the beginning of the pandemic the R number (the average number of people infected by each case) was about 3. It then dropped below 1 when lockdown restrictions were introduced but started to rise again when the restrictions were lifted. The most recent REACT-1 report published on 7th September estimates that the R number is now 1.7 and that the number of new infections could double every 8 days. This is worrying. The R number could increase further with the reopening of universities and the transition to autumn weather.

Boris Johnson’s repeated calls on workers to go back to the office, even if they could work effectively from home, have been counterproductive in terms of infection transmission and could damage the economy, given the impact of the increasing number of local lockdowns.

The main threat, though, arises from the inadequacy of our testing capacity: many media sources have reported that symptomatic patients struggle to get access to tests. Without timely testing the identification of contacts and the implementation of appropriate local restrictions could be delayed to a point when we lose control and we are forced to introduce another national lockdown.