Does having right wing views make you right wing? Fox has happily boasted her ‘life-long leftie’ credentials whilst arguing for individual freedoms at the extreme end of the scale. 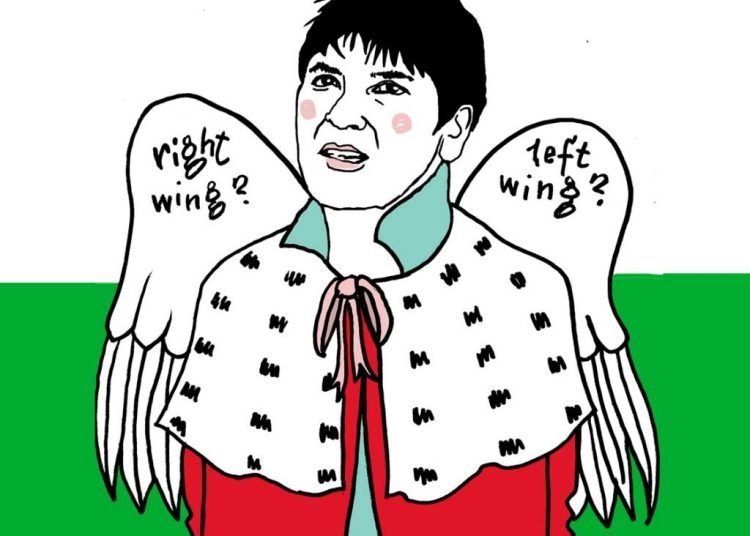 Which wing of the Lords will Baroness Fox choose? Illustration by Suzy Varty

As the House of Lords takes its seats for the new session of Parliament, we can expect the 36 new peers to have their ‘formal introduction’ to the chamber over the next few weeks, after which they can take part in debating and passing legislation.

The question is, how will the new Baroness vote? As the self-proclaimed ‘life-long leftìe’? Or as the media pundit who has peddled a pick ‘n’ mix of right-wing ideologies over the last two decades?

Is her political posturing for both left and right still tenable now she’s officially a politician?

We might also wonder how a revolutionary flag-waver become an apologist for right-wing libertarianism.

Radicalism often mellows over time. What is strange is that Fox’s entire Revolutionary Communist Party (RCP) took an identical U-turn, over the same period. The RCP transmuted from Trotskyist mini cult to a champion of right libertarianism and big business, in a move that began in the eighties. By 2000 the senior cadres were poised to become media pundits and ‘thought leaders’ for the right.

The RCP veterans and their many grouplets deny that they are a secretive far-right lobbying operation which critics have called the ‘LM Network’ after their magazine, Living Marxism.

Joining the RCP when she was at Warwick University, Fox became a social worker and teacher and eventually took on the role of RCP Branch organiser in Newcastle.

The RCP was the descendant of a series of Trotskyist schisms in the 1970s, its great-grandparent now called the Socialist Workers Party (SWP). It was born in 1976 with 20 members and grew to around 500 in its 1980s heyday.

Described by Observer columnist Nick Cohen as ‘the smallest and nastiest of the Trotskyist sects’, the RCP refused to engage with anyone else, conflicts reportedly leading to fisticuffs.

They even picketed nurses pressing for fair pay.

The RCP saw itself as the vanguard of the revolution. It had a reputation for recruiting well-heeled students off the street – the only member I knew was the brother of a Lord. It helped that they were the best dressed on the left – miles better than the Man-At-C&A SWP.  Newbies were subjected to haranguing re-education sessions, the educators driving home the ‘line’ – policy which must never be questioned.

Members were required to donate a tenth of their wages, but this income, many wondered, could not account for the cost of a central London office and production of their glossy Living Marxism magazine.

The RCP was noted for its front groups, among them the Irish Freedom Movement, bitterly opposed to any peace deal for Northern Ireland.

With the IRA’s Warrington bombing in 1993 which killed a toddler and a 12 year old, the RCP issued a statement saying that nationalists had a right ‘to take whatever measures necessary in their struggle for freedom’.

This was to come back to haunt Fox in the May 2019 European Parliament elections when she stood as a Brexit Party MEP candidate in a Euro-constituency that included Warrington. Yet despite the passage of time she still didn’t issue an apology to the victims’ families.

In 1996 the RCP folded and the gospel was spread via  Living Marxism (LM) magazine, with Fox as co-publisher. The now-established mantra was individual freedom: freedom from government and regulations, freedom of all speech. In other words, a libertarianism indistinguishable from that of the American right wing.

In 1996 LM Magazine was sued by ITN for falsely claiming that their coverage of Bosnian death camps was faked. When in 2000 they finally lost the case with £375,000 costs, they set up the Institute (now Academy) of Ideas, headed up by Fox, and Spiked online magazine, co-owned by Furedi and edited by Mick Hume.

The two organisations banged away at their agenda: anti-statism, anti-regulation in a risk-averse society, a Freedom for All free-for-all, with gloves-off attacks on anything considered the establishment (of the centre-left). They shared platforms with libertarian right organisations like the Institute for Economic Affairs and the Cato Institute.

The Academy of Ideas (AoI),  a self-described ‘think tank’ with the slogan ‘Ban nothing- question everything’, hosted debates at prestigious locations like the Tate Modern and the British Library.

For a bankrupt magazine, the initial costs must have been daunting. Their source of start-up funds remains a mystery.

From 2000 Fox gained more recognition in the mainstream media, appearing regularly on The Moral Maze, Any Questions, Question Time and The Daily Politics, an ideological pugilist who could guarantee a fight.

Other RCP veterans could be found making documentaries carrying the anti-environment message on Channel 4 and BBC.

Jonathan Matthews of gmwatch.org found an alarming number of RCP alumni had gone into the science mainstream in what appeared to be a strategy of entryism. Furedi’s wife, Ann, became Chief Executive of the British Pregnancy Advisory Service. Fox’s sister Fiona headed up the Science Media Centre.

The groups claim they have nothing to do with each other and the many examples of them working together are purely coincidental. So Brendan O’Neill of Spiked naturally holds a seminar on Brexit at Worldwrite; Worldwrite just happens to film AoI debates.

All the groups in the ‘network’ claim to be non-political. Their funders’ interests tell another story. Spiked receives money from the right wing Koch Foundation and the chemical and pesticides industry. Worldwrite receives a grant from the Ayn Rand Foundation, charity of the novelist darling of the far right.

For all their protestations the groups sing from the same hymn sheet on key issues. Worldwrite and Spiked are both enthusiastic supporters of Brexit.

Does having right wing views make you right wing? Fox has happily boasted her ‘life-long leftie’ credentials whilst arguing for individual freedoms at the extreme end of the scale.

Fox’s alliance with the Brexit Party since last year has posed a new challenge: how to perform the semantic acrobatics of being left-wing, right libertarian, and joining a party with anti-immigration at the heart of its hyper-nationalist position?

In a Daily Mail article she likened the Brexit Party’s 2019 Euro-election campaign to the struggles of the Levellers, the Chartists,  the Suffragettes and the Peterloo martyrs. (Cue the sound of spinning in graves).  No mention of her total opposition to any immigration controls as aired on The Moral Maze. She also mentioned that she was a Leftie of 35 years’ standing.

Fox has enthused about the growing disillusionment throughout Europe with two-party political systems, and the rise of movements challenging them. But she has been careful not to delve into the racist politics of the likes of Marine le Pen’s Front Nationale.

The negative so-called non- political or ‘I’m a leftie’ approach might soon have to change. In a matter of weeks Fox will be voting on legislation in the House of Lords, which she has called an ‘unelected Chamber’ and ‘an affront to democracy’.  Bills scheduled for the Lords in this session include laws on asylum support; facial recognition technology; and clean air.

Unless she embarks on a massive binge of abstained votes, Baroness Fox/Foster will have to show her true political hand, inevitably creating a profile based on her voting behaviour in the Lords. Will she be able to call herself a socialist then? And how will her non-comrades in the non-political LM non-Network react?

The Baroness clearly has a healthy appetite. This time she may have bitten off more than she can chew.