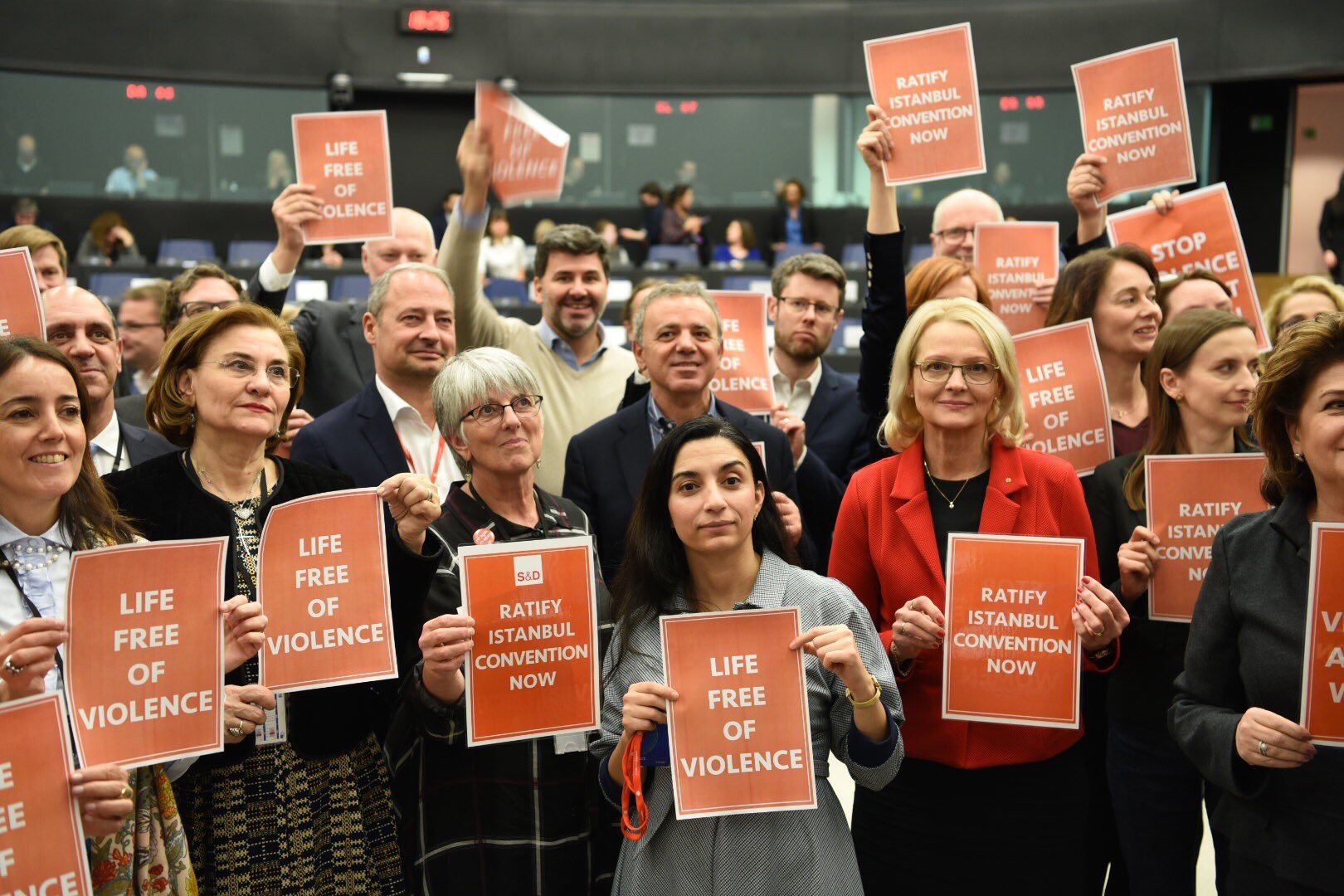 In February 2018 I received news that 34 year old Teodora del Carmen Vásquez’ was to be freed after serving 11 years of a 30 year sentence for aggravated murder following the birth of a stillborn baby. Teodora was one of 17 El Salvadoran women whose cases were at the centre of a campaign initiated in 2014 by a Citizens Group for the Decriminalisation of Abortion, many of whom were victims of rape or whose babies are medically unviable. Meanwhile 19 year old El Salvadoran Beatriz Hernandez Cruz had been sentenced to 30 years in jail after she gave birth in a toilet without even knowing she was pregnant; Beatriz was the victim of repeated rape by a gang member.

I knew the details of these cases because of my work in the European Parliament where I put human rights front and centre of my approach. We passed a successful resolution calling for the release of these women and for an end to the inhuman laws that continued to criminalise women like them. Women’s rights are of particular concern to the EU institutions as gender equality is a core principle enshrined in the European Union treaties and continues to underpin the bloc’s relationships with other countries. Whilst the U.K. government has been embarrassingly slow to ratify the Istanbul Convention (on eliminating violence against women), the EU decided to become a party to the agreement through accession, thereby strengthening its role as a guiding force for Member States. The hard Brexit being pursued by the Conservative government risks the U.K. becoming more susceptible to regressive views on a range of topics with a danger, for example, that the Victorian values of the DUP and figures such as Rees-Mogg could shift policy in a subtle and dangerous way.

The European Parliament has an active Human Rights sub-committee within the Foreign Affairs Committee, but human rights can and should be everyone’s business. I became active initially through my work on Women’s Rights, and also as a Child Rights campaigner, but very soon I found myself speaking up for imprisoned journalists and dissenting voices, writing letters of concern to Presidents, Prime Ministers, Heads of State, Foreign Ministers and the EU’s High Representative, Federica Mogherini, who often took up these cases with considerable success.

The EU’s role as a powerful actor in the field of human rights is not widely known. When I took up my mandate in July 2014 I was amazed at the level of attention I received from human rights activists and organisations seeking to build a rapport with the new legislature, anxious to press the cause of long-running cases in rogue states, or to warn of growing dangers to civil liberties. Every plenary session in Strasbourg the European Parliament tables debates and motions on ‘human rights urgencies’. These motions are generally agreed by the main political groups, and resolutions are then passed condemning inhuman and degrading treatment, torture, detention, unfair trial, death penalty, the limits on freedom of speech, discrimination on the basis of race, religion, gender, sexual orientation, and so on. Notable cases included the Crimean Tartars persecuted by the Russians, the homophobic rounding up of apparently gay men in Chechnya, loss of indigenous rights in Brasil, threats to persons with albinism in Malawi, child slavery in Haiti, concern regarding the Uyghur detention camps in China, condemnation of the Hong Kong authority’s heavy-handed approach to democracy protesters, and many more.

I can report that our work frequently bore fruit. When I joined my colleagues in calling for the Bahraini authorities to release Nabeel Rajab, director of the Bahraini Centre for Human Rights, in July 2015, I was thrilled to see him released 2 days later. Our criticism of the treatment of Iskander Yerimbetov, a Kazakh political prisoner, enabled him to have family visits, and eventually to be released and seek exile in Switzerland. My resolution condemning a proposed Ugandan anti-gay law caused the government to press pause and rethink its relationship with one of its most crucial development partners. An urgent intervention to stop the extradition of a Turkish educator from Kosovo was immediately successful, much to the relief of family members. My twinning with the HDP Kurdish MP Leyla Birlik resulted in her early release from detention following my attempt to visit her in prison.

Human Rights cases are also raised by MEPs when debating more general issues appertaining to the EU’s relationship with specific countries, for example when highlighting the increasing unrest in Ethiopia and the government’s crackdown against opposition voices and civil society in Ethiopia, or assessing the tense post-election environment in Kenya. As a key member of the European Parliament’s 2017 Election Observation Mission to Kenya I was later asked to lead a plenary debate for my political group. As my staff were preparing notes for my speech we began to receive reports of state violence against the indigenous Sengwer Forest People who were defending their traditional way of life, under threat from a supposed conservation project. The information was from Frontline Defenders, one of the trusted NGOs with whom I built a close working relationship. Just 20 minutes before I spoke in the chamber we received confirmation of a military attack that had resulted in a Sengwer death. I included this information in the speech and shortly thereafter the controversial conservation project was suspended. In 2019 I welcomed the Sengwer leader to the parliament and brokered a crucial meeting with the European Commission to try and undo the damage that had been done regarding trust and confidence.

The European Parliament’s Sakharov Prize for Freedom of Thought also provides a platform to raise awareness of human rights. Previous laureates have included Nelson Mandela, Malala Yousafzai and Ukrainian filmmaker, Oleg Sentsov. I was particularly active regarding Sentsov’s case from both a human rights perspective and as a supporter of freedom of artistic expression. Arrested by Russian agents in 2014, Sentsov was tried on trumped up charges and condemned to 20 years imprisonment. Following a much publicised hunger strike in his gulag prison cell Sentsov was finally released in 2019 and came to the parliament in Strasbourg to receive his award belatedly in person and plead for remaining political prisoners whose cases were less well known.

As another International Day for Human Rights passes in a world increasingly gripped by nationalistic fervour we should pay more attention to the loss of rights at home and abroad. Worryingly, the coronavirus pandemic has become a convenient smoke screen for many states where freedom and democracy are under attack, not least here at home.

Brexit will mean a tragic loss of freedom of movement from January 1st, 2021, depriving millions of the right to live, work, travel and study across the EU. Meanwhile, The Conservative Government has already withdrawn the U.K. from the Charter of Fundamental Rights which strengthened all our rights providing a gold standard across the bloc. Now it is threatening to take us out of the European Convention on Human Rights and rip up the domestic Human Rights Act. We are about to enter a very dark period in our national history. The desperate pursuit of international trade agreements by a hard right government threatens to sideline human rights as we have already seen with arms sales to Turkey, Saudi Arabia and other despotic regimes. Despite the sterling work by the Campaign Against the Arms Trade in winning a case against the government regarding its role in fuelling the humanitarian crisis in Yemen, shipments have resumed with enormous dividends for shareholders. All credit to CAAT who, undeterred, are mounting further legal redress.

Human Rights must be championed at all levels from children learning about their rights in school to the fight for voting rights for EU citizens in the UK who were disenfranchised in the 2016 elections and are still fighting for their basic rights to participate in democratic processes. This is certainly not a time to stand on the sidelines. Our rights were never given but fought for and we owe it to the brave human rights defenders who continue to stand up around the world, often at great personal cost, to join the struggle. You can show your support throughout this month by participating in Amnesty International’s Write For Rights campaign. I learnt about the power of words to save lives and defend freedoms in a European framework. Now, sadly, outside the EU we must redouble our efforts.

An earlier version of this article appeared in The Fabian Society magazine in May 2018.