Hundreds of visitors went to a wool fair at Harehope Quarry, Weardale where they had the chance to learn about traditional crafts. 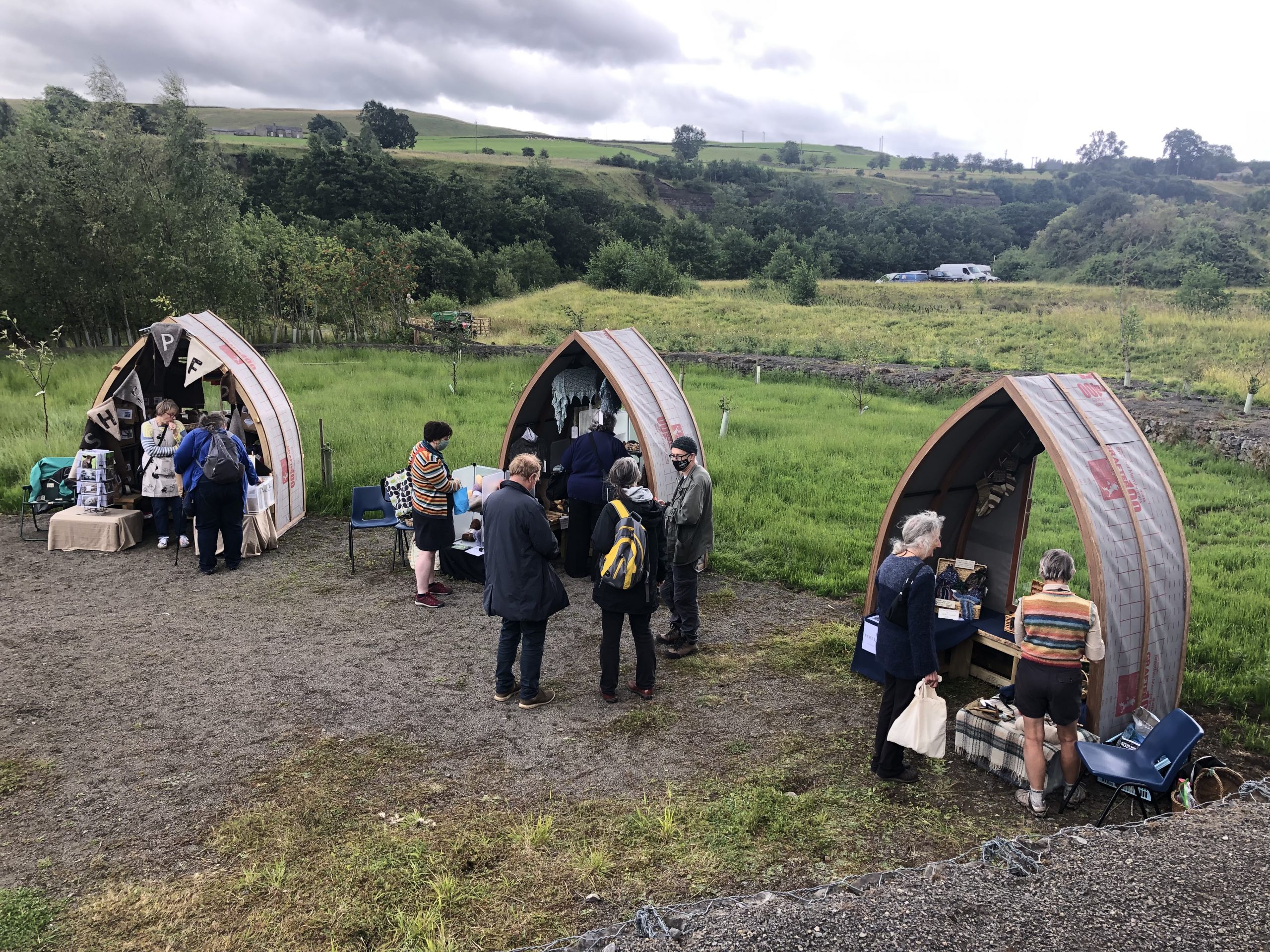 Hundreds of people flocked to a former limestone quarry in Frosterley, Weardale, on 13 August to learn more about traditional woollen arts and crafts. The ‘Summer Wool Event’ was organised by North Pennines Wool, a network of small-holders and craft workers established in 2009 to help promote the local woollen industry and the North Pennines which is a designated Area of Outstanding Natural Beauty.

Between 2010 and 2016 the network had organised seven annual wool events in Lanehead, St John’s Chapel and Hexham. They also compiled a network of wool producers and wool businesses and came up with products to promote the North Pennines through wool. This included a competition to create a North Pennines ‘Gansey’ proving that traditions can evolve, change and innovate.

After this initial burst of activity the network became dormant but the recent pandemic demonstrated the urgent need for members to be proactive in order to survive.

An opportunity to connect at Harehope Quarry

Ellie Langley, a shepherdess and craftswoman based in Weardale, said, “I knew that there were many small businesses, just like me, who had found the past eighteen months devastating in terms of no, or vastly reduced, income in the absence of events, and who desperately needed an opportunity to connect with some of their customers.”

Ellie came up with the idea of locating the Summer Wool Event in Harehope Quarry which operates as a nature reserve and education centre run by a co-operative. The enterprise had recently added outdoor ‘teaching pods’ to their facilities and Ellie could see how these could be used by exhibitors who needed a modicum of cover in the event of rain.

Fifteen different enterprises were represented at the event including Debbie Zawinski, the ‘Feral Spinner’, who spent all day demonstrating stick spinning, and Tom Mercer from Harehope Quarry who demonstrated the use of Swedish ‘Fire Logs’ grown on site. Fransje of Deneburn Meadows demonstrated spinning with the North Pennine’s Wool Group Great Wheel and there was an abundance of fleeces and yarns for keen crafters to purchase along with patterns and instructions. Meanwhile for those with less time on their hands there was a huge variety of unique woollen goods for sale including knitted clothes and accessories, felt hats, toys and wall-hangings.

Tom and his partner Jill Essam live on site in an eco-friendly self-built lodge powered by alternative energy. They also manage a flock of sheep and provided a close up encounter with a ewe and lamb as an added attraction. For the young (and young at heart) there was a specially created ‘Boggart Trail’ to enable safe exploration of the site.

The event was organised and run entirely by volunteers and attracted people from as far afield as Doncaster, Lancashire and the Scottish Borders as well as from across the North East.

Speaking after the dust had settled, Ellie said, “Numbers far exceeded our wildest expectations. Previously, we would typically attract around 300-400 to events. We had no idea what to expect due to the Wool Group being inactive for a time, having a new venue, Covid-19 and so on, but based on the number of cars, we estimate that there were at least 600 visitors, possibly as many as 800.”

Janet Matthews, a founding member of the North Pennines Wool Group, said, “It was lovely to see so many people enjoying the surroundings and the products”.

Jill Essam also reflected on the benefits for the co-operative, “This is the first time we have used the whole of Harehope Quarry for an event like the Summer Wool Event. We were delighted it was so successful and feel encouraged that the organisers of this and other events are keen to explore outside venues.”

“We thought Harehope Quarry was the perfect setting,” added Ellie, “and we hope our Summer Wool Event has helped to put the venue on the map as somewhere people might consider hiring for courses, workshops, parties, or a whole host of other possible events.”

For myself, I had intended to pop in for a brief visit but ended up staying until the end, enjoying the opportunity to be outdoors trying out different activities and buying special gifts for friends and family. We can all do our bit to support the local economy and have fun at the same time.