It was out of the Harlequinade that pantomime developed, with all the character types we know today. 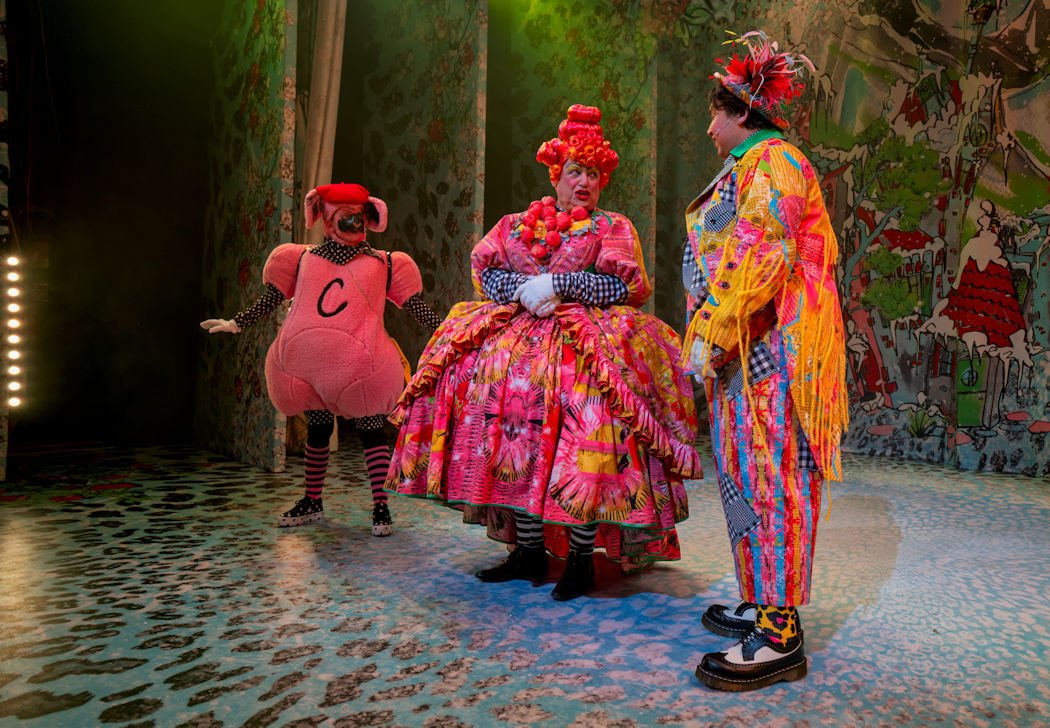 There is certainly nothing, nothing at all, like a Dame

“You know, when I was young, I was all pink and dimples!”
“Aye, and look at you now: all drink and pimples!”

“How very dare you? I’ll have you know I have the complexion of a 16 year old girl.”
“Well, give her it back. You’re getting it all wrinkled!”

“I could have married the Mayor! Yes! I was at this posh reception. I wore my bingo dress.”
“Bingo dress?”
“Yes. Eyes down, look in! I had a beautiful sweet scented rose in my cleavage and the Mayor came up to me, took my hand and bent low to look at the flower. ‘If I kiss your rose, will you blush?’ he asked, and, quick as a flash, I replied, ‘If I pull your chain, will you flush?’”

Oh, I do love a good panto Dame!

It’s about this time in November that I’d be reviewing my first panto of the season. For quite a number of years now Durham’s Gala has always been the first in the North East and it sets the bar pretty damned high.

Not this year, though. No panto at the Gala – and no triumphant return to panto for me!

Actually, that’s misleading. My return was not to writing, directing or performing but I was due to give a talk on panto as part of an exhibition entitled There Is Nothing Like a Dame at the Gala. Now, alas, all three – panto, exhibition and my talk – are Covid casualties.

“We’re both fastidious,” said one of the Ugly Sisters. “I’m fast and she’s hideous.”

One of the great things about panto is that, during the season, the doors of the Old Jokes’ Home are flung wide open and the inhabitants allowed to roam free throughout the land.

Some of the best panto gags and sketches feature the Dame – loud and blowsy and crude and common, man mad, and very much in charge, no matter what the King, Emperor of China or Alderman Fitzwarren may think.

And she’s the very latest addition to the panto cast.

Panto’s origins are in Italy, in the Commedia dell ‘Arte, which reached England first in 1577 but it was the French form of the Commedia, called Italian Night Scenes, which had the biggest effect for far more French companies than Italian came here, giving rise to the Harlequinade, named for Harlequin (Arlecchino), a minor character in the Commedia who became much more important and such a favourite of the English theatregoers that he became the central character, the comic servant who supported the lovers against the miserable old miser Pantalone.

It was out of the Harlequinade that pantomime developed, with all the character types we know today – but no Dame! She came into panto from the English tradition of women not being allowed to appear on stage. Her first appearance was not in panto at all but in the Mystery Plays of the 15th and 16th centuries. I always think that the first panto Dame was Mrs Noah from the Noah and the Flood story of The Mysteries.

But we also find her in another aspect of medieval English culture, Morris Dance. It was in Rapper Dancing, a form of Morris Dance which uses swords instead of sticks, that records first mention the “Betty” (called “Bessie” then) performed, of course, by a man, in a description of a dance performed in the Tyne Valley. So the North East has a place, albeit perhaps a minor one, in the development of panto.

Morris Dancing (and, incidentally, Lancashire Clog Dancing is part of the Morris tradition) is thought to have Pagan origins, so Dame Trott, Widow Twankey, Sarah the Cook and the rest possibly have a history going back to Celtic times!

So panto is a fusion of Italian, French and English influences and is not found anywhere else in the world except places where there is a large British ex-pat community.

And yes, now we can use the word “British” rather than “English” for, having begun as something found only in London where the original “home” of panto is the Theatre Royal Drury Lane which, under the management and part-ownership of Christopher Rich, introduced the Italian Night Scenes and later, when it was taken over by Rich’s son John (1682 – 1761), who took the stage name John Lun, he produced the first pantomimes there.

Actually Lun always played Harlequin because he was a silent character, a mime, and Lun had a thin, squeaky voice!

Other London theatres such as Covent Garden and Sadler’s Wells followed and slowly the genre spread and, by the 19th century, became equally popular throughout Britain.