Local theatre director and writer Peter Lathan reflects on the process of becoming a writer. 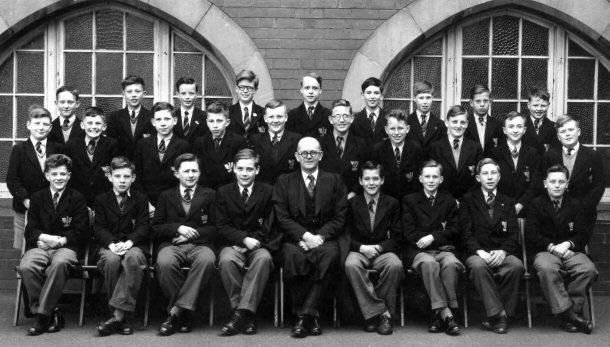 Middle row, fifth from the right – the year of “The Sands of Mars”, my first story for which Peter was paid! Photo provided by author

When I was a boy I wanted to be a famous footballer. Or cricketer. Or, preferably, both. It wasn’t to be, of course. My hand and eye co-ordination was rubbish, mainly because I was extremely short-sighted, a fact that was not recognised until I was around eleven. I did give rugby a try (pun not intended, though it’s as good a joke as you’ll get) but as I needed my glasses to see the ball it was really a non-starter too.

The power of imagination

But what I could do was imagine being a great sporting figure. In that period between getting into bed and falling asleep I’d picture myself scoring the winning goal for Sunderland in the FA Cup Final or notching up a century to win the Ashes at the Oval (or perhaps simply skittling out the Aussies in their second innings) (or even both). Then when I woke up in the morning I’d try to pick up my daydream where I’d left off the night before.

And oh, the daydreams I had! Not just sporting but about every other part of life. I’d be an heroic soldier (I was born during WW2), sailor or airman, or… well, it depended what was in the news or occupying an important space in my consciousness at the time. I even remember going through a period of imagining that every other record requested in Family Favourites or Housewives’ Choice was by me. And yes, I’d sing them all in my mind!

And I fed my imagination. I read voraciously. Kids’ books, of course: the Billy Bunters, the Lone Pine series, even the Famous Five and the Secret Seven. Never could get away with Swallows and Amazons, though. As I grew older I moved on to science fiction and historical novels – I’d jump from Ray Bradbury to Baroness Orczy, from Robert Heinlein to Rosemary Sutcliff, and possibly take in a bit of Dickens on the way, and all this before I was a teenager. Being only able to take two books out of the library was almost torture – I could read them in two nights!

In my first year at grammar school we became – just briefly in typical schoolboy fad fashion – an entrepreneurial lot. One of my classmates, a lad called Tony Metcalfe, saw a hole in the market and set up ‘Metty’s Ink Service’. In those pre-biro days of fountain pens he always had bottles of ink of various colours in his bag and would sell you a refill for a penny if you ran out during lessons. It was worth it: the least you’d get if you arrived at a lesson with a dry pen was a good telling-off.

“You are here to learn to use the divine instrument of Shakespeare, Milton and Shaw, not to serve your apprenticeship as a feature writer for The Beano.”

Producing my own comics

As for me, since I devoured boys’ comics like The Eagle, The Hotspur and The Rover, I produced my own and hired them out to be read at a ha’penny a go! I remember just one story. Well, to be strictly honest, I remember the title of just one story, The Sands of Mars. Our form teacher caught one lad reading it and remarked, “What an imagination you’ve got, Lathan.” I’m not sure quite how he meant me to take that but I was quite flattered.

Unfortunately my writing talents were not appreciated by the Head of English when I was in fourth year and we were to write an essay describing a busy street scene. I decided that this busy and bustling scene needed a busy and bustling writing style.

At the top of the first page he wrote, “Can this be true?” and at the foot, “Alas, it is! I dread turning over,” and at the end (after four sides of foolscap – I’d been inspired) he commented, “You are here to learn to use the divine instrument of Shakespeare, Milton and Shaw, not to serve your apprenticeship as a feature writer for The Beano.”

Not to be put off

Was I devastated? Did it put me off writing for years? Like hell did it! I loved it and by the end of the day everyone in the class had read both essay and comments – the largest readership I’d ever had for anything I’d written up to that point! It went the 1950s equivalent of viral in the school, for word quickly spread to other classes in our year.

It didn’t put me off writing but what with drama and working for ‘O’ ‘A’ and ‘S’ Levels I didn’t have much time for it until I got to university when I first turned my hand to poetry. I shall draw a discrete veil over that, for the best way I can come up with to describe my efforts would be “pretentious shit.” Almost none of it exists any more, even in my memory. Thank God, for I squirm in embarrassment at the few odd lines that have somehow escaped being cast into the outer darkness. And don’t ask! I am not going to exhume them, even for comic effect.

So that’s it – sporting failure, entrepreneurial spirit and overcoming scorn led to my becoming a writer – and a realistic assessment of my abilities led to my abandoning any pretensions to becoming a poet.

The things one’s future hinges on!