Brendan McBear and Chris Humble continue their journey through Middle England, this time they reach Derby and St Alkmund. 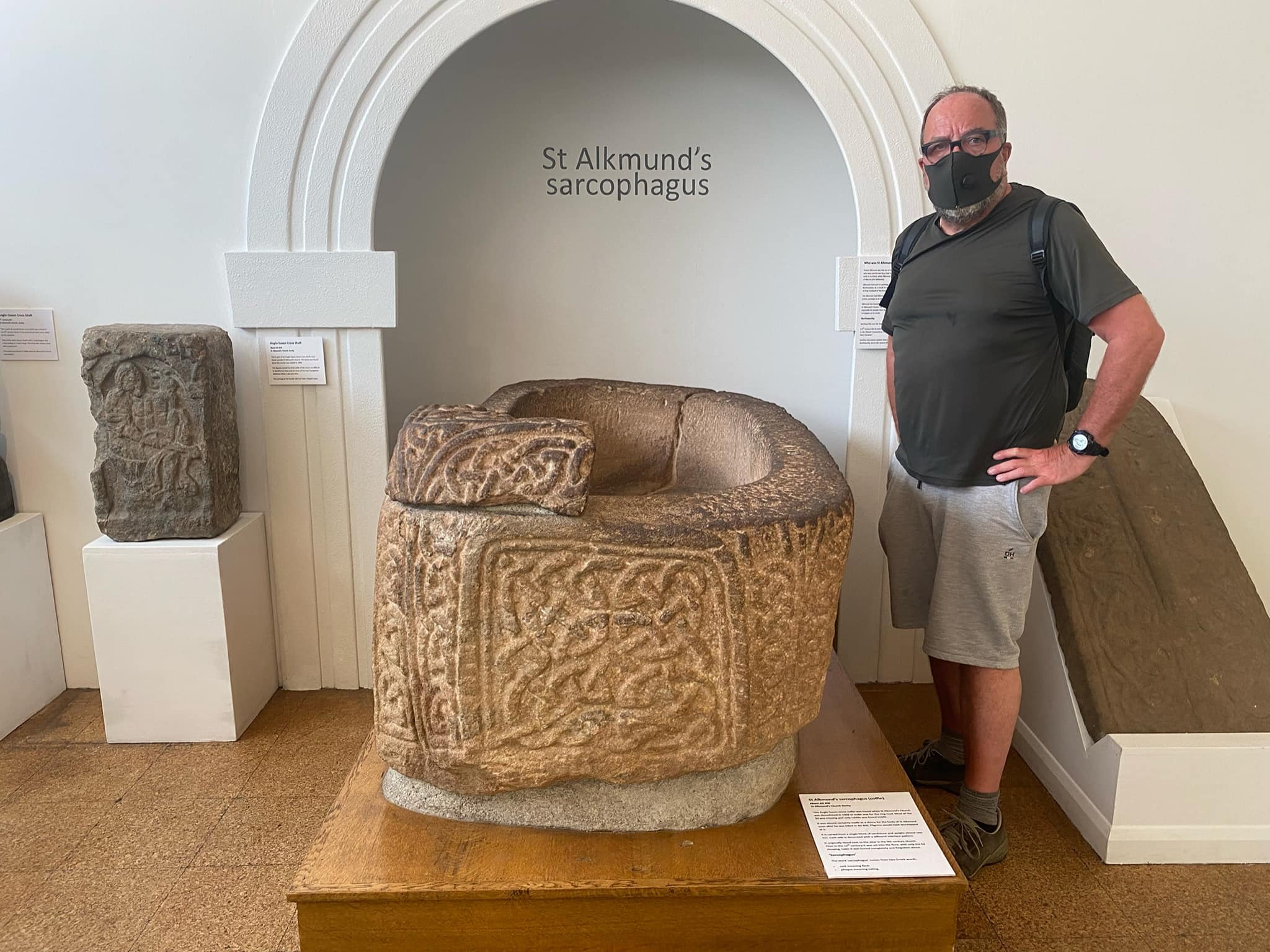 Photo provided by the author

“We’re in Derby! B.E. And I have teamed up with labyrinth deity Jim Bailey to search for St Alkmund and others, and also look for twirly things on the ground that I don’t understand…”

Thanks Brendan; we have also finally met up with the sun, after a depressingly long absence.

Born a prince, the son of Northumbrian King Alcred, he was renowned for his charity to the poor and orphaned. However, he was exiled to Pictish Scotland, and murdered in 800 at the tender age of 26 by agents of the usurping King Eardwulf.

He has six English churches dedicated to him. He did a fair bit of travelling after his death in Shropshire, being buried in Derby, later moved to Shrewsbury and finally returned to Derby in 1140, during which move his coffin was said to exude a smell of perfume.

Up until the 18th century pilgrims reported miracles after placing their backpacks on the lid of his tomb.

“Sure if the Big Eejit hadn’t left our backpack in the Travelodge we could have popped it on his sarcophagus in Derby museum. I’d be quite partial to a miracle or two at this point, starting with the eejit remembering to take my photo more often!”

Yes Brendan, and what a marvellously intact and ornate sarcophagus it is, with its fantastically preserved Celtic knotwork.

The discovery of his sarcophagus, which was found when the local authorities demolished his church to make way for a bypass in the 1960s is perhaps the only positive from what many locals still regard as an act of corporate vandalism. Rather adding insult to injury, the council commemorated him with a stone plaque on one of the resulting flyovers! His well is located in the middle of a housing estate on the outskirts of the city and is sadly neglected and fenced off.

“But that didn’t stop the eejit from going in for a closer look – the lad’s obsessed with climbing over fences so he is!”

We hung around Derby longer than strictly necessary in order to have fun with Jim and Amy and visit some more pilgrim sites both wonderful and weird. These included Dale Abbey Hermitage Cave (where we were treated to a fly-by from a magnificent pair of red kites), Ingleby Anchor Church Cave, and Watnall Holy Well, where Jim had us creased by applying ridiculous quasi-spiritual names to the various toys etc left by previous visitors. I give you, ‘the legless goose of wildness’, ‘the saintly rabbits of bewilderment, the gnome of holy anticipation, and the manatee of self-righteousness’!

“For once I was not the most exotic creature on display”.

Yes Brendan, it makes a refreshing change for you not to be the centre of attention!

I can’t say I’m very taken with Derby as a place, but the people are very friendly, kind and helpful; more so than I’ve experienced in any other city. The best example of this was on one bus journey, when there was a change of drivers. As the new driver climbed aboard he cheerily greeted the whole bus ‘good morning everyone’ and received a surprisingly warm response.

Muddle in the middle

We were close to the very centre of England, cartographer calculated and marked as a precise point on my OS map.

13 miles north of Derby, we could see that it was on private farm land, but were hopeful that the land would be owned by a friendly farmer. Jim had prepared a small capsule containing a blessing written on a labyrinth, and we hoped to bury it in the spot.

Best laid plans etc. We found the farm with no problem, but also found it to be fronted by 12 feet high gates and an intercom which went unanswered. Not promising.

We asked at nearby farms and were eventually able to obtain a mobile number for the farm’s owner. The call was diverted to a gentleman who explained that the owner was currently on a flight back from Portugal and we should try in a few hours. We decided against this, feeling that the owner may not be happy to be bothered immediately on his return, especially if – like so many unfortunates – that return was earlier than planned due to our government once again playing disco with their ‘traffic light’ system. We will (hopefully) return…

You can read more in this series of articles.