“The government must rethink its flawed approach and discourage overseas holidays" 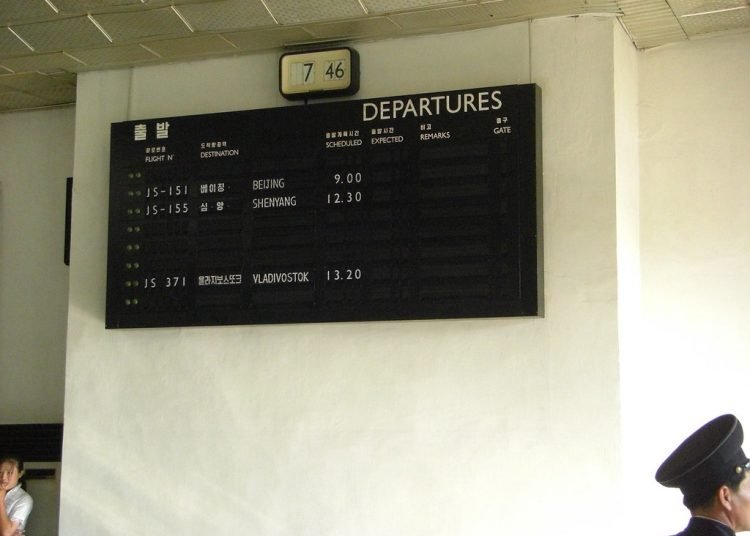 "Departure Board. Sunan Aiport, North Korea." by (stephan) is marked with CC BY-SA 2.0.

The government has been accused of being “incredibly short-sighted” for confirming plans to reopen international travel, despite concerns about passengers mixing in airport queues and a sharp rise in cases of the Indian variant.

It comes after evidence to the All-Party Parliamentary Group on Coronavirus highlighted the significant flaw in the government’s traffic light system, which currently allows people arriving from ‘red’ countries hosting variants of concern to mix with those arriving from green list countries in overcrowded arrival halls.

The APPG on Coronavirus published a report earlier this week calling on the government to discourage overseas holidays while providing financial support to the travel industry, to reduce risk of new Covid variants fuelling a third wave. The report also demanded urgent measures to reduce overcrowding at airports, separate out passengers arriving from red list countries and improve the detection of fake Covid test certificates.

Speaking at an APPG evidence session on Tuesday this week, a representative of the Airport Operators’ Association warned that some airports were seeing “queues out onto the tarmac”.  He called on the government to urgently digitise passenger locator forms to enable arrivals at UK airports to use e-gates and reduce long queues, describing the current deadline of autumn as “preposterous”.

Layla Moran MP, Chair of the APPG on Coronavirus, said:

“It is incredibly short-sighted for the government to be giving the green light to overseas holidays on the same day that serious concerns about the Indian variant have been confirmed.

“We know that international travel and variants pose the biggest risk to our hard-won progress against Covid-19. We cannot allow farcical scenes to continue in which those arriving from red list countries are mixing with others in overcrowded arrival halls, potentially allowing dangerous variants to spread.

“The government must rethink its flawed approach and discourage overseas holidays while providing proper financial support to the travel industry. This will give time to introduce the measures needed for airports to cope with additional demand and reduce the health risks posed to passengers and staff.”

Those of us in the richer parts of the world may be excited at being able to travel abroad for our summer holidays. Perhaps we might pause to consider the Indian variant. Cases of the B1617.2 Indian variant have more than doubled to 520 over the past week, figures published today by Public Health England (PHE) have revealed, with almost half the cases are related to travel or contact with a traveller. The strain was also designated a “variant of concern” today.

There are many reasons not to be complacent. Tedros Adhanom, the head of the World Health Organization, underlined that more cases have been reported in the past two weeks than in the entire first six months of the pandemic, with south Asia bearing the brunt. Today’s Guardian reveals how richer countries impact the crisis in poorer parts of the world. India’s tragedy could be followed by Africa’s, campaigners warn, as wealthy nations fail to extend vaccines – and decide who will live or die.