Inside the Lions’ Den: Why England’s success is upsetting for Simon Clarke MP

Simon Clarke, MP appears to have a number of issues with the views and stance of England manager, Gareth Southgate 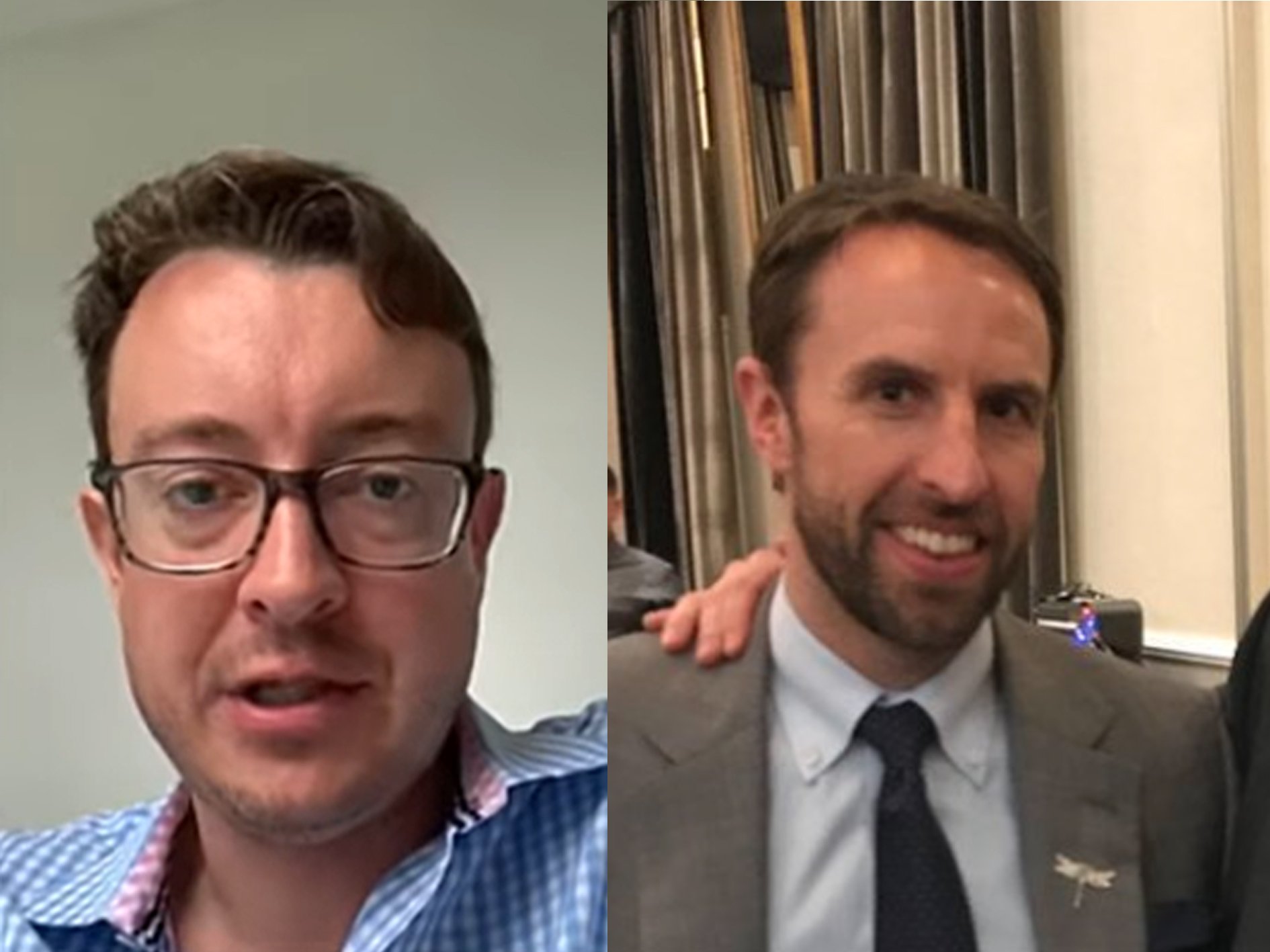 It must be heart warming for Gareth Southgate to know that he has the enthusiastic approval of Tory MP, Simon Clarke. Clarke had this to say on Twitter on 11 July:

It wasn’t always that way.  Clarke’s opinion of Southgate seems to have been transformed as recently as 29 June, when he tweeted:

Unfortunately he does not make clear what the redemption is from.  Presumably, it was redemption from the opinion Clarke had of him up until 28 June, which may have been much less positive.

Controversy began in earnest for Southgate at the Riverside stadium in Middlesbrough in early June at a friendly against Austria, when the players were booed by fans at the beginning of the match. To begin with, it didn’t seem like a major disruption. The Daily Mirror’s live coverage states simply,

“There’s some booing as the players take the knee, which is as depressing as it is predictable. It’s quickly drowned out by applause.”

The incident triggered a huge amount of comment on social media, however, and six days later Southgate published  an open letter to fans. His promotion of the gesture by players was unequivocal, and his intolerance of those who opposed it equally stark:

“I have never believed that we should just stick to football…

“It’s [the players’] duty to continue to interact with the public on matters such as equality, inclusivity and racial injustice, while using the power of their voices to help put debates on the table, raise awareness and educate…”

“Unfortunately for those people that engage in that kind of [abusive] behaviour, I have some bad news. You’re on the losing side. It’s clear to me that we are heading for a much more tolerant and understanding society, and I know our lads will be a big part of that.”

In the early stages of the tournament the reaction of his opponents took various forms. Some, like Tees Valley mayor, Ben Houchen, criticised his management of the team – “Bobby Robson he ain’t”, he tweeted at one point before being forced to eat his words as the victories on the pitch kept coming. Others targeted the politics of the ‘taking the knee’ gesture.

Clarke, on the other hand, had little to say in the early stages, confining his effort to retweeting the following on 10 June:

Just a retweet, but this was not the first time that Clarke had shown disapproval of Black Lives Matter (BLM), that being the ‘organisation’ referred to in Hughes’ tweet, and perhaps now, by extension of the actions of Southgate and the England squad. In December 2020  Simon Clarke, MP tweeted:

“Racism is an evil that demands our common determination to defeat.  But the BLM movement has a specific and controversial political agenda … We cannot conflate one with the other”.

Earlier in 2020 he had had quite a bit to say about the BLM agenda in relation to the removal of statues. He took exception to the reputations of some of the great men of English history being called into question by the BLM movement, and provided a short history lecture to explain to them the error of their ways.  Sadly for Clarke, he begins his intervention by dropping a clanger.

First of all, someone needs to have a quiet word in Clarke’s ear about the emergence of the nation state, because it didn’t happen 1,200 years ago.  Secondly, “rewriting parts of that history … does not bring enlightenment” should have the nation’s historians choking on their cornflakes – “that’s it lads!  You can pack your things up now.  Job done . We’ve got everything we need now!”

Somehow, Clarke managed to obtain a degree in history without appreciating that any account of the past that is not open to reinterpretation in the light of new evidence or new perspective is not history. Once a version is set in stone it is myth. And, in reality, it is a myth of England’s past that Clarke sets out to defend.

When questions started to be raised about Gladstone’s connections to slavery Clarke tweeted, “Gladstone now.  The greatest Liberal Prime Minister.  You see where this is going?” (as reported in The Times).

So, for Clarke, there is no contradiction in objecting to people who might try to “impose today’s morality on people from a different era”, and his belief that “the United Kingdom has been a force for good in the world”.  Once the past has been mythologised, people like Clarke can make vacuous moral judgements on the back of it, while those who challenge the myth can’t.

This is precisely what the BLM movement set out to do, which is profoundly unsettling for Clarke. All the more so when people as popular as the England football team seem implicitly to be supporting it.  Clarke’s dystopia now sees the light of day.

Priti Patel,  on a visit to Redcar, called taking the knee ‘gesture politics’ and she is right. The problem for her and for Clarke is that the gesture has turned out to be an extremely powerful one.  And Clarke and Hughes have inadvertently made things worse for the defenders of English mythology by choosing this moment to try to further demonise the BLM movement.

It’s tempting to treat the online abuse of players, and the defacing of the Marcus Rashford mural in Manchester as the racism against which the players’ gesture is entirely directed. That’s the kind of racism that Clarke can wring his hands about.

Beyond that there are the inequalities in terms of higher unemployment rates among ethnic minorities, overrepresentation in the prison population, accusations of being unjustifiably targeted by police on the streets, and so on. The kinds of things that are encapsulated in the ‘defund the police’ slogan that Clarke’s colleague, Eddie Hughes, would like to paint as controversial, when in fact it is nothing of the kind (it’s controversial only in the United States, given that contained within it is a demand for something approaching European levels of public service and welfare).

Finally, there’s the matter of dealing with the past.  The past for which those who, like Clarke, would glorify Cecil Rhodes and William Gladstone and seek to control the narrative. To create an image for the past, in which the ugly and inconvenient bits are forever out of focus, the bits that expose British Imperialism as less than benevolent are excluded.

Which brings us to the question of whether Southgate’s optimism is well founded when he speaks of a “more tolerant society”. Clarke denounces racism but is quick to demonise BLM. For Clarke, BLM is addressing the wrong sort of racism, not least because it addresses the kind of racism in which he is complicit.

Southgate writes of the need to educate. In order to educate people about racial injustice we require the material with which to deliver that. And that is something which Clarke and his fellow polemicists cannot control.  Because that is the work of researchers and writers, people whose intellectual effort can be held back only by censorship. Clarke has been careful so far not to align himself with those Tories who would approve that.

Beyond that, the optimism is on less firm ground. Up against it is the hostile environment of the traditional Tory values of the conservation of privilege and also the pork barrel politics of the Towns’ Fund, the reduction of overseas aid, the tolerance, even approval, of the inhumane treatment of refugees. The politics, not of social responsibility, but of ‘we don’t care as long as we get something out of it’. It’s a political environment in which the voice that is demanding social cohesion and civic responsibility struggles to be heard.

It remains to be seen whether reaching the finals of Euro 2020 provides a big enough megaphone for that voice to prevail.