Primary school children had a fantastic experience of seeing The Two Fridas as part of Billingham International Dance Festival this week. 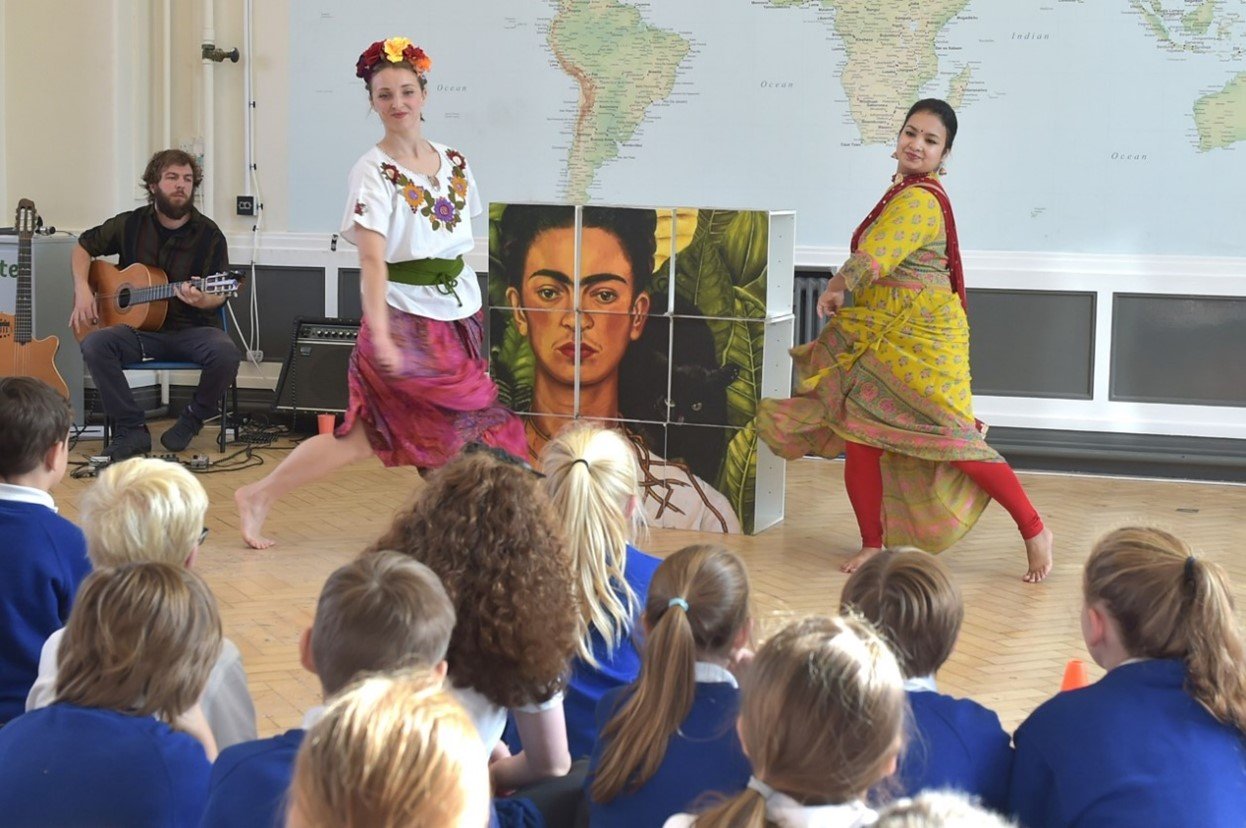 Pentland Primary School in Billingham hosted the two final performances of Balbir Singh Dance Company’s enchanting ‘The Two Fridas’ this month. Nearly two hundred of the school’s students aged between seven and eleven had the privilege of seeing a gem of performance art they will always remember.

Billingham International Folklore Festival of World Dance and Balbir Singh Dance Company collaborated to bring this dance-theatre production to the North East. Its title ‘The Two Fridas’ is taken from Frida Kahlo’s 1939 famous self-portrait of that name, a painting which was bought by the National Institute of Fine Art in Mexico City for the highest price she was ever paid for a work in her lifetime.

The title also references the painter Amrita Sher-Gil who became known as the ‘Indian Frida Kahlo’; both had mixed nationality heritage, and both explored differing aspects of their own feminine personalities in their work. A self-portrait by Sher-Gil entitled ‘Young girls’ was awarded Gold Medal in the Paris Salon in 1933.

It was entirely fitting that these final performances took place against a background of the world map, Kahlo chose to live in Mexico, and Sher-Gil in India.  The themes of the dance were an exploration of the lives, the times and the work of these two important visual artists. As part of Pentland Primary School’s weekly Arts and Culture engagement, this was an inspired choice. Miss Watson, curriculum leader for Arts at the school said:

“We had a wonderful day based around ‘The Two Fridas’, and the children thoroughly enjoyed every aspect of the performance. Hosting this has been a super opportunity to enrich our Arts curriculum and the children’s art appreciation”.

“I really enjoyed it. My favourite part was when the dancers were all twirling – I just loved that! I learnt about painters that I’ve never heard of before”.

Students and staff discussed the cultural significance of ‘The Two Fridas’. The students reflected on their emotional responses to it, and created their own artworks about the experience.  Their reactions are revealing of their understanding and enthusiasm for Art.

Scarlett in Year 5 said: “The music and dance fitted together perfectly. The artists were like me; I express my feelings too and you shouldn’t bottle things up”.

Rhys, also in Year 5 said: “I really enjoyed the performance. It is really clever how emotions and stories can be shared through the arts”.

“We hope that ‘The Two Fridas’ has helped the children to develop a love of the arts, and enrich their cultural awareness. It is also important that [they] begin to appreciate the wider world and that no matter where we may live in this world, we share the same fundamental values”

She emphasised Pentland School’s appreciation of Billingham International Folklore Festival of World Dance, the cultural enrichment it brings to the community of Tees Valley, and the school’s delight in being able to host two performances of ‘The Two Fridas’.

The role of performing arts in society

Olga Maloney, who is Artistic Director of the Festival commented on the finale of ‘The Two Fridas’, which has reached nearly four hundred and fifty children in three schools the North East, and has delighted other audiences at performances across the region.

“What an amazing way to finish our Summer Tour by performing to hundreds of young people across three Tees Valley schools. The response by audiences to ‘The Two Fridas’ has been heart-warming. You always want your work to strike a chord with people, but the reaction to the story about these two real-life iconic artists has been special to witness. We have been in a privileged position to entertain North East audiences and to help inspire the artists and dancers of the future. Dance-theatre breaks down barriers and we consider ‘The Two Fridas’ to be an opportunity to reach out to so many people.”

The children of Pentland Primary School in Billingham are lucky to have had this opportunity, and fortunate to have a teacher who has the insight and dedication to introduce them to the importance of visual and performing Arts for their lives.