In 1984 an arts and disability agency for the north of England encountered the tail-end of the mass segregation programme that resulted in millions of people with mild to severe physical and mental disabilities being locked away in large institutions, forced to do menial work for pocket money and with little say about any aspect of their lives. 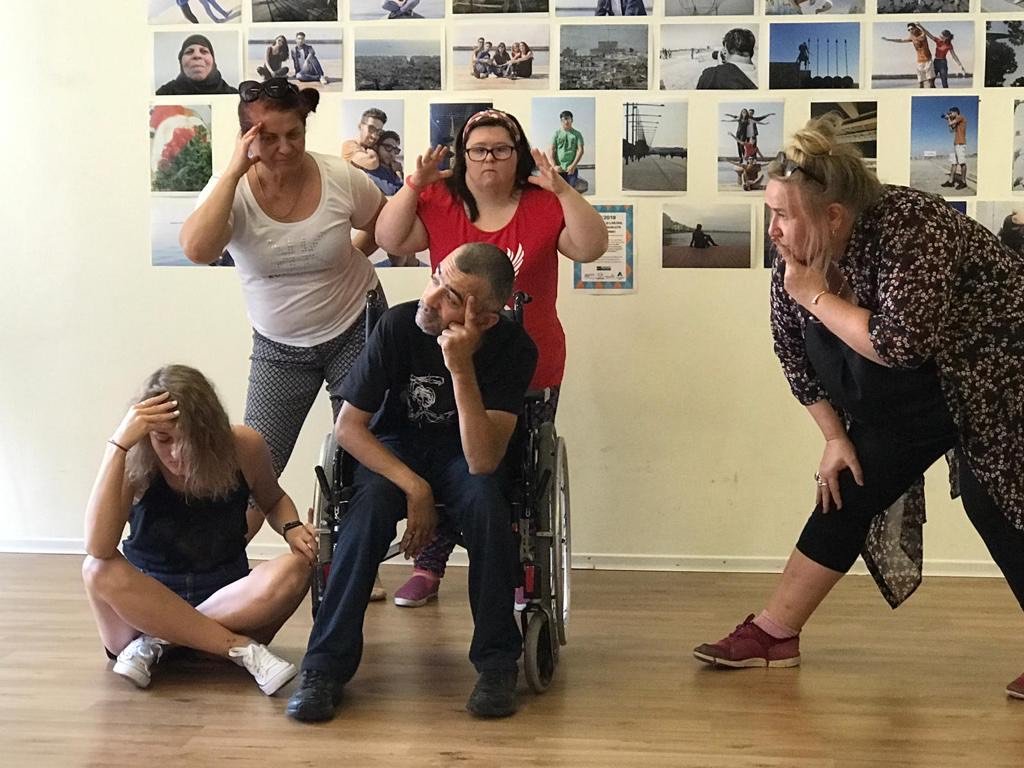 With the twin crises of Brexit and coronavirus threatening to deepen inequalities and further entrench the poverty already killing so many as a result of a decade of Conservative austerity measures, as noted by the UN Rapporteur on Extreme Poverty, the International Day for Disabled People on December 3rd provides an opportunity to take stock of progress across different sectors.

As Nelson Mandela said, education is the most powerful weapon to change the world. It is also deemed to be the key to a fulfilling and prosperous life. On all counts we must do better then, especially regarding FE and vocational training opportunities for people with disabilities, and where better to start than the performing arts, a field that seems to offer potential for so many excluded from the mainstream.

The welcome but slow move away from segregated education to inclusive education has sadly not yet translated into a significant number of job opportunities for people with disabilities in the arts. However, the informal and non-formal sectors have often led the way, creating quality participatory opportunities that bring benefits to able-bodied people as well as their disabled peers. Elsewhere, progress has been achieved through a combination of performance art and protest, as documented in the online National Disability and Arts Collection Archive.

In 1984 I found myself running an arts and disability agency for the north of England, and encountered the tail-end of the mass segregation programme that had resulted in millions of people with mild to severe physical and mental disabilities being locked away in large institutions, forced to do menial work for pocket money and with little say about any aspect of their lives. The arts activities that my organisation ran often opened up deep emotional scars from years of abandonment, disregard and abuse. Paintings, poems and performances were littered with powerful symbols of imprisonment and freedom.

It was the late 1980s and the long awaited de-institutionalisation programme of ‘community care’ was just beginning. Whilst many of us welcomed the closing of the large institutions with their locked wards it was clear that the government was not investing sufficient resources for the transition, that the private sector was set to exploit the situation and make huge profits from implementing bare minimum standards, and that society as a whole was not sufficiently disability-aware to welcome the influx of people who were different. This was clearly articulated to the government in a Memorandum submitted to the House of Commons’ Health Committee Inquiry in 2009 by Pat Thane, Leverhulme Professor of Contemporary British History at the University of London. Thane concluded, “Despite well-meaning statements and efforts by successive governments, criticisms of under-funding of social care and poor integration of health and social care have continued.”

Indeed, I had watched as vulnerable people were released into the community without proper safety nets to ensure their wellbeing, and I documented their fears, hopes and dreams as part of a writing residency funded by Yorkshire Arts. We published a moving anthology of personal testimonies, which was featured in the Times Educational Supplement, and I took two contributors from the project on a tour with me and ensured they were paid as professionals for their work promoting the book. This final act was a powerful statement in support of the disability arts movement which has grown from strength to strength in the ensuing years, with pioneering disability-led theatre companies such as Graeae becoming recipients of core funding from Arts Council England, and inclusive dance organisations such as Candoco who tour internationally.

At the same time as adults with disabilities were being ‘released’ into the community, our state education system was beginning to think about becoming more inclusive. Up until then children with disabilities were in ‘special schools’, often miles away from home so either had to make twice-daily long journeys to and from their place of education or else take up residential places at their educational institution. The 2001 Special Educational Needs and Disability Act established legal rights for disabled students (by amending the Disability Discrimination Act of 1996). This act protected SEN (special educational needs) and disabled students from discrimination in all educational settings and paved the way for an inclusive education model.

However, many charitable and voluntary initiatives had already developed after-school and Saturday clubs aimed at bringing disabled and non-disabled children and youth together through leisure activities. For example, in the early 1980s I collaborated with the PHAB youth club movement to create an integrated youth theatre at Contact Theatre in Manchester, and organised inclusive arts summer schools which provided transport, one-to-one carers, sign language and other services that would remove barriers to inclusion. I ran disability awareness sessions for staff and volunteers and delivered training for drama practitioners, creative writers and other artists who were keen to develop inclusive practice.

When the pioneering participation organisation, Investing in Children, was first established in County Durham I was commissioned to design a piece of participatory action research with children with disabilities regarding leisure provision. We made a giant-sized book with life-size portraits of the young research subjects. This book toured the UK, making a bold statement that could not be ignored by decision-makers – ‘nothing about us without us’ became the clarion call.

Much of my early work as an arts practitioner, engaging with people with disabilities, was provocative. We were questioning the very systems and institutions who had thought it a good idea to collaborate with the arts community. But I often found allies within the system – psychiatrists and occupational therapists, nurses and teachers – as well as parents and carers who were critical of the risk-averse society that had mollycoddled the young disabled and stifled their voices.

Government policy eventually caught up with the disability rights movement and began to take a more integrated approach. This coincided with a renaissance in public arts funding and widespread arts in education initiatives including many which addressed the demands of the disability arts movement as a distinct voice that had waited far too long to take its rightful place in the arts ecology. Out of this moment grew companies like The Lawnmowers, Mind The Gap, Carousel, Hijinx, Seven Stars Theatre Company and Heart and Soul, also festivals such Liverpool’s DaDaFest. These disability-led companies didn’t just perform in their own communities but went out and about, touring up and down the country and abroad, often being far more adventurous than their non-disabled rivals.

Headway Arts based in Blyth is an excellent example of this outward-looking enterprising spirit. The company has been involved in several Erasmus+ projects over the years, working with other learning disabled arts initiatives from all over Europe, sharing best practices with the most recent focusing on reflective practice and quality learning in order to raise “the aspirations of young disabled artists so that they are more able to compete in the mainstream.”

Meanwhile, seminal company Mind the Gap joined with learning disabled companies from France and Sweden to create the first Crossing the Line festival, showcasing the end results of a two and half year collaborative practice funded by Creative Europe, an EU programme which the government are disappointingly not currently signing up to.

However, these initiatives remain the exception rather than the norm and in order for that to change we need not only inclusive education at primary and secondary level but vocational training initiatives that remove the barriers to industry entry for people in challenging circumstances.

One initiative that has begun to tackle the dearth of opportunities for early career disabled artists is Diverse Futures, a research project and online resource established by arts organisation Diverse City, that identifies and campaigns for career pathways in the arts for people with disabilities. The initiative won the European Diversity Award for Community Project of the Year in 2015 and Alice Chutter, project producer, noted, “This award is a massive recognition of the rights of all artists to have an equal chance to realise their creative goals and it is an important step towards making sure our national culture is as diverse as the world we live in.”

I encountered Diverse City for the first time in Srebrenica in August 2015. They were part of the creative team assembled by Tina Ellen Lee of Opera Circus for an ambitious long-term global citizenship project, The Complete Freedom of Truth (TCFT), which was supported at the outset by Erasmus+ in order to develop youth arts leaders and creative entrepreneurship. The talented young deaf dancer and choreographer Billy Read, was also on the team along with his signer. In fact, all the disabled youth arts leaders were supported by key workers and the cost of this had been built into the budget. Projects such as this set the standards that we should all aspire to.

Yet TCFT projects do not generally take place in state of the art accessible buildings in cultural capitals but in the crumbling neighbourhoods of small towns in remote areas, working on the streets and amongst ruins, using the physical environment as an inspiration and backdrop for performative responses to themes of liberty, democracy and union.

Speaking about the effects of TCFT on the participants, Tina Ellen Lee offers this observation: “Most who have participated have become aware of the vital need for inclusion and access for all of our society. Many of us have discovered much about ourselves, our talents, our strengths and vision. We have all made profound friendships.”

Inclusive education and training in both formal and informal settings must become the norm not the exception. Involving young people with disabilities from the outset regardless of perceived difficulties is the key to successful integration bringing benefits for all concerned. It is the barriers created in our minds that are always the most difficult to surmount.

A version of this article was published earlier this year by the American Studies Association at the University of Sarajevo, in Bosnia and Herzegovina.