An interview with Jacky Collins aka Dr Noir who founded Newcastle Noir, a festival that is truly for the readers. 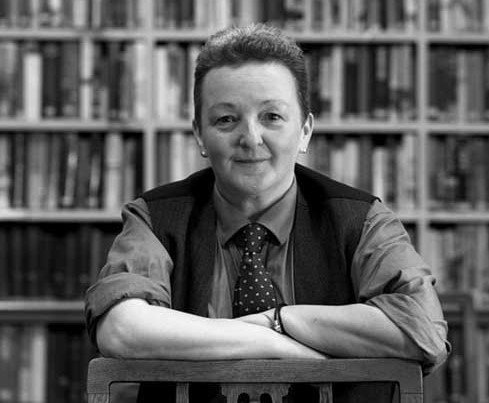 After a two-year hiatus due to Covid-19, literary festival Newcastle Noir is bringing crime back to Newcastle’s City Library on 5 December 2021. I caught up with festival organiser Jacky Collins aka Dr Noir to talk about the festival and our love affair with crime fiction.

Newcastle Noir originally started as a one-day event How did the festival grow from there?

“The audience were instrumental in the establishment of Newcastle Noir. It started as Crime Saturday and was held one afternoon at the Lit & Phil near Newcastle’s railway station. We had three panels and nine authors. There was such a buzz around that afternoon and a great number of people turned up, so we asked the audience if they would come again the following year. We also asked the audience what we would call it if we did hold it again, and they came up with Newcastle Noir.

“From its inception it’s been very much for the readers. We wanted to bring crime writers to the region, so crime fiction readers and lovers in the North East didn’t have to travel far to see their favourite writers.”

Why do you think readers love crime fiction?

“I think in a world where there are so many unsolvable issues, it’s comforting to know that within 300 pages you can watch someone solve a mystery, achieve something, and bring justice – and that justice is a really big element, whether it’s brought by the authorities, or by a private detective, or an amateur sleuth. It’s the idea that someone didn’t get away with murder that’s so important. There are also the high-octane tales of adventure, such as the international thrillers, that transport you to a very different space.

“It is also a way of looking at difficult issues within society. Watching a news report, or a documentary, or going to a talk might be difficult. But if you put an element within a fictional tale, then I can consider it and maybe find it not as uncomfortable. For example, several authors write about the issue of human trafficking and to watch that on TV as fact rather than fiction can be very disturbing, whereas to be able to digest those difficult topics in crime fiction brings understanding and educational aspects as well. A good crime author doesn’t preach at you but leaves you thinking you have better insight into that issue.”

“Another point to add is that because crime fiction readers tend to have the most voracious reading appetites, they are often willing to take a chance on a new author. There is security within the genre given that there are certain aspects that have to be there for it to be a crime novel. However, once those basic elements have been covered the versatility of the genre is incredible to the delight of many a reader.”

Newcastle Noir while celebrating North East authors also has a very international flavour. How did that come about?

“The regional element of North East authors’ work means that I can read my place and read stories that are set where I live, which I feel is important. I also think that favourite series being adapted for TV draws people to the region. They want to walk in the footsteps of characters that they know and love, and it’s powerful.

“The inclusion of authors from overseas came about in a serendipitous way. I used to work at Northumbria University in the Modern Languages department, and back in 2011 I was challenged to develop an area that was important to me but outside Modern Languages. So I started looking at European crime fiction, film and TV. At the time The Girl with the Dragon Tattoo, The Bridge and The Killing were proving very popular, and it made me think about the possibility of bringing Nordic authors to Newcastle. In 2015, as part of the Crime Saturday event, we invited two Icelandic crime writers over – Yrsa Sigurðardóttir and Ragnar Jónasson. It all stemmed from there.

“The last time we held Newcastle Noir in person in 2019 we brought over a group of crime writers from Romania, with the support of the British Council, and writers from Australia and New Zealand. That is one of the most exciting elements of Newcastle Noir, for me. We are bound together by crime fiction, but it’s fascinating to know how the writing happens in other countries, and how the crimes that they write about are developed. I like the idea of having open doors.

“Hopefully in 2022 we can get back that local, national and international author profile to the festival.”

How do you choose the topics for the panels?

“It can be tricky, and I try to let it happen organically, rather than taking one angle and seeing who can fit under that theme. For Newcastle Noir there isn’t one set way of doing it and there’s a real sense of casting it up to the powers that be and seeing how it might all fit together.

How did you adapt Newcastle Noir during the pandemic?

“We had everything set up and ready to go for 2020, but in March we had to get in touch with the authors and say we needed to reschedule due to the pandemic. I had done very little online before the this. So, with very little experience we did two on-line weekends with a former student of mine supporting with the editing, which he still does. We kept going and delivered most of the 2020 festival online. The Newcastle Noir YouTube channel was born out of that, and it features the series The Doctor Will See You Now where I interview authors that didn’t manage to be part of the two weekends.

“We are looking to see if we can make this year’s one-day event online too, as I’m keen that those people who may not have been able to get out and attend the event can share the cultural experience. If we can’t manage it for 2021, we will certainly be offering a hybrid experience for 2022.”

What can people expect from this year’s Newcastle Noir?

“We’ve been bowled over by the appetite of readers and authors for the one-day event in December. We’ve had to increase the number of day-passes twice, as there was so much demand. We’ve been amazed at the generosity of the authors and how accommodating they have been. We will be observing the City Council’s Covid restrictions and guidelines.

“On the day, we will be in Newcastle City Library’s atrium on the ground floor. We have eight panels with a range of focus, and there’s the chance to listen to the authors, ask questions, and buy signed books courtesy of Forum Books and The Bound. It’s an opportunity to be part of a community that is so excited about crime fiction. If anybody is wanting to come who hasn’t been to a festival before, or is coming on their own, they’ll be sure of a warm welcome. We look forward to seeing people on 5th December for NN2021 at Newcastle City Library.”

Details about the festival and ticket availability can be found here