To celebrate Pride month, IMIX and Rainbow Migration invited five queer sanctuary seeking people, including Hamez, to the world-famous Gay's The Word bookshop in London's King's Cross, to highlight the importance of safe spaces for queer people, and to raise awareness about the plight of LGBTQI+ people who have refugee status around the word. We had the opportunity to speak to Hamez about his story. 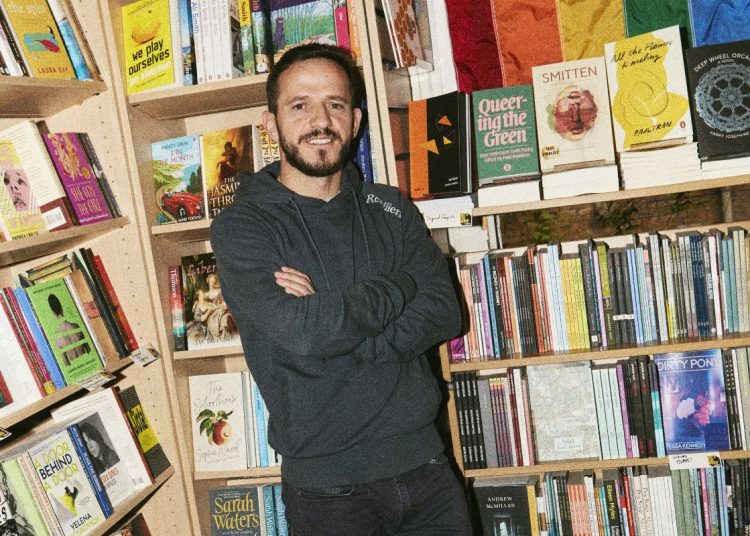 Hamez is a Newcastle resident who came to the UK from Albania in 2012 to claim asylum as a queer person seeking safety.

In recent months the threat to LGBTQI+ asylum in the UK has been more precarious than ever, with the threats of deportation and detention increasing, as the Government’s Rwanda offshoring scheme proves a dangerous risk for LGBTQI+ people seeking safety in this country.

Hamez’s story is a reminder of the progress we have left to make across the world and in this country, to make society a safe and welcoming space for queer people.

How has your Pride month been?

I’ve been attending some LGBTQI+ organisations and just getting by. It’s been good.

I came to the UK for the second time back in 2012, and I lived in London up until 2016. In 2016 I got carried away with the drinking a bit, and I was stopped by the police and asked my status, and realised I was not allowed to be in the country, so then I claimed asylum. I claimed asylum in 2016. I was in London until late 2017 and then I got transferred up to the North East in January 2018. I was kind of okay with that, moving to the North East. Yes, I did have friends in London but I was also surrounded by some Albanian friends as well. When I came here to the North East, I felt like I was literally reborn again, cause I got to be me and I’m not having to worry and always look over my shoulder. I like Newcastle. I think it’s really nice. I get to be me, I’m surrounded by people like me and I feel accepted.

How did you find the experience of claiming asylum?

Not great. It’s very stressful. You’re having to prove yourself at the same time as well. Bear in mind you’ve left your country because of circumstances where, I was caught with a guy and they tried to kill me – I had to run away and disappear. You come to a country where you feel like they’re going to accept people like me who are genuinely gay. I had been to the UK once when I was a minor, in 2002 until 2007. During then, obviously I’ve always known I was gay, even then I used to go out clubbing and I used to date guys. This was cut very short, because there was a bit of a misunderstanding in interpretation when it came to the Home Office interview. I’d made a statement by my previous solicitor, and maybe the interpreter didn’t interpret it correctly but, when I told them in the end, this is me and I can’t go back, they just thought it was an excuse to stay in the country. It was too late, and I was deported.

Then I came back in 2012, but in between 2007 and 2012 I was living with family back home. I was an adult and and being a Muslim they pressure you to get married, so I was being pressured into getting married and creating a family. Mum and Dad, they kept looking for a suitable girl for me and pressuring me. When they found the girl, I kept denying and I kept refusing and rejecting saying, ‘I don’t like her, I don’t like her.’ All of a sudden they were like, ‘We’re giving you too many choices’ – it started getting a bit serious. But at the same time I was kind of seeing this guy from my neighbourhood. One night, Mum and Dad went back home, back to my Uncle’s, and I thought they were going to be there for a whole day. But they came in earlier than I thought. I was caught, about to get into bed with a guy and Mum and Dad just walked in. From there, it just went downhill. Dad flipped, started beating me up, kicking me and Mum starting cursing and saying, ‘How dare you bring shame on our family.’ My Dad was threatening me with all sorts of stuff, he was just beating me up, he locked me up and he said, ‘I’m gunna chop your head off.’ I had no choice but to do a runner. I left my family house after that. It was do or die. I haven’t had any contact with anyone at all since.

When did you know you were gay?

Growing up as a child, I was like eleven or twelve I was always, I was attracted to boys. I’ve always found boys attractive. I used to think girls were pretty too, but there was no connection. Obviously growing up, you get told, you need to have a family, you have to do this you have to do that, you have to listen to your elders. You don’t believe any other way you just think whatever is in your mind is just, it’s wrong. Until I came to the UK for the first time in 2002, when I was 15. I saw, in London, that you can be who you want to be.

What are your dreams for the future?

I’ve done an interpreting Level 2 course, I’ve got a certificate in that and I would like to proceed further with that. Also, I would like to work in social care, or in the social services so I can translate for other people. I know some interpreters, in the past they’ve been a bit, they’re not interpreting what people have told them. I like Newcastle, I don’t know about the future but I would like to live here forever. I’m loving it. If I get the chance, but unfortunately things are not going well, so we’ll just have to wait and see. I’ve just received a refusal from the judge, cause I had a court hearing, and it got rejected, so I’m still in the process of appealing a decision from the first tribunal for my asylum. Things are not going well, I don’t feel hopeful, but I keep my fingers crossed. I’ve got to be hopeful, that’s all I can do. Stay hopeful and have a bit of faith.

Talking about writing with Gillian Jackson