Ireland is keeping a candle lit: Part 2 of European Movement conference, a talk by Noelle O’Connell

The summary of a presentation by European Movement CEO Noelle O'Connell 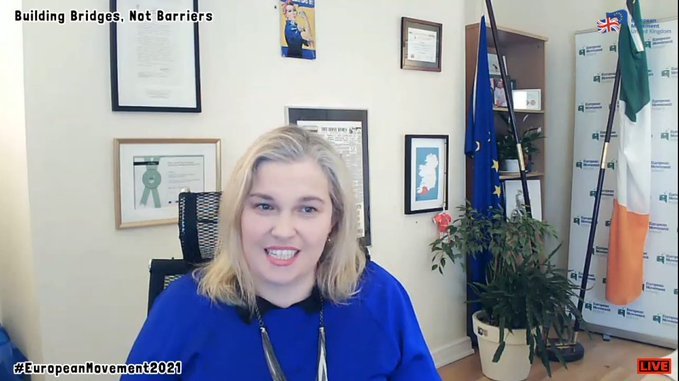 “We are your nearest neighbours and friends” were the words of keynote speaker, Noelle O’Connell, CEO of European Movement Ireland, as she also noted that the 3,000 attendees of the conference confirmed that the movement was one of the largest in Europe, and part of a wider European family that long predated membership of the EU. Indeed, Ireland and Denmark also joined the EEC in 1973 like the UK, while the origins of the EU stretch way back to the Treaty of Rome 64 years ago.

While the UK left the EU just three months ago, from Ireland’s perspective, in 2023 they’ll have been in EEC, and EU, for 50 years, and will have had nine referenda regarding Europe, sometimes having two bites of the cherry. Its membership has enabled the country to grow and diversify its exports away from sending 55% of produce to the UK in 1973, to just 10% now. Ireland’s relationship with Europe has been far more than just economic.

The EU was integral to establishing the Good Friday Agreement (along with the US, now presided by the “very Irish” Joe Biden), that has brought decades of peace. It has enabled people to identify as Irish, Northern Irish, British, not either or, and to sit together, and share their citizenship of the EU.

Central to that peace has been keeping the 300-mile border between the Republic of Ireland and Northern Ireland, that cuts through towns, roads, and even front rooms, open and hindrance free for some 30,000 people to cross each day. This is more crossing points than dot the EU’s entire eastern frontier. And in the decades since the GFA was agreed, Irish-UK relations have reached new highs.

But then came Brexit, which demonstrated “the impossibility of reversing over 40 years of negative discourse in a simple referendum.” Facts and truths were in short supply, as was support: a margin of a little over 50% of votes cast does not signal majority support, while 56% of people in NI voted Remain.

Irrespective of that, however, the referendum has opened a ‘Pandora’s box, and as Farry said earlier regarding NI, “Brexit has had significant and largely unwanted impacts”, mainly on the border. The Ireland-NI border is now the EU’s only land border with the UK, while the Protocol demands the increasingly shaky Irish Sea customs border over which a ‘new reality’ of ‘very stark trade differentials’ now exists. Covid-19 and stockpiling notwithstanding, port traffic between Welsh ports and Ireland has declined dramatically – while the threat to the GFA has risen as much.

“Brexit has raised many questions on the future of NI.” Certainly, only the British Government can call a border poll regarding a united Ireland, but in 2020 32% of those polled by European Movement Ireland said there’d be a united Ireland in 10 years, 42% disagreed, 26% didn’t know. The Sunday Times has also reported 51% supporting a border poll good in next five years.

But great turbulence may arise sooner. It was stressed again, that the TCA, drawn up to bring Brexit to a conclusion and minimise the impact on the EU’s member states, has not yet been ratified. And as McAllister said, trust between the UK and Europe has been undermined by the former’s Internal Market bill. Meanwhile, the EU is dealing with the pandemic, reworking its approach to migration, gearing up to deal with the climate emergency, and is contemplating its own future. Stalwart leader Angela Merkel will leave in months and Macron faces an election this year. For all these huge challenges, the UK remains a priority, ‘but not the sole priority.’

“I say this as a friend. You underappreciated and over estimate how much time others across the Channel spend thinking about Brexit, and they speak good English.” But the under-appreciation cuts two ways. No-one has considered what the UK did for the EU. ‘We’ve not had the chance to see what we will miss with the UK gone. Smaller states relied on the UK, the UK championed transparency, pragmatism, brought expertise.”

“The UK and EU must have a coherent cooperative working relationship on so many issues,” she said, acknowledging the wealth of hurt, and mistrust, would make such relations problematic. For that, she is optimistic as per the strong emphasis Ireland places on its bilateral relations with the UK, but ‘we’re clear in Ireland, our future is in the EU,’ she noted, with 93% of Irish expressing support for EU membership in 2020. “The EU and member states have stood shoulder-to-shoulder with Ireland, which hasn’t gone unnoticed.”

A solidarity currently countered by the UK’s ‘vaccine nationalism’. “We are in a race to save the human race, not to save face.” While the UK’s relationship with the EU has always been different to that of Ireland’s, “we share a common European home, and face common challenges with common solutions. When one succeeds, we all succeed,” affirming: “We cannot let the forces of populism and short-termism jeopardise all our gains.”

Regarding Brexit, she urged we move on. “We’ve got to be where we are, not where we were in 2016. Your hard work will reframe and reshape things.” The means to maintain strong UK-EU relations, to maintain this family in the face of formidable challenges is constructive, pro-active action, and there is still great goodwill to capitalise upon. “You’re a great country, we’re friends and allies, we always will be, as the relationship is reframed.”

She also bade us to remember: “Please know … we’ll always keep a candle lit and a light on for our UK friends.”