To live in Jarrow was a grimmer experience than to live in the Midland's town of Market Harborough. 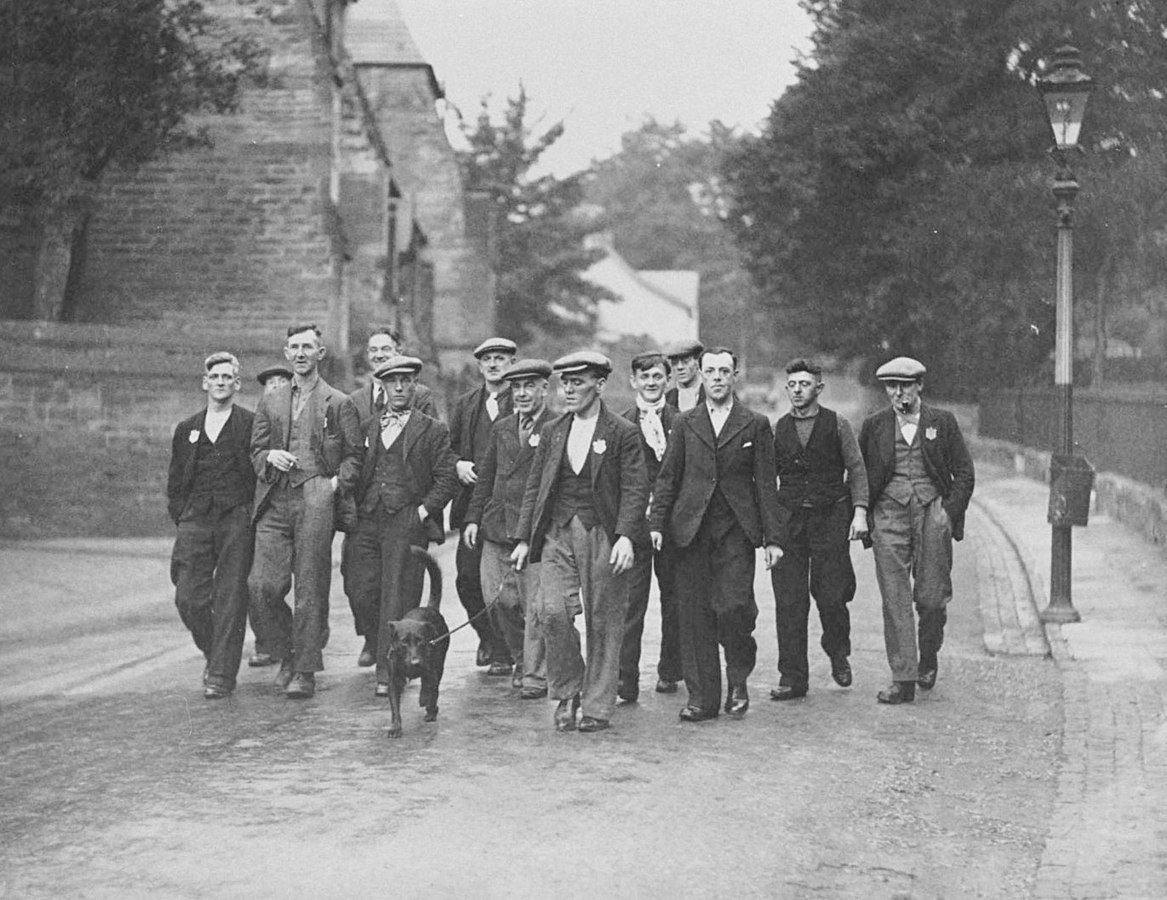 Since the end of the second world war, many people have seen the inter-war period as an age of economic failure, marked by mass unemployment, hunger marches, including the Jarrow March of 1936 and lengthening dole queues. For the historian Claud Cockburn, this was the ‘devils decade’.

However, this popular view has been challenged by the author and broadcaster Stuart Maconie in his book, ‘The Long Road to Jarrow’. He points out that, although there was great hardship, especially in the north of England, South Wales and industrial Scotland in the 1930s, it was unevenly spread out.

The hardships were very real, particularly for those who lived in the depressed areas of Tyneside, Teeside and County Durham.  For instance, between 1854 and 1913, the output of British coal had grown from 65 to 287m tons. By 1934, it had fallen. For the historian Eric Hobsbawn, in human terms, the ruin of the traditional industries such as shipbuilding and mining was the ruin of hundreds of thousands of men through mass unemployment.

To live in Jarrow was a grimmer experience than to live in the Midland’s town of Market Harborough. In 1936, the Tyneside town of Jarrow resembled a ghost town, with over 80% of the town’s men jobless.

The Durham town of Ferryhill experienced 25% worklessness. The consequences were devastating – shops, pubs and other businesses were forced to close. Families fell into debt. Diets suffered and health both physical and mental deteriorated. The dole was meagre having been cut by 10% in 1931. The hated means-test was often applied in a harsh and heartless manner by some public officials steeped in the old ways of the Poor law and workhouse.

Today unemployment across the UK is rising sharply. A recent report by the Learning and Work Institute points out ”the sharpest rises are taking unemployment to historic highs”. The report states: ”Unemployment could rise above 15% in the final quarter of 2020, perhaps reaching levels last seen in 1936. This would mean in excess of over four million people out of work”.

According to the Institute of Fiscal Studies COVID-19 is having a disproportionate effect on the job prospects of groups that were more disadvantaged even before the crisis – young people, women, older workers and the low-paid. In the north-East of England 17% are NEET (Not in Education, Employment or Training), the highest in mainland Britain and this is likely to treble by 2021. In Newcastle-Upon-Tyne 8,000 adults are claiming Job-seekers allowance or universal credit, a figure that’s expected to increase to 24,000 by Spring 2021 unless radical action is taken, warns the LGA (Local Government Association).

While central government has unveiled a £2b ‘Kickstart’, job creation programme, aimed at jobless 16 to 24-yer olds, the Learning and Work Institute is calling on the Government to bring forward ”large scale investment and incentives to create jobs with shovel-ready and jobs-rich schemes.”

According to James Bloodworth in his undercover study, ‘Hired‘, millions more experience the insecurity and low wages of the ‘gig economy’. There’s been a dramatic rise in precarious so-called ‘self-employment’ and zero-hours contracts especially in the social care sector of the economy. The Trussell Trust, through its volunteer led outlets, gave out almost two million emergency food parcels in 2019. Child poverty and mental ill-health have increased with 16,700 youngsters at risk of falling through the safety net in the school and care system.

As Maconie notes:  ”The Thirties in some ways start to look very much like the Britain today, once you’ve wiped away the soot and coal dust”. The UK economy shrank by a staggering 20 per cent between April to June 2020!

Social class, for Maconie, is alive and well. It’s the principal division of British society as he reflects upon the north-south divide through his contemporary journey from the post-industrial towns of Barnsley and Spennymoor to the southern market towns of Bedford and St. Albans. The former industrial town of Ferryhill today is a ”a mining town with no pit”, he writes.

Yet as historians ranging from John Stevenson to Martin Pugh argue Birmingham, although hard-hit, escaped the ravages of the inter-war recession, while the leafy suburban towns of the home counties remained untouched, with full employment. New council housing was being built for the ‘respectable working-class” in some parts of the country. With interest rates low, new mock owner-occupied Tudor semi- detached homes were being built on the fringes of London for professionals in the private and public sector.

Nor did the era produce a potential revolutionary situation or extremism as predicted by some contemporaries at the time. Although membership of the far-left Communist Party of Great Britain grew from 2,500 in 1930 to 17,500 by 1939, it made very few advances. Likewise, Oswald Mosley’s far-right Fascist blackshirts during the period made little impact on the nation, even though the party had 30,000 members by 1935.

The 1930s were, in several respects, a period of growth and socio-economic expansion.  The well-established light industries of the Midlands, although they had always met the demands of the domestic consumer, found themselves faced with a rapidly expanding mass market. Inexpensive consumer durables such a vacuum cleaners, radios and electric irons flooded the market and were bought in vast quantities by 1939.

Department stores like Woolworths grew and expanded rapidly, selling a wide range of cosmetics and women’s magazines. Today the retail and hospitality industries, employing hundreds of thousands, are on the brink of partial collapse due to COVID-19 pandemic. Even the long-established retailer Marks and Spencer have announced 7,000 redundancies!

As the 1930s witnessed marked shifts in the economy in both ‘Middle England’ and the south-east of the country, leisure became transformed. In 1920, there had been about half a million motor vehicles of all kinds. by 1932 there were three times as many. By 1939, that figure had doubled. Of the three million vehicles on the roads, two million were private cars. In Oxford, traffic jams had become a familiar bank holiday event. In 1931, only 1.5m people were entitled to a paid holiday. By 1938, this figure had risen to 11 million.

Caravans, Butlin’s holiday camps and cinemas were becoming a familiar sight. The number of visits to ‘picture houses’ rose from 36,000 in 1924 to eight million by 1935 with cinemas like the Odeon packed out every weekend.

Throughout the period, the cost of living fell by one third faster than wage rises. Those in secure employment like ‘Blackcoated workers’ (clerks) and skilled artisans, who formed the majority, enjoyed a rise of 17% in real incomes from 1924 to1935. The author JB Priestly in ‘English Journey’, published in 1934, was not slow in observing the paradox that prevailed: mass unemployment and abject poverty for one section of the working-class in the north and a rising standard of living for another in the south. He wrote: ”This is the England of arterial and by-pass roads, of filing stations and factories that look like exhibition buildings, of giant cinemas and dance halls and cafes, bungalows with tiny garages, cocktail bars, motor coaches, wireless, hiking, factory girls looking like actresses, greyhound racing, swimming pools and everything given away from cigarette coupons”.

Maconie argues that, 80 -years on, we’re going back to 1930s depression, deepening inequality in material condition and the growth of radical-right populism. It can’t be denied that we’re seeing a widening gulf between the north and south of England. Just as disturbing, we appear to be witnessing a big gap opening up between the cosmopolitan core cities of Manchester and Newcastle and nearby urban post-industrial and coastal towns where’s  there much discussion about the ‘white working-class’ becoming marginalised, angry, left out and left-behind.

It’s imperative that we make our post COVID-19 country, a ‘one-nation society’ again based on full-employment, meaningful job opportunities in the ‘green economy’ and social inclusion. And a new deal too for those  one third of youngsters who didn’t get a level 4 in GCSE in summer But we also need to strive for a ‘one region society’ too,  if we’re serious about re-creating a more equitable and fairer community which benefits the many and not the few.