Is Poland already an authoritarian state?

Poles, especially young ones and those who have made their home in the UK, are now saying to their government, enough is enough! 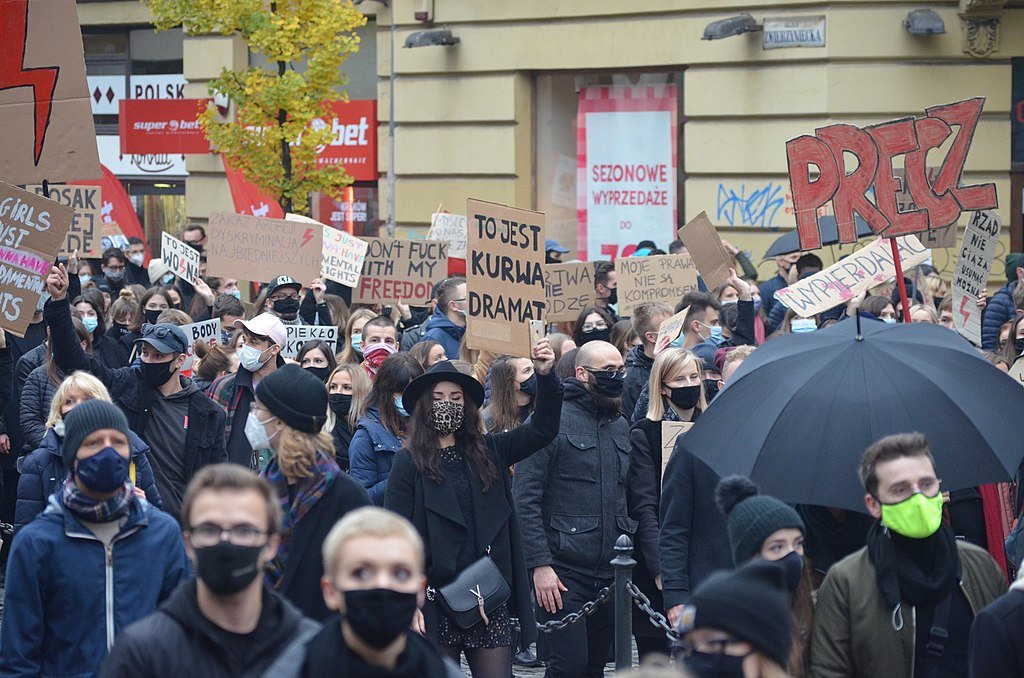 Why did over 100 Polish men and women want to protest in Sunderland just before the second lockdown?

On 4 December 2020, a large group of Poles living in the North East of England were planning to protest against the Polish government- and in support of women’s reproductive rights. Due to the second lockdown being announced days before the date of the protest, it had to be cancelled. Since 2015, Poland has been governed by the Law and Justice party (PiS- Prawo i Sprawiedliwosc)- a name that is less and less often reflected by reality.

At heart of the problem lies PiS’s somewhat symbiotic relationship with the Roman Catholic Church. Catholicism has, traditionally, played an important part in Poland; during the 18th and 19th partition of Poland, the Nazi occupation and during the communist era, the church was seen as the only major force able to counter the occupiers and those working for them. When people in the UK ask why Poland is not Orthodox, like Russia or Belarus, or predominantly protestant, like Prussia used to be, the answer to this question could well be: “it was precisely because those rival powers were not catholic, Poland remained a catholic country.”

As the church was so influential in bringing about the end to communist rule in Poland, once communism ended, it was able to claim a moral hegemony over the country, its influence growing to an extent, arguably, not seen since the beginning of the modern era. In politics, this influence meant, amongst other things, the establishment of the so-called abortion compromise, which only permitted abortion in very limited circumstances, including if the pregnancy is a result of a prohibited act (e.g. rape), if the pregnancy poses threat to life or health of the mother, or if there was a severe and irreversible damage to the foetus or an incurable life-threatening disease. Up until the ruling, the right to abortion was regulated by the 1993 act of parliament (Family planning, foetal protection and right to abortion, 7 January 1993). This act was to be a compromise, placating both sides of the abortion debate.

Following a court ruling made by the (now PiS- controlled and arguably- illegal; unconstitutional) Constitutional Tribunal, this last reason was declared to be illegal. What followed were the greatest protests in Poland since the fall of communism- where 0.5 million predominantly young people and women took to the streets, PiS appear to have stopped the non-tribunal’s judgement from being published, and thus, from being enacted. While the campaigners celebrated this partial climb down, the Polish constitution explicitly states that Constitutional Tribunal rulings must be published without a delay- yet, over a month after the ruling, it has still not been published.

To put it in context, all of this is taking place in the middle of a global pandemic, when people across the world, including in Poland, are losing their jobs, their livelihoods, their close ones- or dying themselves.

Towards the end of October, Andrzej Duda, the president of Poland, in no small part motivated by the continuous wave of protests, suggested a ‘compromise’ solution, one which would make abortion legal where irreversible, lethal foetal defects are discovered during the course of the pregnancy. At the same time, the president declared he did not believe the effects of Down’s syndrome (also known as Trisomy 21) would meet the criteria set in his proposal; this is despite the fact that in 20% of Trisomy cases, the foetus dies before labour has even commenced. Currently, in many cases, serious developmental defects can only be discovered after the 20th week of pregnancy and later- and in Poland, the woman has no choice- she has to give birth. This in turn often leads to her having to leave employment and provide 24/7 care for the child. The psychological and physical strain of having to care for a child with a serious developmental problem is great. Often, the relationship between the parents breaks down as a result. In Poland, support for them, including financial support, advice and help (e.g. respite centres) is very limited, and the burden of providing support often falls on the family’s shoulders, often the women.

This is why for us, Poles living in the UK, it is important to support our friends, daughters, and – indeed, sons, fathers and brothers in their fight for equality. We felt Poland was a free country and a democracy; it is now becoming increasingly authoritarian. We do not accept that a group of out of touch, mostly male politicians should make our decisions for us. We have our own opinions and values, and based on them, we will make our own decisions. Above all, women have to be empowered to make their own decisions, as it is them who would have to live with their impact for the rest of their lives. Hence, we must and will fight for our personal freedoms and the freedom of our country.

Poles, especially young ones are now saying enough is enough! That also includes those who have made the UK their home. Still recovering from the fallout of Brexit, we see similar* forces to those that took Britain to the edge destroying the country of our birth. We have had enough of misogyny, patriarchy, hypocrisy, intolerance and hatred our (second) government is cultivating in Poland. Many of us now refer to Poland as an authoritarian state. Is Poland authoritarian?

Well, so far, the PiS government and the PiS- ruled institutions have:

Now, they are attempting an even greater control over the bodies of Polish women.

An authoritarian government in underpinned by “any political system that concentrates power in the hands of a leader or a small elite that is not constitutionally responsible to the body of the people. Authoritarian leaders often exercise power arbitrarily and without regard to existing bodies of law”. (Encyclopaedia Britannica, 2020)

You may answer the question whether Poland is already an authoritarian state yourself. We believe that it certainly is gravitating towards something between Belarus and Franco’s Spain. Meanwhile, several people have already claimed asylum in Norway, claiming persecution by authorities in Poland.

We ask you for your solidarity, as we stand in solidarity with those who stand for social justice, equality – and truth in the UK.