Once or twice in a generation an era-defining TV series comes along, and Channel 4’s It's a Sin is a contender for just that. 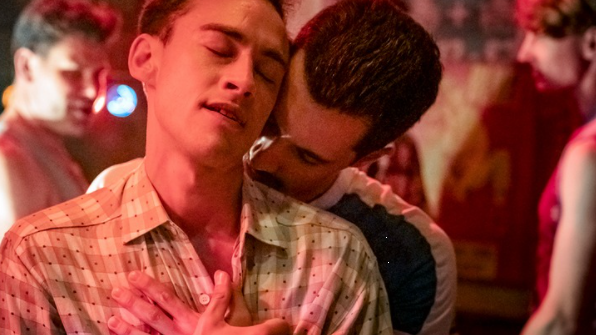 Once or twice in a generation an era-defining TV series comes along, and Channel 4’s It’s a Sin is a contender for just that. The five-part drama. set in London between 1981 and 1991 to an iconic -pumping soundtrack of Lennox, Blondie, Queen, Erasure, Almond and of course the title track – moves us along with a group of gay friends through their wild parties and ultimate journey of self-discovery while they explore their sexuality and emerging careers. The first two episodes are a breathtaking pop-video of ominous fun soon to be set against the emerging AIDS pandemic – John Hurt’s voice of doom booms out more than once. Episode 3 soon progresses from the fun frolics of youth to something much darker, and to an ultimately tragic tale of ‘lost youths’.

BBC and ITV sadly declined to develop its hard-hitting subject matter, but in the brave hands of Russell T. Davies (Queer as Folk, Doctor Who) and Channel 4 – it navigates the 1980s with compassion and humour – we even get a scene with the Daleks thrown in for good measure.

What becomes painfully clear is just how little we all knew – reminding me a little of last March and the eventual Lockdown. The consuming fear of a new virus is all too real, although the fact it only seemed to ‘wipes out the gays’ who were consequently a lot less informed and protected by the State is made glaringly obvious.

As a group in society that had only too recently been ‘legalised’ and allowed the freedoms of abandoned youth, they were soon overtaken by shame, fear, and judgement – the virus was cruelly seen as a punishment. In turn we witness these wonderfully humane characters being ignored, excluded and blamed – with young men left to ‘die of shame’ in hospital isolation units, often alone. Mix in the horrors of Article 28 and clashes with the police and you have compelling drama with a powerful mix of discomfort and nostalgia.

Occasionally Davies’ women characters are polarised into angelic carers or controlling witches, with some of the female reactions, and blaming of each other a little frustrating, but this is still, undoubtedly stellar, must-watch TV for pandemic times. You will roar with laughter and you will weep – have tissues at the ready.

Growing up in Newcastle in the 1980s I was all too aware of the prejudices, my best mate was gay and though I didn’t understand its implications fully  at the time,  that keen sense of shame and his fears of rejection he felt growing up are fully explored. Interesting fact: Neil Tennant went to the same catholic boys’ school – the same school that inspired the song It’s a Sin.  My friend only came out in the mid-1990s when it was becoming more acceptable, and after some wild times he is now happily married – it is society that has finally grown-up.

This is not moralising TV  – it’s a rip-roaring ride through an era, which I happily binge-watched, but to focus solely on the nostalgia, music and clothing (which are all mint) takes away from Davies’ intense social and personal drama. However, it could make us look back upon our lives, not with a sense of shame or blame, but with renewed empathy.