So here I am, seven months later, still stuck in the house, still seeing just my next door neighbour and delivery drivers face to face but otherwise communicating only by phone, text or email. 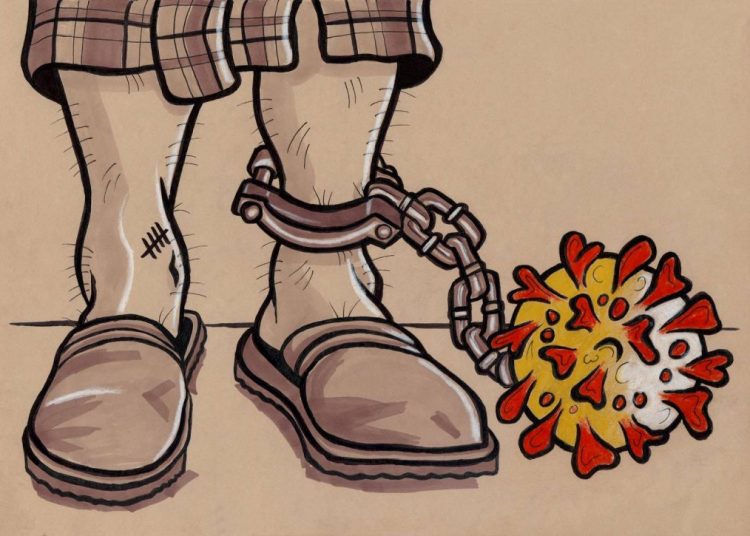 I am writing this on my 215th day of shielding as it is called, self-isolation as it was called when it started, and absolutely-fed-up-to-the-back-teeth-ness as I call it now. And yet… I have to be honest, I’m scared of going out. I’m 77, overweight, have emphysema, chronic bronchitis and high blood pressure, so I am the perfect target for that nasty little virus. If I expose myself (Oo, missus!) to it, the little bugger will grab me as quickly as you can say Jack Ro…

I’m also beginning to think that I am suffering from some bizarre form of Stockholm Syndrome. I put my shoes on this morning (first time I’ve worn shoes or socks for months) and went out to start the car. Guess what? The battery is flat, not the teeniest, weeniest, tiniest suggestion of the smallest scintilla of a little sparklet, and, you know, I feel almost relieved at finding another reason not to go out.

Now that’s not me. Not really. Last year I reviewed 57 shows for the British Theatre Guide as well as seeing other shows which I didn’t review for various reasons (they were just previews, rehearsed readings or private showings of work-in-progress, and so on) and this year I reviewed 12 between 15 January and 5 March. In fact, on 5 March – it was a Thursday as I remember so well – I got home from Live Theatre just after 11pm, parked the car outside, had a cup of tea and went to bed. I woke up the next morning feeling dreadful. No, not the virus, just a really lousy cold which dragged on for almost two weeks and, just as I was feeling better, I received the NHS letter telling me to self-isolate for at least 12 weeks.

So here I am, seven months later, still stuck in the house, still seeing just my next door neighbour and delivery drivers face to face but otherwise communicating only by phone, text or email.

And the car is still exactly where I parked it at 11pm on 5 March.

It could be worse, though.  I’m not restricted to watching TV; I can read; I can watch theatre online, pretty poor substitute for the real thing though it is; I can write theatre news stories for the British Theatre Guide, although most of those seem to be about cancellations or closures, and I can write pieces like this for North East Bylines.

(There was a time when I would have joked, “Well, it keeps me off the streets,” but now it’s become a substitute for being on the streets – or anywhere else for that matter – and that’s not a subject for joking.)

And I can get on with writing plays – but have discarded every single one after five or six (or fewer) pages. So that’s not particularly satisfying…

No! It’s not! It’s bloody frustrating, that’s what it is, and I’m sick of it. I know I’m not as badly off as some – probably many – others, and I should be grateful, thankful for small mercies and all the other clichés that fit, but I’m not.

Other writers I know have taken up new hobbies but whenever I allow that idea to enter my head, the words “old dogs” and “new tricks” flash in neon brilliance in my brain. Others have taken up exercise. “Couch to 5k” forsooth, while getting off said couch is enough to knacker me!

I do get some exercise, though. I go for long walks: from the bathroom (at the back of the house), through the kitchen and the living room, into the passage, to the front door, and all the way back again, and I do that for as many times as I can until my legs and back ache and my breath comes in short pants (another “oo missus” moment, perhaps?).

Occasionally, too, I get out into the fresh air; I take the bins from the back yard into the back lane and I bring them back in the next day. Oh bliss, oh rapture!

Isn’t this pathetic? Turning something which is driving me round the twist into a joke! I’ll be invoking the spirit of the Blitz next. Excuse me for a moment while I wave my little flag and sing “There’ll be bluebirds over…”

Oh dear, oh dear, oh dear! I remember in Julius Caesar, Caesar takes Mark Antony to one side and says of Cassius, “He thinks too much. Such men are dangerous.”

True that! And I think I’m probably thinking too much and being a danger to myself.

And there never were bluebirds over the White Cliffs of Dover because they are not native English birds and the song was written by an American anyway.

Is the argument black and white – or grey?