Paty was brutally murdered outside the Bois-d'Aulne school in Conflans-Sainte-Honorine after an online hate campaign. 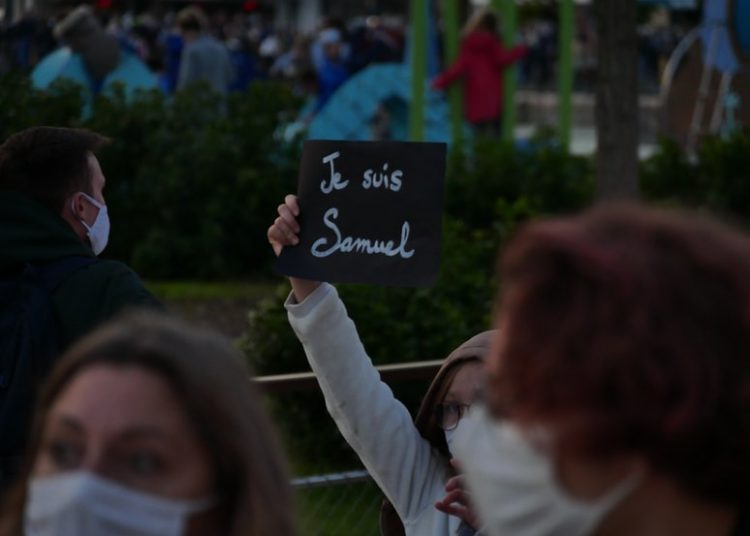 Photo by Rafael Garcin on Unsplash

The horrific killing of history teacher Samuel Paty, 47, in Paris on October 16th raises issues that keep coming back to haunt us across Europe and the wider world. Paty was doing his job. He was a teacher at a suburban school in the north of Paris where pupils described him as “very accommodating, a good listener.”

“He was really into his job. He really wanted to teach us things… Sometimes we had debates, we talked,” added another.

Paty was brutally murdered outside the Bois-d’Aulne school in Conflans-Sainte-Honorine after an online hate campaign orchestrated by extremists in the Muslim community who disapproved of his civics class on freedom of speech whereby he used caricatures of the Prophet Muhammad from the satirical Charlie Hebdo magazine. It will be remembered that these cartoons provoked a murderous attack against publishers in both Denmark and Paris in 2015.

Paty’s attacker, Abdullah Anzorov, an 18 year old Chechen refugee, was shot dead by police. It seems Anzorov had paid two teenage students around €300 to identify Mr Paty. The killer had told the students he wanted to “film the teacher and make him apologise for the cartoon of the Prophet… to humiliate him, to hit him”. It seems that the father of one of Paty’s pupils had issued a “fatwa” against the teacher.

This is a tragedy that keeps on giving. On Saturday night two Muslim women were repeatedly stabbed as they walked near the Eiffel Tower. Their attackers allegedly screamed ‘Dirty Arab!’ and ‘Go home to your own country’, an oft-repeated phrase heard here in the UK, whipped up by the right-wing press in the lead-up to and in the ongoing aftermath of the referendum campaign.

Neither is the repugnant ‘Go Home’ mantra reserved solely for Muslim migrant populations. It has been used to target non-Muslim white European migrants who dared speak in their mother tongue of French, Spanish or other European language whilst on the tube, in the park and other public spaces – much to Nigel Farage’s annoyance. Polish and Romanian workers and their families have all too frequently been on the receiving end of xenophobia with racist messages daubed on walls and threatening notes pushed through doors. Sometimes these messages of hate have been accompanied by disgusting acts such as excrement posted through letterboxes, and incidents of arson and violent attacks.

But, let’s be clear – the ‘Go Home’ message belongs to the Conservative government. It was the thrust of a Home Office campaign instituted as part of Theresa May’s ‘hostile environment’ which saw the command emblazoned across vans parked in prominent places, presumably to scare those whose status was as yet undecided. State-sponsored xenophobia and ‘othering’ has historical precedence and it doesn’t end well.

Meanwhile, France is in national mourning again. Thousands of people filled the Place de la Republique on Sunday to demonstrate their solidarity with the teaching profession, and at a memorial ceremony on Wednesday Macron posthumously awarded Samuel Paty with the Légion d’Honneur.

Freedom of speech is cherished by the French. Charlie Hebdo had recently republished the controversial cartoons ahead of the murder trial in September. In its editorial, the magazine said that it has often been asked to carry on printing caricatures of the prophet since the 2015 killings.

“We have always refused to do so, not because it is prohibited – the law allows us to do so – but because there was a need for a good reason to do it, a reason which has meaning and which brings something to the debate… To reproduce these cartoons in the week the trial over the January 2015 terrorist attacks opens seemed essential to us.”

So how can teachers safely continue to debate and promote important concepts and values? Who else can help in this task? How can we reach out to diverse communities and replace fear of the ‘other’ with neighbourliness? How can we ensure refugees and migrants like Abdullakh Anzorovm do not fall prey to radicalisation and violent extremism?

The EU has some answers and we Brits were actively contributing to a common effort prior to Brexit. In March 2015 the Education Ministers of all 28 EU Member States came together in the French capital and signed the ‘Paris Declaration’ recognising the key role that education plays in shaping young minds and contributing to a peaceful society. Meanwhile in the European Parliament, the Culture and Education Committee won support for a report on ‘The Role of Intercultural Dialogue, Cultural Diversity and Education for Promoting Fundamental Values’ and I was privileged to be the rapporteur. My report was not rocket science. It delineated existing best practice carried out in many Member States and was rooted in my own experience as a participatory arts practitioner working with marginalised communities for years.

In my report I chose not to promote the wholesale integration of migrant communities whereby many feel they are forced to surrender their cultural identity, but rather I promoted dialogue, people to people contact, a celebration of diversity, and the means to discover our common humanity through shared activities. My proposed interlocutors were not just teachers but youth workers, community leaders, artists, librarians, museum educators, trade unionists, businesses and faith leaders. We need an ‘all of society’ approach and a reckoning with our difficult past.

By the time my report came to the plenary session in Strasbourg for a final vote in the European Parliament it was January 2016 and the Bataclan massacre had occurred, further entrenching poisonous anti-migrant and anti-EU sentiment. Meanwhile, David Cameron was under pressure from his hard-right ERG faction to fulfil his election promise of an In/Out referendum on continued membership of the bloc. I vigorously defended my report in the debate and won broad support for my recommendations, including from Orban’s appointee, the Hungarian Commissioner. But when the time came to vote I watched Conservative MEPs in the chamber vote against my report, presumably on instructions from the government. I found this hugely at odds with Nicky Morgan’s signing of the Paris Declaration the previous March in her capacity as Conservative Education Minister.

My report builds on that very same Paris Declaration and contains within it the framework for better living together in the 21st century society.

It is now being implemented by progressive governments across the EU and it serves as a reference point for improvements to existing EU schemes and for new programmes and initiatives that are being created to benefit future generations of young Europeans. Yet our Conservative government will not even sign up to Erasmus+ (the acknowledged flagship programme for youth interaction and engagement) in the current negotiations.

The young people, their families and the teaching community of Conflans-Sainte-Honorine need our sympathy in this dark and difficult moment. But they also need tools to address the divisions and hatred that drive violent extremism.

As well as my report with all its practical recommendations, the EU is funding the IMPACT interdisciplinary research project which aims to help practitioners understand what works in tackling violent radicalisation. An evaluation toolkit is being developed for use in both the public and voluntary sector and it couldn’t come soon enough.

For people like Samuel Paty’s family there is a long and difficult road ahead. How not to hate those who hurt you and your loved ones? In this respect I want to pay tribute to people like Figen Murray, the mother of Martyn Hett who was killed in the Manchester Arena attack, and Nabila Mazouz whose son enlisted to fight with ISIS. Figen and Nabila are key figures in the EU RAN initiative to combat radicalisation which recognises that there are victims on all sides including the families of the perpetrators.

As Figen says, “I tell our story wherever I can make a difference… Working together, putting aside differences and sharing good practices, that’s what it’s all about.”

The case for a united North East England