Katie Maughan reviews Julie and the Phantoms, a unique series on Netflix. There are hopes and plans for a season 2 as well. 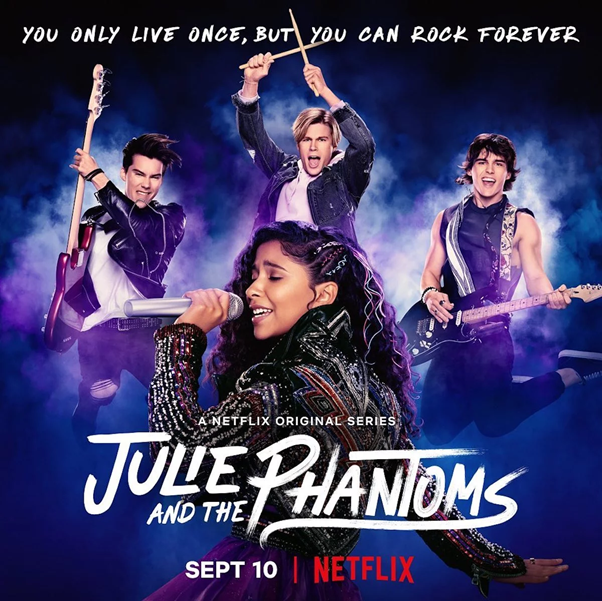 Julie and the Phantoms screenshot

Julie and The Phantoms is a unique musical Netflix series, directed by Kenny Ortega who has worked on films such as High School Musical and Dirty Dancing. The series revolves around teenager. Julie, who is grieving the loss of her mother.

Julie(Madison Reyes)  had given up on music, until she met Luke (Charlie Gillespie), Reggie (Jeremy Shada) and Alex (Owen Joyner). The trio make up Sunset Curve, the band they had started before dying in an accident the night before a show. The three ghosts discover that they can only be heard by the living whilst performing, and decide to invite Julie to join the band.

A unique take on ghosts in Julie and the Phantoms

One of the most fun aspects of the story is watching the members of Sunset Curve learn about what’s changed in society, including technology, pop culture and even societies’ attitudes to the LGBTQ+ community. Alex is the most interesting character in this regard, since he was originally kicked out of his home in the nineties for coming out as gay. He’s the most sensitive character of the bunch, so it’s really wholesome to see him coming to terms with how much more open society is now.

Casual LGBTQ+ representation is extremely important, especially in children’s television. A way normalise being queer is to depict realistic gay identities in media, especially since this is where children learn a lot of their values.

Having a character like Alex, who doesn’t have a huge coming-out plotline is a great step for representation in children’s media. His sexuality is referenced very casually by the other characters, and none of his close male friends are uncomfortable with his sexuality. When one of the villains in the show (played by Cheyenne Jackson) tries to set him up with a girl in a bar, he admits that he’s not really into girls, and the villain just apologises and tries to set him up with a male instead. Showing kids that even a villain doesn’t judge the lead character for his sexuality is extremely progressive. We even see Alex gain a love interest throughout the show, which is treated exactly the same as the heterosexual pairings in the show.

Unlike a lot of teen dramas, Julie and The Phantoms stars a Puerto Rican-American actress. Though this is gradually changing, it’s still not as common to see non-white female leads in children’s television. Madison Reyes (Julie) herself is very proud of her Puerto Rican heritage and loves to share her love of her culture online. It’s very important for children to see themselves represented on TV, so for young Puerto Rican kids getting to see the star of Julie and The Phantoms sharing her love of her culture is amazing.

On top of the unique plot, the show features some great music in a variety of genres. The show features rock music, pop and musical theatre, all performed by the cast. The cast members themselves even contributed to the songwriting process. Madison Reyes (Julie)  and Charlie Gillespie (Luke) actually co-wrote the song Perfect Harmony during preparations for the show after they were offered the opportunity to write a song, which ended up making it into the show.

Fans are still waiting for a confirmation of Season 2 from Netflix, but the director and cast have been hinting that there is still more to come for the show. Stream the first season of Julie and The Phantoms on Netflix now.

You may also enjoy Superstore.

Over a third of Durham children live in poverty