Just who are “The People” and who represents them?

We are often told what the people do, think or say. Gareth Kearns examines just who are "The People" and does it count you. 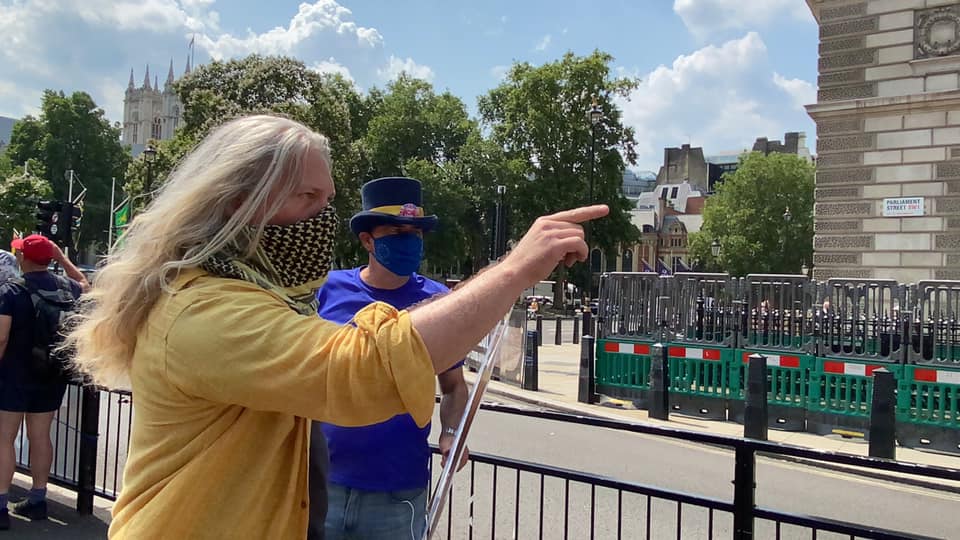 Last Wednesday, 21 July 2021, as I Joined with the SODEM team at the regular PMQs protest outside parliament, I was told in unequivocal terms by a Covid-denier that I didn’t represent “The People”. Just what I am to make of that?

We do not claim authority by standing for the remain / rejoin ideas, we merely claim our right, under a democracy, to protest in favour of that perspective, our right to articulate it in public so that we may remind the public of it and, it is hoped, nudge anyone exposed to our perspective into considering its merits.

“Ask those that are giving it” [“it” being the vaccine]. Have there been any deaths? Ask them what is in it. Ask them. Get their names. You email them to me. themedicalrevolutionaries@protonmail.com. With a group of lawyers, we are collating all that. At the Nuremburg trials, the doctors and nurses stood trial. And they hung.”

This was followed by cheers from the crowd.

“If you are a doctor, or a nurse, now is the time to get off that bus. Get off it. And stand with us, The People. All around the world, they are rising.”

The Trafalgar Square Rallies (as history may come to remember them), well provisioned with PA systems and big screens are a curious place to invoke Nuremburg.

An earlier Trafalgar Square Rally saw the unfurling of the flag of the British Union of Fascists. The film archive of Nuremberg records the ranks of disciplined, uniformed Nazis, in perfect order, cheering The Fuhrer’s invocation of “Ein Volk” when he left them a prompting gap in his fevered ranting. Nothing could be more different than a bunch of Brits, in tee shirts, waving flags in support of Donald Trump, milling about in clumps and, when the speaker invokes “the People”, responding with cheers in the gaps between the fevered ranting.

And there is a subset of “The People” that seem to be invoked with increasing vigour at the moment. That is, “The British People”. They lend their authority to the pronouncements of Boris Johnson et al. Priti Patel never stops banging on about them. Loves them, she does.

So very obliging of “The People” to lend authority to the pronouncements of these various parties. But here’s the thing: I’m British. I am also a person. I am one of “The People”, surely? Apparently not.

Back to the person I mentioned at the beginning. In his own words:

“You do not represent The People. You represent two, maybe three, brainwashed people that are still living in this bonkers narrative”.

I remind you, we make no claim to represent “The People”. It wouldn’t occur to us. We represent, in so far as we represent anything, a dissenting perspective. We are entitled to protest that perspective, even as the government tries to remove that right through the Policing Bill. How many people out there find this perspective of ours amenable? It is difficult to say. Very difficult. However, I can make reference to a few facts.

It’s all about numbers

52% of those who voted in the Brexit referendum, voted leave. So, 48% voted remain.

And the electorate isn’t everyone. In that case only 27% of the population voted for Brexit.

But so much for the Brexit perspective. How about Covid-19? Do the anti-Covid/anti-vaxxers represent “The People”?

The chap of whom I have already made mention would later assault me, ripping off my mask. Very definitely a hands on anti-masker. And, after all, the government did withdraw the requirement for masks, at least for a moment before back-peddling somewhat (again).

Interestingly, according to a survey by the Office of National Statistics about two thirds of those surveyed said they would continue to wear masks in shops and on public transport and the like after the rules were relaxed. However, our hysterical street-assaulter still claimed he represented “The People”. As did our struck-off nurse as she advocated lynching medics.

Surely this survey indicates that they might, at best, represent a third of “The People”?

And then, the fact is that this moment as I write, 88% of the British population have had at least one of the jabs. So that leaves 12% who haven’t. Is that 12% “The People”?

The Tory party was, in 2019, voted in by 44% of those who voted. Again, this is not all those entitled to vote, just those who exercised that entitlement. The turnout was around 67%. That leaves 56% of those who voted who didn’t support the Tory party. That’ll be over 60% once those who declined to vote at all are accounted for. Is this 60%+ not to be regarded as “The People”?

How do you get to be “The People”?

More importantly, why do you get to be “The People”?

I find that “The People” are positively profligate in their endorsements. The course of my week’s adventures suggest that “The People” to whom I refer are Tory voting Brexiters who believe the pandemic is nonsense, and so must be that middle bit in a Venn diagram made up of these subsections of the population which amounts to around 35%, 27% or 12%, of the population respectively.

Also, “The People” don’t tend to publish. They are referred to all of the time, they are appealed to these days as an authority for everything from hanging medical staff to assaulting people in the streets. “The People” don’t have any articles, don’t appear on TV interviews, they haven’t a website. And yet they are quoted willy-nilly. Have been for a good 80 years.