Life seen through a retort tube: MIMA’s exhibition on Teesside, and its chemicals underworld 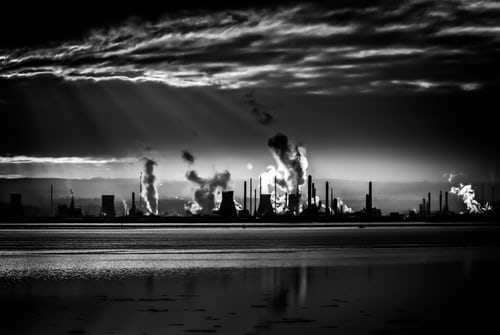 A ‘go see’ for those able to make it is a coming exhibition at MIMA in Middlesbrough. It’s marketed under the less than catchy title of “Art/Chemical City” and relates to Teesside and its long links with chemical manufacturing.  MIMA says in their blurb: “Opening with a focus on the development of plastics in the area, the exhibition expands into broader social, economic, material and ecological themes. Selected design products and historical archives chart relationships between early experiments with synthetic fibres and dyes and contemporary innovations in a more sustainable fashion. Painting, sculpture and film by artists trace societal and material impacts of twentieth-century manufacturing on people and places.”

“For the first time, we are combining contemporary mainstream fashion products with newly commissioned artworks and historic archival materials.”

The setting for ‘A Brave New World’

Through displays of company magazines, press photographs, archival film footage, material samples, products and personal memorabilia, the exhibition’s first gallery animates life within ICI on Teesside in the Corporation’s heyday; the November 1945 announcement of the new Wilton petrochemical complex was hailed by the local Gazette as an “A-Bomb Factory for the Tees.” It encompasses themes of memory, relationships to place, and ecological recovery.  The second gallery features newly-commissioned significant artworks putting what has gone before in visual context.  This is a well-travelled path. One of the first post WW1 generation of ICI Billingham managers (as you might guess, he didn’t last long) was Aldous Huxley. He drew on his memories of the plant; powerful yet indescribable to an outsider, as the backdrop setting for the London of “Brave New World”.

A hundred years of innovation on Teesside

All this downplaying is a shame really.  Chemicals, firstly in the shape of Imperial Chemical Industries (ICI) were a major employer in the area between the 1920s and 2011’s. ICI was followed on Teesside by most of the global big names. They were attracted by skilled labour produced for ICI and by the long late 1960’s boom fuelled by the advent of North Sea oil and gas feedstocks. Its presence has shaped Teesside’s built environment, local ecology and sense of place. Incredible innovations led to the development of important materials and products such as Perspex, refrigerants, paints, synthetic dyes, polyester and nylon.

All this is important. Oil and the chemical industry lie low in the nation’s collective consciousness, regarding it if at all, as having some connection with power generation, and thus global warming. People are right here, even if they hit the wrong target. Large scale power generation on Teesside is now purely zero-carbon; either Nuclear as at Hartlepool, or by renewable energy best seen in the Tees Bay wind power farm from Redcar seafront.  But the strongest link between oil and gas extraction is not with the power utilities – it is with the tight group of global chemical players headquartered in the US, Japan, the Gulf and mainland EU Europe.

Exeter University’s Professor Adam Hanieh is one of a tiny group of leftist academics who view Saudi Arabia and the Gulf States more in terms of class struggle and control of oil-derived capital than of interactions “between princes and people.” He said:

“Almost without exception, this scholarship treats it solely as an energy source or transport fuel—disregarding completely the other aspect of oil’s mid-20th century emergence as the dominant fossil fuel: the birth of a world composed of plastics and other synthetic products derived from petroleum.  From the 1950s onwards, a wide array of naturally derived substances—wood, glass, paper, natural rubber, natural fertilizers, soaps, cotton, wool and metals—were systematically displaced by plastics, synthetic fibres, detergents and other petroleum-based chemicals. This ‘petrochemical’ revolution enabled the syntheticization of what had previously been encountered and appropriated only within the domain of nature; the very substance of daily life was transformed, alchemy-like, into various derivatives of petroleum. Here is oil not as an energy source, but as feedstock, the literal raw material of commodity production itself.”

“Petrochemicals are decisive for the future trajectory of fossil-fuel use: they will almost certainly form one of the fastest-growing sources of demand for oil over the next two decades, and there exists no viable alternative to petroleum as a material feedstock—the basic raw material—for synthetic production. In reducing the problem of oil to simply the question of finding an alternative source of energy and transport fuel, we implicitly confirm the invisibility of petrochemicals. We remake our synthetic world as something natural. As such, foregrounding the story of petrochemicals not only opens an entirely new vista to understanding the intertwined histories of oil and capitalism, it points directly to the necessity and challenges of moving beyond both” New Left Review July/Aug 2021

Reflections on the chemicals industry

What we eat, the advanced materials used in our cars and in our holiday jets, what we wear, how we furnish our homes, how we see colour and texture and how we grow our crops – all come from the silent wraiths of steam rising up from the pipework which runs wherever one looks over the flat marshlands lining both sides of the River Tees, from Billingham to Wilton via Seal Sands.  So is change here possible, even if desirable, or is mangling our metaphors beyond repair just all another Teesside pipedream?

You can read more on the MIMA Exhibition here; MIMA — Chemical City

Gaze: do we still need theatre about women’s rights?

Gaze: do we still need theatre about women's rights?