This is how comedy generally, and most particularly political satire, works: the people with no power lampoon, satirise, or rip the proverbial out of those who actually hold the power. It is a ‘punching up’ from below. 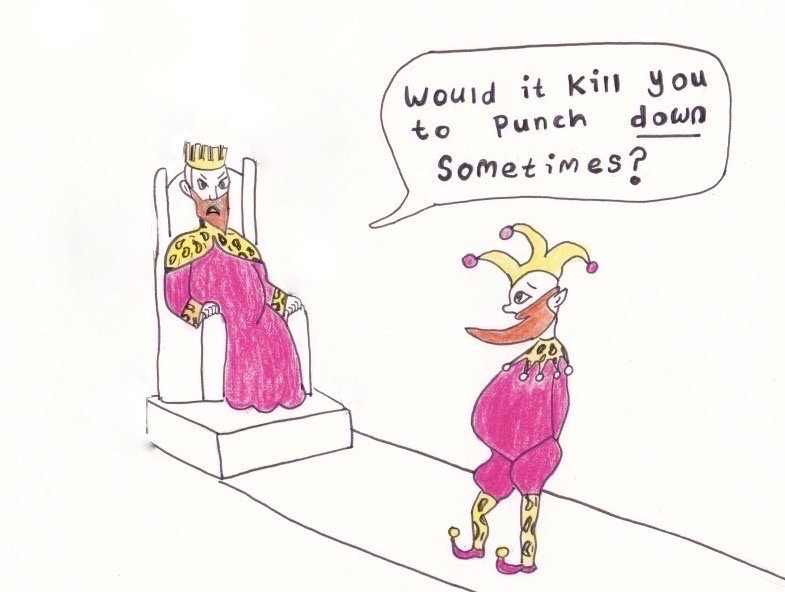 It would have been the first Monday morning of 2014, just after the Christmas and New Year shenanigans. As an actor who moonlighted in law firms I worked irregular hours, and I would sometimes be home on a weekday here and there. This particular Monday was one of those where I either didn’t go into work or went in late – I can’t remember.

I turned on the radio to my default station, Radio 4. At 9 in the morning on a Monday Radio 4 usually serves up Start the Week, a magazine programme in which four guests – authors or musicians or academics, pundits, etc – ruminate upon their work, strung together by an often torturously contrived connection.

And that week, surprisingly, one of those guests was a government minister: Michael Gove (then Education Secretary). He was there to discuss the article he had published in the Daily Mail the day before, the thrust of which was him dismissing the ‘Blackadder view’ of the first world war. This states that the British forces were led by upper class idiots who sent their own men to be gratuitously slaughtered, just because they hadn’t got to grips with the new realities of industrial warfare. Gove argued this was in fact a perversion of the truth, and indeed that, in Blackadder, the BBC was peddling a left wing conspiracy.

I’d studied the first world war at school before Blackadder Goes Forth aired, and I rather got the impression that the Blackadder crew had simply articulated, in a popular medium (with added Baldrick) something which was pretty much the consensus view. But history is a tricky thing, so I thought: fair enough, I’ll look into it.

The fruit of that investigation was this video, which goes deeper into it all. Here’s the skinny: Michael Gove claimed he had academic backing for his thesis that it was all a left wing conspiracy. Not only did he not have that backing, but he’d also somehow missed the fact that one of the key books on the subject, The Donkeys (after the description of ‘lions led by donkeys’), was written by Alan Clark. Yes, I do mean Alan Clark of the diaries fame, who was a minister in Margaret Thatcher’s government – not known to be hotbed of Marxism. So either Clarkey was in reeeeeaally deep cover, undermining Thatcherism from inside Whitehall, or Govey was talking tripe.

That was six years ago. Ancient history, I hear you say. Except that we’ve now got a new government-appointed Director General of the BBC, Tim Davie, who’s said he wants to stop the left wing bias of comedy shows.

And it’s the same tripe.

This is how comedy generally, and most particularly political satire, works: the people with no power lampoon, satirise, or rip the proverbial out of those who actually hold the power. It is a ‘punching up’ from below. The powerless show up the foibles, the hypocrisies, the failures of the powerful who have such influence and even control over their lives. The humour is found in the release of tension. The powerful are rarely, if ever, hurt by this – and when they are it’s usually because they are engaged in a practice so egregious that history will never be their friend anyway.

The alternative is to ‘punch down’: for those with power – or relative power at least – to punch the powerless, the disenfranchised, the vulnerable. Few people find this at all funny, and we have a word for those that do: ‘bullies’.

It might be sustained that there was some left wing bias to the Beeb’s comedy, were it to be evident that the Beeb played favourites by declining to attack certain types of powerful people. If, for instance, if it were the case that Corbyn was not satirised (he was ripped to shreds), or if Blair wasn’t gone for in the jugular (he was). If you’ve any doubts on this, just search YouTube for ‘Ian Hislop, Tony Blair’ and watch a few clips. The Have I Got News For You crew tore him a new one weekly. Or look to the radio where Dead Ringers did much the same. Rory Bremner went for Blair back in the day too.

This idea that the Beeb attacks the right and not the left does not withstand the scrutiny of a two-minute Google.

Six years ago, I checked out Gove’s rewriting of history. A lot has changed in those six years; he hasn’t.

The new BBC Director General is a one-time Tory candidate and Brexiter of the same ideological cast as the government. He has links to this government, who seem to have sent elderly people home from hospital to die of coronavirus in their care homes, where they then also infected their friends. In the face of some alarmed braying about left wing killjoys, the DG has for his part ordered that singers must breathe deeply and sing triumphalist choruses loudly in a confined space in the middle of a respiratory pandemic.

Lions continue to be led by donkeys. Who will have the last laugh?