Make Masks Matter aims to spread positive messages in our communities in a creative way, whilst also protecting each other. 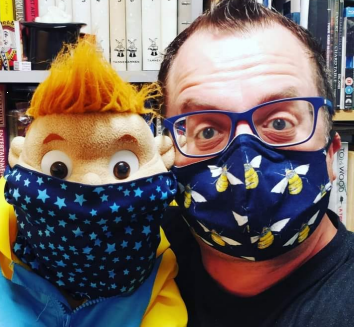 Imagine all the people is a new online community. The group has planned an event called Make Masks Matter from 26th September. I was intrigued and decided to talk to one of the group members to find out more.

Lynne Barnes told me that the group is interested in the theory that it takes only 3.5% of a population to change things through peaceful non-violent actions. She said: “This led us to want to reach out to a wider group of people who would like the world to be a better place. We set up the group using John Lennon’s song title Imagine All the People because the song represents worldwide harmony, unity and peace.“

Make Masks Matter aims to spread positive messages in our communities in a creative way, whilst also protecting each other. The idea is to wear a mask with a message, take photos and publish on social media. Lynne said: ”It’s easy to use a Sharpie permanent marker to write on a disposable or re-useable mask, working your message around the folds so that it is readable when the mask folds are opened while wearing it.”

“Masks are here to stay for some time so get creative with some home-made cotton versions and applique a logo on them.”

The group appreciates that not everyone can wear as mask for a number of reasons and asks people to be kind and sensitive. As someone with respiratory problems, Lynne explained how she had tested her oxygen saturation level after wearing a mask for several hours and found it to be normal:

“I think the claustrophobic feeling when wearing a mask is frightening… so I hope this gives some reassurance.”

According to Venki Ramakrishnan (President of the Royal Society), people in the UK remain more reluctant to wear masks than in other western countries. He went on to say that ‘inconsistent guidance from the UK government’ was a significant contributory factor.

Lynne said: “The (UK) government has created chaos through inconsistent statements and has lost trust with the public. It has lost control. It has reached the stage where we have had to make our own logical decisions based on what is right for the common good and wait for the government to catch on.”

“Imagine there’s no countries, it isn’t hard to do

Nothing to kill or die for
And no religion, too

Imagine all the people
Living life in peace

You, you may say I’m a dreamer
But I’m not the only one
I hope someday you will join us
And the world will be as one

Imagine all the people
Sharing all the world

You, you may say I’m a dreamer
But I’m not the only one
I hope someday you will join us
And the world will live as one”

For sale: God's own county, one careful owner