Matt Vickers, one of the brightest and best of the Conservative Party? 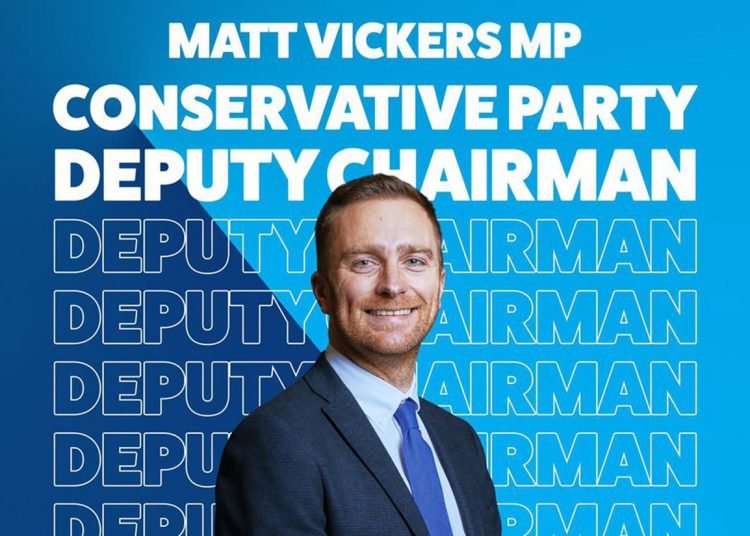 Matt Vickers, Deputy Chairman of the Conservative Party. Has a nice ring to it, don’t you think?

So how does a first term MP from Stockton South become such an influential member of the Conservative Party?

Is it his mature and on point speeches in the House of Commons?

I refer you to his “The Man, The Myth, The Legend” love poem to Sunak. How about channelling his inner Ralph Wiggum “Choo, Choo…Choose me” comedy routine?

Matt Vickers on radio and TV?

Could it be his polished TV and Radio appearances? For instance when on LBC Cross Questions, he was told he was factually incorrect regarding the NI Protocol he said:

“Well that’s your opinion” and “We will agree to disagree”

Him going live on Channel 4 news constantly interrupting Alex Cunningham after being allowed to speak. Then telling us that us Teessiders have so much to be grateful for. Yup, poverty, food banks, lowering life expectancy.

I may be wrong but, it seems his preparation involves jotting down a few talking points and a soundbite or two. Then he must stand in front on the mirror practising his pointing and gesticulating and making sure his thumb is properly prepared. Rumour has it, his thumb has its own carefully worked out fitness regime.

How about him always being available at times of controversy… Check the local paper, it is filled with MP Matt Vickers was “unavailable for comment” and “has not responded to requests for comment”.

How about his rigorous defence of honesty and integrity in politics?

I think it’s pretty obvious that is laughable considering he was loyal to Boris Johnson right to the bitter end.

Aaah, I think I may have stumbled onto the reason he has been voted into this post..

It’s to do with loyalty, isn’t it? Loyal to the party and the PM, no matter what, and being able to bin anything in his drive to further his political career. Morals, ethics, honesty, integrity, rule of law, common decency….absolutely anything.

So, Matt Vickers, one of the brightest and best of the Conservative Party?

That should put a cold shiver up your spine. If he is, then what are the others like?