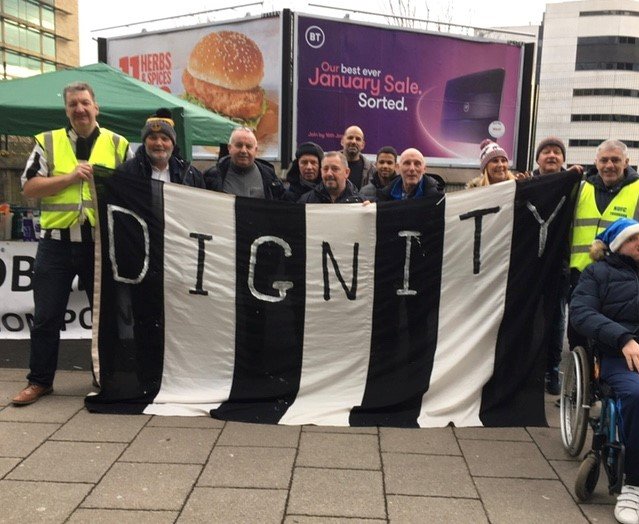 NUFC fans with the 'Dignity' banner Photo by author

History is like the tide coming in; sometimes you see it, sometimes it floods you without warning. The 21st Century started like the tide you can see; a cleaning torrent of optimism that swept doubt aside, giving us what now seems like blissful prosperity, culture and awareness. We even had decent football with Sir Bobby and Newcastle United in the Champions League. Looking back it seems unreal; especially as the tide coming in now resembles an upsurge of sewage in your front room at 3am. Between 2008 and 2010, a combination of Mike Ashley, Nick Clegg and David Cameron started to stink up the crannies, austerity was allowed for 5p carrier bags and the bad times began.

Food should be a right

An optimist looks for positives, but clever people need to be pessimists. Football teaches us that, that the last minute winner for us is an aberration;  normally we are being swept away by better, more expensive, younger footballers from richer teams from inferior cities like Liverpool, Manchester and London….football seeks out contentment and challenges its veracity.

An optimistic search for the silver lining of community resistance should not mitigate the filthy stinking cloud in Benwell, Elswick, Walker, Byker and everywhere. In 2020 in Britain, food should be a right; slaves got fed, prisoners get fed, children of Universal Credit claimants often don’t – or their mothers starve to ensure they survive, then those kids go to school and try to get through the day as their mothers worry.

The necessity for foodbanks is a disgrace

The presence of foodbanks in our city is a disgrace and we long for the day they are abolished. There is no consolation in the resistance of the people as it isn’t worth the outrage to their dignity and hope. The long-term effects of austerity are to be dreaded and need preparation now. Recently, I heard a representative from a charitable organisation admire the ‘resilience of the poor’…why should they be resilient? Why can’t they be happy instead? Leave resilience for engineering…

Colin Whittle, Steve Hastie and I started the Newcastle United Fans Foodbank in late 2016. It has attracted and merited all kinds of praise for its achievements of raising funds and awareness and feeding our fellow citizens since then. Thanks to the kindness and generosity of the NUFC Fans and others at St. James Park, online and at the many events we’ve attended, we’ve collected the equivalent in food, cash and sugar puffs (don’t ask!) of over £350,000 – or enough to cater for about 30% of the needs of the West End Foodbank, which now feeds people all over the city and region.

Even during the Covid-19 hiatus wonderful people like the readers of www.nufc.com have raised £18,000, the UCU (University and College Union) Runners have got us £4,000 and a wonderful feller who tried to sell his prized autographed NUFC shirt because he was skint insisted on diverting the £1,000 his mates raised to us, rather than accept it himself. Utterly heroic.

We’re in weird times. The word ‘foodbank’ is used on adverts to validate corporate social responsibility, clapping for NHS workers happened, delivery drivers were smiled at, and yet the same malicious evil snobbery about the poor is never too far away.

Our first matchday collection vs Sheffield Utd. made over £1000 from a crowd of only 10,000; with wonderful NUFC fans bringing money they’d saved up for us. Readers of www.nufc.com raised £24,000. The “matchday bucket” on Twitter is raising funds at Euro 21 games still. The pressures of the pandemic, increased demand at Newcastle Foodbank (it now covers east and west end) as demand by 61% (April’20-’21) and over 50,000 were fed including 20,400 children; (Figures from John McCorry, CEO of Newcastle Foodbank).
This just confirms and affirms the incredible response of our people towards adversity.

I attended an event the Beatrice Webb Trust arranged in Newcastle a couple of years ago on child poverty. There I learned that 19% of the population absolutely believed that poverty was always the fault of the poor, despite all data and science. They fetishize prejudice and blame, citing ‘facebook-facts’ on drink, drugs, greed, stupidity, laziness, upbringing, culture…. and all the other things that you can hear in impolite society. Just 12% knew that factors of luck or circumstance were the true cause and the rest, (the 69% majority), believed what they read in the newspapers or social media….reading the bile that tabloid columnists regurgitate.

At this conference, amidst the professors and practitioners, I was able to say that we’d never heard any of that 19% (in an average Newcastle United home crowd, that would be 10,000 people) or witnessed their impact. Instead we’d seen kindness, decency, engagement, generosity and care for collectors who are often female, BAME and not match-goers. People who help by collecting in the Gallowgate weather, which is usually cold, wet, windy with occasional snow; people who aren’t wealthy or can even afford to attend the football.

That’s why when we saw Jack Monroe’s article (@BootstrapCook), where she described the impact that poverty, insecurity, cold, and stress still had on her life; the weirdness of fame without fortune; the anger and isolation, the emotional impact that waits when she jumps at loud noises, we had to send our support from football fans. There are many negative issues that come with being a football fan. People may think, or have been told, that we’re pot-bellied, drunken, violent sexist racists; they’d be wrong, but people always know that we stick with our friends.

If you need to feel part of something, being in the middle of the Gallowgate End, drunk and full of communal rage, exploding with utter delight at a last-minute winner against Chelsea in a volcano of emotions that doesn’t care what gender, orientation, age,  race, creed, wealth,  opinion, (dis)ability or anything that you are…that should be on an NHS prescription. Maybe one day it will be.

Dan Jackson (@Northumbriana) says the NHS is investigating whether prescribing volunteering (eg at NUFC Fans Food Bank) could be part of a solution for people who now just get pills. Maybe it would be a nice experience for Jack to be part of that – even though it’ll probably be an awful 0-3 home defeat…. Maybe giving our people hope will help them; help their pride, explaining that the truth of the North’s history is one of artistic, economic and social excellence, not poverty, decline and foodbanks. That our future is positive with them.

Jack Monroe is someone we’ve never met or even a person whose voice we’ve ever heard. Her life and struggles are a matter of her personal Twitter record and her bravery, compassion, creativity, strength and resilience shines through, as does her pain, suffering and loss. I don’t know which team she supports though. However, like the Irish saying says, she’s a friend of ours that we haven’t met yet. Our offer to come and have a cup of tea and go to the match is one of undying comradeship and support, because she’s helped us and ours – and she will receive any help we can give her in return.

Newcastle West End Foodbanks Benwell HQ is next door to ‘The Towers’, known by many as ‘Byker Grove’. My Grandad was a Mines Rescue man who worked there. He was, by all accounts a good feller, he and his mates had a saying that they ‘never leave anyone behind’; they bring the men back, alive , dead or broken… he used to say “ keep a’had” (keep a hold) at times of trouble. It means to gather your strength to resist the moment and wait for better times.

We’re not accepting Foodbanks for our people. We, in common with other football fans, have designed the “Right to Food” plan. It advocates free meals for all at school (and teachers!!), it advocates keeping premises open after school so communities can be fed, or be with company and overcome the isolation of the pandemic. We’re going to hold a public meeting in September to advocating this, and a “Living Income” and showing the work of the Pathways programme at the Foodbank.

The pandemic showed Foodbanks, (and homelessness) could be abolished by government in a week if necessary. We’ll remember that and keep going until they are a memory. We’ll be outside St. James Park for the new season.

We say that to Jack Monroe and everyone, that the summary starvation, degradation and condemnation of our fellow citizens will not stand. We will win and our revenge will be the laughter and contentment of the people.

Jack Monroe will always be a heroine for what she has achieved already. Being a wonderful mother, being strong in adversity and being a hopeful human being. I reckon she’s a pessimist; but she’s welcome here any day. She read the article and said she’d come when she was able. We all look forward to that.