Part 1 of Brendan McBear's adventures on a Middle England pilgrimage with Chris Humble (the 'Big Eejit). A corridor is needed. 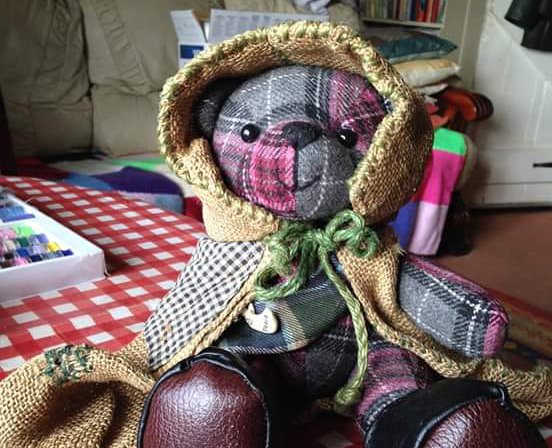 Brendan is a bear. His association with Chris Humble began when the Northumbria Community asked Chris to take him on his pilgrimage to every Anglican cathedral in England.. Initially Chris wasn’t that keen but soon found that his Celtic charm and ready wit opened doors around the country! Here is Part 1 of a different pilgrimage, that of Middle England.

The Big Eejit (BE) has asked me to introduce him for an explanation of our new pilgrimage, which starts on Monday 17 May, all being well. As is always the case with the old fool it’s another of his hare-brained schemes, but this one is beyond the ken of a humble bear (d’you see what I did there) so BE is going to write it and I will simply butt in with the odd sarcastic remark…sure, he can’t get rid of me altogether!

About 20 years ago, whilst traversing some of the wonderful long distance footpaths this country has to offer, along with my late great mate Antony Crerar, we got to talking about alternative walks we could undertake. I came up with the idea of walking the length of the country, from the south coast to the Scottish border, following a route through the exact centre of England. ‘Middle England’ – the name came with the idea all those years ago – has been on the back burner ever since, largely because there’s always been somewhere warmer to go. But now we have our second Covid summer, and most of the warm places are closed! This, combined with clear prompting from Father, has led me to revive and revise the plan.

Middle England, is not, of course, a specific geographical location, but rather a way of living, a way of being. It is a socio-political term. The phrase has both positive and negative connotations. To use extreme examples; it denotes an England in which racism and ignorance can abound, but also where warm beer and cricket on the village green may combine to create the perfect, friendly, summer afternoon.

The writer Nick Inman has likened Middle England to JRR Tolkien’s Middle Earth. “We know everything about it except where it is” But do we? As long as I have had the idea fermenting in my brain I have always felt that the journey should be an exploration, taking in the places and people of the country and improving my somewhat inadequate knowledge of my homeland. An experiencing of what makes up England in it’s collective, post-Brexit and hopefully soon to be post-Covid state.

My good friend and brother Jim Bailey has pointed out that the title ‘Middle England’ also gives a nod to the Middle Ages, when pilgrimage was a way of life, and almost compulsory for many.

A corridor comes to pass

An idea hatched 20 years ago is almost bound to be subject to changes from the original. The first revision was a practical one. Clearly I would not be able to exactly follow a line through the centre of the country. It would encounter impassable obstacles such as lakes, it would cross private land and go through private buildings (it almost goes through my friends Jim and Amy’s front room in Derby!). I needed a corridor in which I could travel to allow me to bypass such impediments.

I commissioned a cartographer (take a bow Ed Merritt for your attention to detail, saintly patience, and genuine enthusiasm for the project) and instructed him to accurately determine the middle line through the country – which he did by programming his computer to identify central points at regular intervals of a few metres on an Ordnance Survey map by measuring from east coast to west coast, and, when Wales came into the equation, from east coast to the Welsh border.

Then I asked for parallel lines 5 miles either side of the central line, to allow for the avoidance of obstacles. I studied the finished version with great excitement, only to realise that, 5 miles may not be enough. I asked Ed to increase the parameters to 12.5 miles either side, creating a 25 mile wide corridor through the exact centre of England.

Reasons for making the corridor wider are:

1. I’m nowhere near as fit as I was when I conceived the idea 20 years ago and the idea of walking 400 odd miles does not appeal as much as once it did!

2. The journey is partly predicated on meeting people and you don’t meet that many when you’re walking on remote footpaths.

3. I’ve also decided to include visits to as many pilgrim sites as possible. A ten mile corridor did not allow for many such visits, which will involve a good deal of zigzagging away from the central line.

For all these reasons I’ve also come to the conclusion that some public transport will be required to accompany Shanks’s pony. But only local transport; a bus here, a tram or train there, possibly even a short hop in an Uber if (when!) it pours down! I feel that this will only enhance my experience as it will allow me to meet more people.

The discipline of the corridor will be absolute. Only an emergency (or an inability to delay the date of my second Covid vaccination) will cause me to leave it. There will be no rest day jumping on a train to Blackpool for beer and beach as Antony and I once did after a particularly arduous stretch of the Pennine Way! This may seem legalistic and pedantic, but for me it is part of the discipline of the pilgrimage. No distractions.

By sublime contrast, there will be no plan or schedule, other than to leave the south coast just beside Hengistbury Head near Christchurch and arrive at the Scottish border close to the source of the River Rede, half a mile or so from where the A68 crosses Carter Bar. The journey will be Peregrinatio – wandering for the love of God. ‘Pilgrimage is what happens’.

I have no fixed finishing date, and hope not to book overnight accommodation until at least the afternoon of each day, seeing which landing stage our imaginary, Celtic, oar-free coracle takes us to (we’ll pretend to use Brendan’s, though it may be a squeeze!) and trusting that to be the place I am meant to stay.

I hope you’ll join Brendan and I on the journey. Literally, if you like. We would love to be accompanied, for half a mile, half a day, half a week, by any or all of you.

“Dat’s a sure ting so it is. Sure, i’ll be sick of the sight and sound of him before the first week’s out and I’ll be ready for some intelligent company”.

Sigh… I had thought Brendan may allow the introductory article to be interruption free… The map below shows the corridor; please get in touch if you’d like to spend some time in it with us.

In closing, I’d like to dedicate Middle England to the memory of my friend Antony, who would surely not approve of such unscheduled wandering. Ant’s response to any suggested (often precipitous) detours in guidebooks to The Pennine Way and other National Trails was always “Let’s not, and say we did”.

You can read more below.