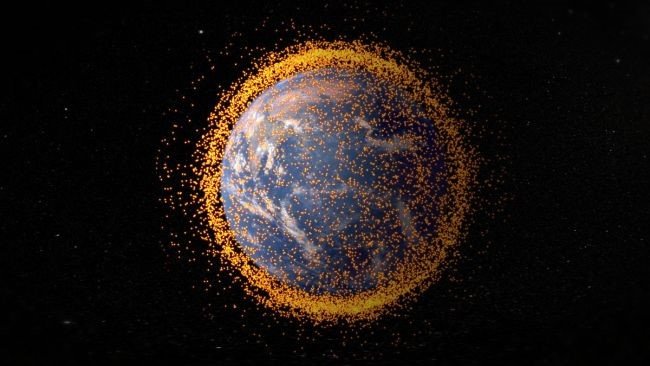 This NASA graphic depicts the amount of space junk currently orbiting Earth. The debris field is based on data from NASA's Orbital Debris Program Office. Image released on May 1, 2013.  Image credit: NASA's Goddard Space Flight Center/JSC These pictures are considered open to the public and may be freely viewed or downloaded,

On July 3rd 2020 Government announced it had, in partnership with Indian telecoms company Bharti Global Ltd, led a successful bid to acquire the bankrupt satellite broadband company OneWeb. The UK’s reported £400 million investment resulted in a 45% stake in the company with Bharti Global Ltd holding the other 55%. Finalisation of the details of the acquisition is ongoing.

Darren Jones MP, chair of the Business, Energy and Industrial Strategy Committee, was surprised and concerned about the investment. Of particular concern was when it transpired that that the acting permanent secretary had raised concerns, warning that the deal was “unusual … the central case is marginal and there are significant downside risks, including that venture capital investments of this sort can fail, with the consequence that all the value of the equity can be lost.” However, Business Secretary Alok Sharma overrode these concerns and the government went ahead with the bid. The Financial Times reported that Number 10 advisor Dominic Cummings was ‘instrumental’ in pushing for the bid.

Jones’s committee instigated a review, and a fairly low profile first hearing of the committee was held last week (Thursday 17thSeptember) to take evidence on the technical aspects of the purchase.

The meeting commenced with Jones advising that Government had prevented one of the planned witnesses from attending on the grounds of having been involved as an advisor to the Oneweb purchase. Jones confirmed that this was unsatisfactory and that he had written to protest that it was not up to government to control who could give evidence to the committee.

Professor Ziebart started giving evidence listing what we have lost through Brexit by exiting the European Galileo satellite navigation system. This includes loss of access to technical development and operation of the system, loss of research and development opportunities and jobs together with the loss of access to the most secure classes of signal. The latter making us vulnerable to state and criminal activity, driving the previous Prime Minister, Theresa May, to initiate planning for a UK ‘sovereign’ alternative project as a replacement for Galileo.

A key motivation for the Oneweb bid was thought to have been the possibility of repurposing its satellite technology and using it as an alternative to the UK project initiated by Theresa May. The expert witnesses were very sceptical of this possibility which, while not thought impossible, had been tried in the past and failed. There were a number of technical challenges which would require a major commitment to further research and development. Unlike the GPS systems currently operational (there are 4) there are no proven Low Earth Orbit GPS systems in operation. It is therefore no surprise that the Telegraph (19 Sept 2020)reported that it has had confirmation that the multi-billion Theresa May alternative has been finally scrapped and that some UK officials are believed to have pushed for the Government to examine a return to the European Galileo project!

Witnesses were all generally supportive of an increased UK involvement in the space sector and the resulting development in expertise and jobs which may be derived from such an involvement. There was surprise at the government’s Oneweb purchase, but it could be seen as a pivotal step in the development of the UK satellite sector.

Back in July, on winning the bid, UK Business Secretary Alok Sharma had said “This deal underlines the scale of Britain’s ambitions on the global stage…. and the deal presents the opportunity to further develop our strong advanced manufacturing base right here in the UK”. At the time it was thought that manufacturing of the Oneweb satellites could return to the UK. The satellites are manufactured through a Oneweb/Airbus Joint Venture (Oneweb Satellites) at the company’s new Florida factory. In an interview with the publication Space News last month, Debra Facktor who is head of Airbus U.S. Space Systems, and who also sits on the OneWeb Satellites’ board, dashed hopes that satellite production could move to the UK, by affirming “We are committed to the US. We are in the space market and we’ve invested in Florida, so keeping our Florida operations is absolutely our intent and our plan.” The Florida factory opened in July 2019 with 250 new US jobs.

This first committee meeting was focused on the technical aspects and risks associated with the purchase. Witnesses stressed that the sector was akin to a gold rush of the old wild west with players rushing to secure their positions in space, and proceeding within limited or no legal frameworks. Oneweb had taken an early lead in the sector but has since been overtaken by Elon Musk’s SpaceX, particularly with its ‘in house’ capability to launch SpaceX satellites.

As may be expected, it is a high-risk business although the broadband capability is proven technology and with the new Florida based production line, required production can be practically assured. Operational risks could arise from the vast numbers of satellites which will be in the skies in the near future. At the moment about 2,000 active satellites orbit Earth, but SpaceX alone plans to increase this by up to 42,000, with thousands more planned by Amazon (Kuiper Satellite Constellation), OneWeb, and others. If satellites collide, they can produce thousands of pieces of debris that can potentially hit other satellites, as occurred in 2009 when in an active U.S. satellite collided with an old Russian military satellite creating a large cloud of thousands of pieces of dangerous debris. A small piece of the Russian satellite debris safely passed by the International Space Station (ISS) in March 2012, at a distance of approximately 120 metres. As a precaution, ISS management had the six crew members on board the orbiting complex take refuge inside the two docked Soyuz rendezvous spacecraft until the debris had passed.

There are probably even greater financial risks but discussion on these was curtailed by Jones when it was mentioned that Oneweb was reportedly asking the new owners for a further £1 billion to continue development. Jones reminded the Energy and Industrial Strategy Committee, that this was a technical session and that they did not want to pose any risk to the ongoing commercial negotiations. However, in general terms it was noted that satellite-based broadband was an expensive and commercially risky business. Historically only 20% of sector start-ups proved viable and only 10% had proved significantly profitable. There was a clearly very large potential market of billions of potential broadband users who currently do not have access to reliable broadband, that these potential users could afford connection to the satellite-based systems was not at all certain. In the current environment price competitiveness with other major players and alternative systems providers is a significant challenge. Committee Chair Jones added, with a hint of irony, that “given he had constituents in Bristol who were desperate for good broadband connectivity, he was sure they would be thrilled that the UK government was now in the business of providing internet to the world.”

A recent (and disputed) Virgin Orbit claim against OneWeb for $46.32 million of a termination fee for previously cancelled launches is probably a minor constellation in the space race financial galaxy in which the UK now finds itself, fearfully navigating round the black hole at the centre. It is perhaps telling that Boris Johnson is now moving out of low earth orbit for an unrelated ‘moonshot’ to combat Covid-19.

The Business, Energy and Industrial Strategy Committee will continue with the enquiry at a future date and it is hoped it will not be eclipsed by another government attempt to prevent witnesses from attending.