I was put in Rose dormitory, which slept about 12 of the youngest pupils; we were allowed to take a cuddly toy to bed with us, so I had my woolly elephant. I had to give him up when I graduated to Thistle dormitory 18 months later. 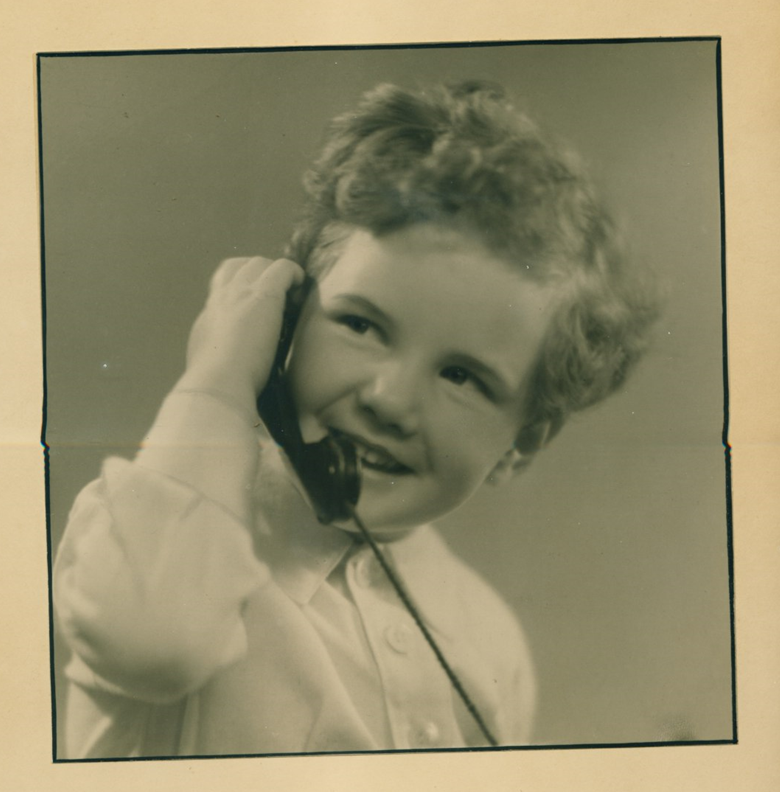 Before the war: Jim Walker aged 3 or 4 years Photo supplied by author

I was born in St John’s hospital, Chelmsford, on a lovely sunny Whitsunday in 1935. My mother told me that the obstetrician was so anxious to get out to play golf that he dragged me into the world with forceps before I was ready, causing a permanent birthmark on the side of my neck. I still don’t know whether it’s true or not that forceps can do that or whether I would have the birthmark anyway.

The four-storey house I was brought back to when my mother came out of hospital had seven bedrooms and a large garden. My parents employed a full-time gardener (Ely), a nanny (Nanny Banks), a housemaid and later, before I went to school, a governess, whose name I’ve forgotten. Nanny Banks had ginger hair and I thought that she was beautiful.

Then came the war.

Ely left to join the Home Guard, Nanny Banks left for a better-paid job in a factory, the tennis court was dug up to grow vegetables as part of the Dig for Victory campaign and to create a hen-run for a supply of eggs. Beehives were placed on the flowerbeds. My Uncle John joined the navy, so my Aunt Meg and her son David came to live with us. My Aunt Gee, who was my father’s dispenser, was bombed out of her flat so also came into the household. And our two coal-cellars were converted into bomb-shelters.

I can’t remember much about my first school. It was a private infant school called St Cedd’s, run by the headmistress Miss Ticken-Smith (“Tickin’-like-a-clock Smith”, said Uncle John, which I thought very amusing). Three other things I recall are: sobbing my heart out as I sat on the toilet, to which I’d been sent because I couldn’t do my sums; learning French vocabulary from little flashcards (“What’s this called?” – flashcard with a picture of a lion on it – “Le lion”); and at the beginning of every day having to recite a prayer which began, “Ah Father we chart in heaven” (I had no idea what it meant).

Our parents thought that it would be safer for us three boys to go to Canada, away from the bombing and the coming Nazi invasion. Then came the torpedoing of the SS City of Benares, with child refugees on board. We were sent away to a boys’ boarding school in the Surrey countryside instead.

I was put in Rose dormitory, which slept about 12 of the youngest pupils; we were allowed to take a cuddly toy to bed with us, so I had my woolly elephant. I had to give him up when I graduated to Thistle dormitory 18 months later.

Our uniform consisted of a grey shirt, short light-brown corduroy trousers, brown crew-neck jersey, brown stockings and brown shoes. On Sundays, we wore a brown suit (still with short trousers); because my mother was a Mackay, I wore a brown jacket and a Mackay kilt.

Punishments: for trivial offences, we were given lines; for more serious ones, we were beaten. If a serious offence was committed during the day, we were caned; if it occurred after bedtime, we were hit on our bottom with a wooden spoon. Some teachers also had their own methods to hurt us. For example, the headmaster used to hang boys over hot radiator pipes by the back of their knees. And my Latin teacher used to stand behind my desk when I was translating from Latin, grab me by both ears and, every time I made a mistake, pull me up an inch or two; so, if I made lots of mistakes, I could end up suspended by my ears – very painful.

The curriculum: in the first form we did Reading, Writing, Arithmetic (the three Rs); Scripture; Latin and French; Art and Handicrafts; PT (physical training) and Games. Later up the school came History and Geography; Carpentry; and, in PT, Boxing and Dancing. We had to go to chapel every day except Saturday but twice on Sunday.

The Headmaster, Major Tom Reynolds, had served in the Indian army and believed in military discipline and patriotism for boys. So our “houses” were named after the dominions of the empire: India (my house), Canada, Australia, New Zealand and South Africa. And our dormitories were called by the names of Great Britain’s national flowers: Rose, Thistle, Daffodil and Shamrock.

Major Reynolds was also obsessed by bowel movements. At the start of every term, he gave us a talk on how important it was for our health to empty our bowels at least once a day. He himself, he told us, was a twice-a-day man; we could be twice-a-day men like him or just once-a-day men; but it was essential that we went daily. In order to ensure that we did indeed go at least once a day, he instituted a system.

For the 7/8-year-olds in Rose, we had to go in turn to the lavatory outside our dormitory; when we had opened our bowels, we were forbidden to pull the chain and flush; instead, we had to call Matron, who would come to inspect what we had produced. There was a flat shelf inside the lavatory bowl on which our turds rested so that she could have a good look; if she was satisfied, it was she who pulled the chain and called the next boy to come and do his business.

When we moved out of Rose, the system changed. There were four cubicles in the lavatories downstairs so we were divided into four groups. Outside Major Reynolds’ study was a row of four pairs of nails and on nails 1, 3, 5 and 7 were hanging pegs, each peg with the name of a pupil on. If your name was on peg 1 in your group, you went to your allotted cubicle, did your business, flushed (no Matron inspection now), returned to the pegs, transferred your peg to the empty nail and called the boy whose name was on the next peg; and so on until every boy in the group had been. Then the Headmaster could come and look at the pegs all hanging on the 2, 4, 6 and 8 “Done” nails and satisfy himself that all bowels had been well and truly opened. What would Freud have said?

The other monitoring that took place was over our letter writing and any reading matter we received in the post. Every Sunday, we gathered in a classroom to write letters home. The teacher would write headings on the blackboard to help us remember the events of the past week and, when we had finished our letter, we took it up to the teacher, who checked it. What he checked it for, I never knew, for I never had a letter rejected. As for the reading matter, every magazine or book that came for us in the post was vetted by either Major Reynolds or his wife to show that it had been approved for reading. Again, I never had anything rejected but had to persuade Mrs Reynolds to initial a copy of the Picture Post which my mother had sent me: it contained pictures of Belsen after that concentration camp had been liberated by British soldiers in 1945.

General Montgomery sent his son David to Amesbury and became good friends with Major and Mrs Reynolds. He used to come and stay with them to relax in the days before D-day, for example. He would then be asked to give talks to us about his campaigns during the war, boasting about how he’d “knocked Rommel for six” in North Africa. He also had a liking for young boys and used to come into the bathroom when we were taking our Sunday baths, “to see how you boys are getting on”. More on that, perhaps, when I write about my teenage years.

It's still a man's world