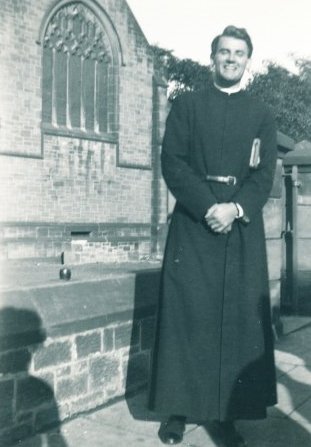 My brother John, the vicar - photo by author

When I finished my law course at Cambridge, I had to think what I would do with the rest of my life. The Careers Officer thought that I was suitable for selling, so I was interviewed (and accepted) for jobs at Simpson Piccadilly (retail), IBM (computing) and Pfizer (pharmaceuticals). I chose Pfizer, because they were labelled “ethical”, which I found out later meant merely that their products could be bought only on prescription.

I was a management trainee, which meant that I had to do a stint in various departments of the company before I got some kind of management post. I started off in marketing and was given the task of dreaming up names for drugs, not because the drugs had already been devised but simply in order to register the name and thus prevent competitors using it in future. I also visited the factory in Sandwich and saw vast vats of antibiotic powder being emptied on to a bare concrete floor, where it was piled up and then shovelled into drums by diesel-driven mechanised shovels. “Here, have an antibiotic capsule; just ignore the cement dust.”

The company trained me as a sales rep, using American films showing salesmen (and they were all men) selling yoghurt to housewives. Before the pharmaceuticals market was entered after the war by Big Pharma from America, all reps had to have some kind of medical background; but Pfizer took on anybody who could sell, sell, sell. And it worked. For example, the week after I had visited the GP surgeries in an area, plugging the drug of the month, I would go round the local chemists’ shops. And, without fail, the number of prescriptions for that drug would have shot up: the GPs would have accepted whatever little gift I had given them – a Pfizer notepad, a Pfizer pen, a Pfizer paperweight – and been prompted to write prescriptions for the Pfizer drug.

And prescriptions meant profit. When, as part of going the rounds with various Pfizer departments, I visited the Research and Development (R&D) department, I found something quite interesting. Pharmaceutical companies claimed that they spent so much money on researching and developing new drugs that they had to recoup those costs in the pricing. I was told that it was true that R&D cost a lot; but (a) most new drug discoveries were made in university laboratories, not by pharmaceutical firms, and (b) most R&D costs were taken up on cosmetic aspects (the pill coating, the taste, the packaging, etc.)

My parting with Pfizer occurred because of a very unethical act by a newly appointed marketing manager. He had devised an advertisement for the British Medical Journal which quite simply misquoted from a research study on a new version of a particular Pfizer drug, claiming for it an efficacy which the study did not support. I resigned.

So commerce was not for me. What next? “I’ll try teaching,” I thought. My brother John was now a vicar and a governor of Staveley Road Secondary Modern School in Chiswick, London. I wanted to see what teaching was like and he got me a temporary job there. (This was when you didn’t have to have a teaching qualification in order to teach; you just had to have a degree.)

The subject that I was given to teach was English. The teacher in charge of English was a man (as were all the other teachers) who believed in authority and discipline. He told me that, in the drawer of the teacher’s desk in the English classroom, he kept a heavy ebony cylindrical rule. “If they do anything out of line,” he said, “just whack them on the hand with that.” The Science teacher used a thin metal rod used for clamping test-tubes onto; others threw blackboard dusters or other missiles. If a teacher punished a pupil physically, the incident was supposed to be written up in the school’s punishment book; if the headteacher punished a boy, that indeed was written up but nobody else bothered. I’ve never hit a pupil in all my 43 years of teaching and I didn’t start then, which, admittedly, may have made the experience more daunting than if I had conformed but I believe that educating through physical punishment is immoral and fruitless.

So, despite the experience which I had had in Chiswick, I took two decisions: first, I would get a teaching qualification and second, I would teach abroad. I therefore applied to Her Majesty’s Overseas Civil Service to fulfil both those aims and was given a place on the Postgraduate Certificate of Education course (PGCE) at the University of London. I was also told that I would be posted to a secondary school in Uganda to teach English. My degree at Cambridge was in French, Russian and Law; but I spoke English with a so-called “received” pronunciation and therefore could presumably teach the language to foreigners.

Before the PGCE course started, I had to find myself a three-week placement in a school. So I went to my local education office in Shepherds Bush and asked them to help me. There was a school in their borough which was short of teachers and the office was only too glad to place me there.

The experience was even worse than the experience that I had had at Staveley Road. Holland Park Comprehensive School had just opened nearby and any parent who could read the option form and cared about education had chosen to send their son there. Others went to Shepherds Bush Secondary Modern.

Shepherds Bush Secondary Modern had some interesting features. First, immediately after roll call in the morning and afternoon, the caretaker used to lock the school gates, because boys had been declaring themselves present and then goofing off on to the streets for the rest of the morning or afternoon. Second, the headteacher used to spend an inordinate length of time in the magistrates’ courts, because boys were constantly in trouble with the police and few parents went to court to speak for them, either because they did not speak English or because they could not be bothered. Third, although many of the boys were recent immigrants and spoke very little English, no attempt was made to help them: they were just left in the lessons to “get on with it”. And fourth, boys of Greek Cypriot origin and boys of Turkish Cypriot origin (both of whom were numerous in the school) were put in the same classes together. “So what?” you might say. Well, these boys were in London because their families had left Cyprus to avoid the war between the Greeks, the Turks and the British, each of whom had been killing the others in a bitter struggle for liberation.

Despite this experience, I still wanted to be a teacher and embarked on the PGCE course itself.