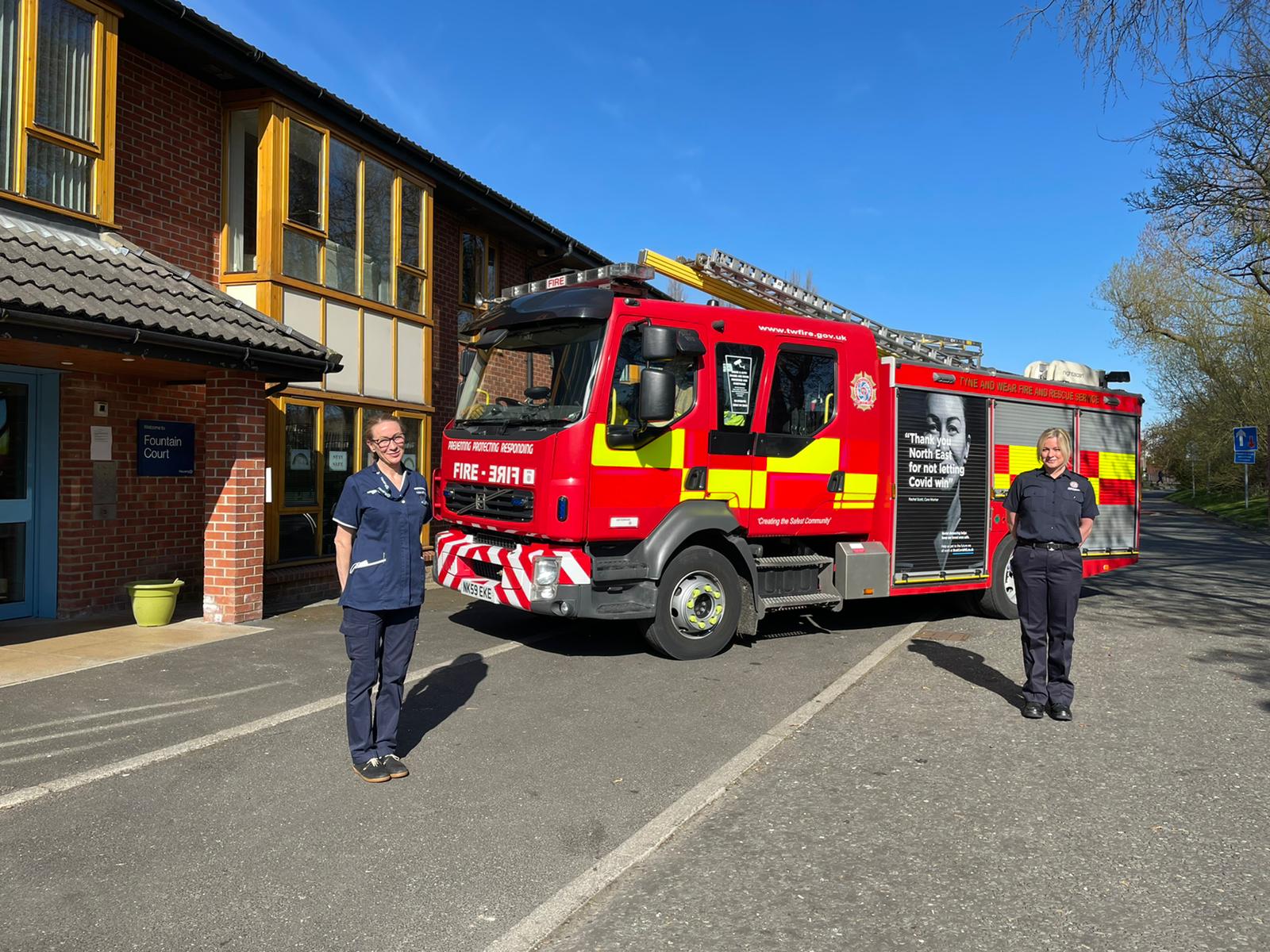 Photo by TWFRS Used with permission

Rachel Scott, a care worker in Gateshead is one of the faces of frontline workers during the pandemic. You will see Rachel and others like her, on a number of Tyne and Wear Fire and Rescue Service fire engines and other public facing vehicles. This initiative is part of Beat Covid NE. a region-wide campaign with a real commitment to public service in the North East.

Rachel has worked for the past ten years at Fountain Court, an Extra Care Housing scheme in Bensham, which is operated by Housing 21. Originally from Durham City, Rachel has called Gateshead her home for the past 20 years.

Rachel was always destined to pursue a job that involved looking after people, as she gained a Nursing Diploma from Gateshead College.  After the death of her mother when Rachel was just 16, her career path turned to working in a call centre to bring home a permanent income. But in 2007 she gave up work to become her Dad’s full-time carer: when he was diagnosed with a terminal illness. Rachel’s daughter, Hazell, aged six was named after Rachel’s late mother.

“This campaign perfectly highlights our community spirit as we are all in this together.  Fighting the same fight,” said Rachel.

She describes her role as part of the care team as “…the best job I’ve ever had…I can’t imagine myself working anywhere else.”

Throughout the coronavirus crisis Rachel has been a vital key worker continuing to help look after the 40 tenants at Fountain Court.  Rachel adds: “People working in a wide variety of different jobs from the care community to the emergency services have played an integral role fighting against Covid-19. And I’m very privileged that residents recognise me from being pictured on the side of the vehicles as they realise I’m a real person with a real job helping to look after local people.”

Rachel’s daughter Hazell tells people “My mammy is famous!” They even get stopped in the park by other dog walkers asking if she [Rachel] is the lady on the side of the fire engines. When the nation was clapping for the NHS on a Thursday evening, Hazell’s school friends said the following day, “…we were clapping for your mammy last night”.

Beat Covid NE is a campaign being delivered across the North East region with a dual purpose to not only provide guidance about how the public can continue to tackle Covid-19 in their daily lives.  But also as a way of saying a big thank you to people who have adapted and made huge changes to their lives to help themselves and others to beat Covid-19 head-on.

Sarah’s Dad, Melvin, is a tenant at Fountain Court and Rachel is one of his care workers.  The bond and relationship between the three people has grown ever stronger during the pandemic and the numerous lockdowns, as Rachel has been Sarah’s communication lifeline to her dad, especially as family members haven’t been able to visit residents during the majority of the pandemic.

Melvin, aged 68, is a former ash felter by trade and enjoyed a rock and roll lifestyle travelling around the world on his motorbike before he settled down.  He is dad to Sarah and Jessica, and has two grandchildren, Kennedy aged 17, and Esther aged 6 (who are both Sarah’s children).

Melvin moved into Fountain Court after suffering a stroke, which robbed him of his independence.  He heavily relies on Sarah and her oldest daughter Kennedy for support, but due to Covid they were unable to see him in order to keep him safe. With Sarah working on the frontline as a firefighter there was a high risk of her passing the virus to her dad.

Sarah, Rachel and Hazell all recently gathered at Gateshead Community Fire Station to see for themselves the new Beat Covid NE poster campaign on the side of the fire appliance. A station where Sarah has worked for the past 14-years.

Sarah said: “Covid-19 was alien to us all.  It was a really difficult time for everybody as we were all in the same boat.”

Soon after lockdown Melvin was hospitalised for several weeks at the Queen Elizabeth Hospital in Gateshead with a serious infection, which later turned out to be Covid-19.

Sarah added: “We were so scared. Our family believed we wouldn’t see him again as all of his health conditions required shielding, and the outcomes being reported in the media of similar cases were very concerning.

“But miraculously my Dad recovered and was able to return home. We visited him outside the care home window, and he sat on the other side with a big smile on his face.  He told me – I thought I was a goner!”

The following weeks Melvin became very down as it took him awhile to recover.

During this time the family planted flowers and hung fairy lights outside of his bedroom window.  They also covered the windows with rainbows and sent gifts in the post.

Sarah’s firefighter colleagues from Green Watch at Gateshead Community Fire Station even helped her to spell out “Love U Dad” using fire equipment to cheer Melvin up.

Sarah said: “Rachel could see my distress and always tried to reassure me. She goes above and beyond in everything she does, and is the most amazing person. She would pop in every day always buzzing and chirpy.

“I have received frequent and precious updates over the last year as Rachel became our lifeline.

“We will never be thankful enough for how great she and the other staff have been during these times. She has the biggest heart and the type of person who inspires you to be a kinder version of yourself without even knowing it.

“To start duty faced with her face on our fire appliance promoting the strength and community spirit in my home town was a proud moment. We have really held it together in Gateshead and tried our best to care for each other.”

People across the North East will be able to see the Beat Covid NE campaign on the side of public service vehicles like refuse collection trucks and fire appliances.

A "manifesto of hope": Jessie Joe-Jacobs will keep on fighting despite positive Covid-19 test