In 1954 all young men had to do two years of national service. 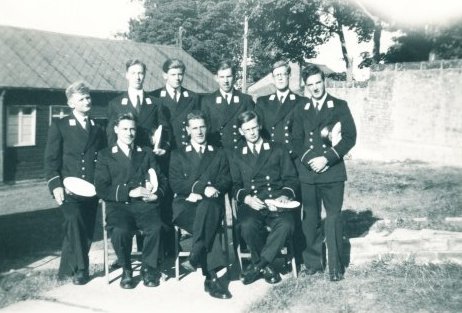 In 1954 all young men had to do two years of national service.  Unless you deferred it (to become an apprentice or go to university) you went straight from school, as I did.  It was a prospect that few relished.  But few went on to have quite the experience that I did.

If you joined the Royal Navy, you could volunteer to learn Russian. I had no desire to spend two years square-bashing or killing Mau Mau in Kenya so that was the option I decided to go for. But, when I go my call-up papers in November 1953, I was told to report for service in the army. Mr Reynolds, the Headmaster, rang the War Office and my call-up orders were changed so that I could join the navy as a coder.

After basic training in Portsmouth and HMS Mercury in Hampshire[1], I went to the Joint Services School for Linguists (JSSL) outside Bodmin, Cornwall. There, national servicemen from the army, navy and air force started their basic course in Russian. Our pay was four shillings a day (about £12 a month).

After about six weeks, the naval coders who had done well in an exam[2] were interviewed for the interpretership course at the School of Slavonic Studies in the University of London. You may not be surprised to know that most of those who passed this interview had been to private schools or grammar schools. I was one of them and therefore became Midshipman Walker, now paid about £21 a month.

Our teachers in London were mainly academics but also some Russian émigrés. We had to work hard so unfortunately did not have the time during the week to enjoy London theatres or other entertainments but I was able to get home to Chelmsford every weekend. We didn’t get much leave so during the university breaks we had to get into our uniforms and travel to Portsmouth to engage in courses such as firefighting, demolition and sailing.

Then back to Bodmin for what the navy called our orientation course. In London, we had learnt basic general Russian; now we had to learn naval Russian. So there was a time (now long past) when I could have told you in Russian, both in writing and orally, everything about an aircraft carrier or the firepower of a destroyer.

We spent four months in Cornwall in the glorious summer of 1955. I had my first car (a 1933 two-seater Morris with a dickey[3]) and later I brought down a Vespa scooter. That was in the days when trains had large luggage vans so I just popped the scooter in the luggage van of the London-Penzance train and rode it up to the JSSL camp from Bodmin Parkway.

Then I became a British spy.

I was posted to HMS Charlotte, a land-based listening post just outside Kiel in Germany. But I first had another assignment.

In 1955, Anthony Eden, the then prime minister, met in Geneva with Bulganin and Khrushchov, the Soviet Union’s duumvirate, to agree a thaw in the cold war. As a mark of the thaw, the Soviet Baltic fleet would visit Portsmouth and the British home fleet would go to Leningrad. I and three colleagues from the course were chosen to go along as interpreters.

Before we went, the four interpreters were briefed by a Commander in Naval Intelligence. He told us never to get in a taxi with or otherwise be alone with any woman we met in Leningrad (danger of honey-trap!). His other instruction was that, whenever we met a Soviet officer, we had to steer the conversation round to their personal life and report the details back to him. The purpose of this? If war broke out and the officer was captured, the British interrogator would ask: “And how is your daughter now? Has she completely recovered from that broken leg she got skiing in 1954?”

“My god!” the officer would think. “They know all about me! I’m lost” (or some such nonsense). Another example of this was when we were coming up the River Neva to our moorings just downriver from the Hermitage. My job was to be on the bridge, act as interpreter for the pilot and pretend to have a cold. Why? Well, our photographer was on the deck below taking pictures of all the naval installations along the river bank. If the pilot looked like getting too close to the edge of the deck, from where he’d be able to see our photographer, I was to sneeze loudly and drop my handkerchief over the side, thus warning the photographer to get out of sight.

The whole time that we were in Leningrad – day and night – both banks of the river were lined three deep with Leningraders just coming to look at us. And when I went ashore and they found that I could speak their language, I was a star! They hadn’t seen any westerners since well before the war and they just wanted to talk with me. “Why were workers in Britain so downtrodden?”; “Why did our government want to launch an attack on the Soviet Union?”; “Why did the cigarettes [Benson and Hedges] that you just gave me taste so awful?” and so on and so on and so on.

The visiting British officers were invited to a meal in the Soviet officers’ wardroom. Somebody must have been to a British cocktail party: when we were called to table, we found that there were no chairs to sit on; we were expected to stand throughout the meal. And the meal was very good. When we had finished, it was time for toasts. So we toasted the heads of state, the prime ministers, the admirals and I can’t remember who else.

The custom in Russia is that the toast is drunk in vodka and each toast has to be drunk “do dna” – to the bottom. I noticed that, between each toast, the Russians were taking a drink of soda water and a piece of bread; so I did the same. But some of my brother officers were not so careful and, having drunk toasts to the fleet, to their ships, to their mother, to their sister and to each other, they found themselves more than unsteady and learnt what “to drink somebody under the table” really means.

Then to HMS Charlotte to spy on the Soviet Baltic coastal defences. Every so often, the navy would send a fast motor torpedo boat as close as possible to the Soviet coast; the Americans would send their U2 spy planes over Soviet territory. The aim was to stir up the Soviet defences in the hope that, in their rush to deal with the threat from the sea or the air, the radio operators would forget protocol and speak in clear. Then we, listening with our tape-recorders at the ready, would tape everything and send it back to GCHQ in Cheltenham. There was another listening post in Cyprus doing the same exercise against the Soviet Black Sea fleet.

Of course, this bore the great risk that it would spark the outbreak of hostilities. But that did not lead to its cessation.

In 1958, two of my colleagues, William Miller and Paul Thompson, wrote an article for Isis, the Oxford University student magazine, describing their experience at HMS Charlotte. The two men were prosecuted under section 2 of the Official Secrets Act and sentenced to three months in prison. Of course, they had not told the Russians anything new; they were put in prison because they told British citizens what their government was doing in their name.

My two years’ national service ended in February 1956. I had been selected to be a member of the Royal Navy ski team, racing against teams from the army and RAF in St Moritz in Switzerland. And we had great success (to our and the soldiers’ surprise).

I was demobbed in Chatham and now had eight months to wait until I started my time at Cambridge University in the autumn.

1 The navy has the curious tradition of calling their land bases “Her Majesty’s Ships”.

2 I had done Russian in my last term at school so did enough to get through.

3 There were only two seats in the covered part of the car but, when you opened the lid of the boot, there were two more (rather uncomfortable) seats. That was the dickey.