Today I paid my respects to Sarah Everard at a memorial to murdered women in Newcastle at Grey’s monument. 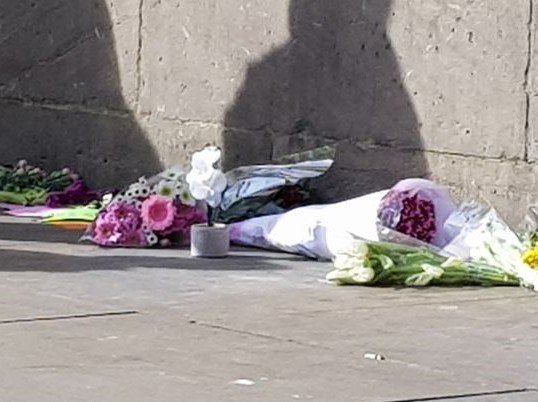 Today I paid my respects to Sarah Everard at a memorial to murdered women in Newcastle at Grey’s monument. People had been invited to place flowers, poetry, letters and banners at the Monument as a way of showing solidarity and paying respect to a multitude of victims.

It was done in accordance with Covid laws by #CalmBeforeTheStormNewcastle who had asked people to leave without congregating on their Facebook event. They promise to do more events once restrictions are lifted. It was billed as a therapeutic way to help us to deal with our anger and make ourselves seen during lockdown.

The horrific Sarah Everard murder has thrown female safety back into the spotlight on the same week the notorious ‘Policing Bill’s second reading was voted through. A bill which fails to tackle violence against women and girls. We all saw the upsetting scenes of the vigil held last Saturday at Clapham Common.

While there were no scenes like that today in Newcastle, the Monument was totally surrounded by police. When asked, they said that they were there to ensure people didn’t congregate. They did take the flowers and lay them at the Monument for us but, disappointingly, placards weren’t being accepted.

Sarah’s murder took place in London but we have taken it very much to heart here in the North East as she lived here for several years while studying at Durham University. Furthermore, this is not just a London-based problem, women fear for their safety everywhere in the UK.

Having lived in both London and the North East, I have had experiences of harassment in both when walking home. One was even in broad daylight when leaving work in Newcastle on a half-day for goodness sake. I nearly didn’t call the police that time as thankfully I managed to get away from the man in question but did so in the end as I didn’t want anyone else to experience this.

When I first moved to London I was given some advice that if I was ever followed home to shout “f off” at the top of your voice to startle the stranger in question, giving you enough time to run off.  I replied incredulously “don’t be ridiculous”. Guess what? I actually did have to use this tip and, luckily, that time it worked.

I ended up having to move out of that particular borough solely because the ten minute walk from the bus stop felt too risky at night. We are not talking about a secluded wooded area either; we are talking about a high street with houses nearby. It had started to ruin my nights out worrying about the journey back home.

The choice was a stark one: either stay in or move home so I chose the latter. I could go on and on with these stories, and ones from friends, but we simply do not have the space.

Of course these experiences are sadly far from unique. The placard I attempted to take to this event read “walking home = Russian roulette” and that is really how it feels to all women who walk back home alone, particularly at night time. The only difference between us and Sarah Everard is bloody good luck.  It really shouldn’t still be like this in 2021, it feels like nothing much has moved on much since the Yorkshire Ripper era. There is not one woman out there who has not had to endure some kind of street harassment. They may not always talk openly about it but, believe me, this really is the case.

We know this is only a very small minority of men – indeed most are absolutely appalled at hearing all these stories regarding female safety and are very much on our side. I have had plenty of very supportive experiences of men calling out other men’s behaviour. In my opinion, this is definitely part of the solution to start to turn things around to show certain behaviours are just not socially acceptable.

While I do believe there needs to be a law that makes street harassment a crime, legislation can only go so far about male violence against women, we also need cultural change.

A truly slippery slope: oil, freedom of press and the Polish media