As a proud Tyneside Irishman, I’ve been forced on several occasions to defend Irish whiskey (note the spelling) against the Scotch variant. 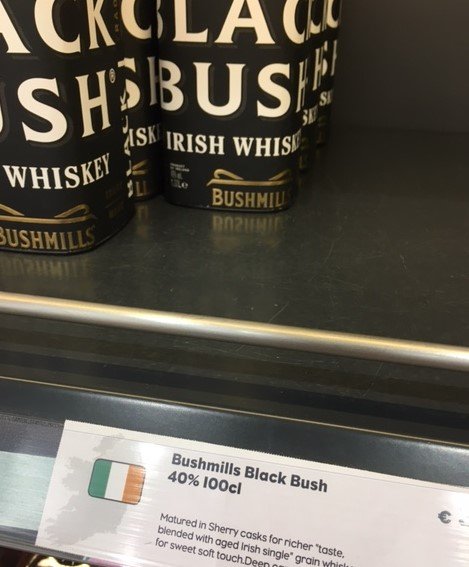 Irish whiskey but a Unionist heartland...represented by a tricolour! Photo by Bill Corcoran

I was in Malta last week. A surreal experience with a Mediterranean climate, English spoken, fish’n’chips (and mushy peas!!) in a posh café in Valletta. In conversations with the friendly Maltese, the prevailing words, uttered quietly, once the polite language about shared history, culture and friendship had been done – “but Brexit….”; as if referring to a family tragedy, emerged from the young and old. Clearly, they think we’re mad; and not in the good old Noel Coward way of defiant macho-midday sun exposure.

After the bureaucratic shock of having to fork out £50 for a ‘Day 2 Covid Test’ to be allowed back to Britain wore off, there I was, safely airside…waiting for the flight back to a joyful Ashleyless Newcastle, wandering around Duty Free.

‘Cos Duty-Free is back! The one advantage that I’ve seen is it’s cheaper for Brits in Duty Free than EU Citizens, or ‘Schengen Area’, as the marketing speak says. However, there are exceptions…The major one, as pointed out by the small print in the duty-free brochure is ‘citizens from Northern Ireland’. If you’re flying to Belfast, there’s no Duty-Free. None. You’re treated as EU.

As a proud Tyneside Irishman, I’ve been forced on several occasions to defend Irish whiskey (note the spelling) against the Scotch variant. In an artillery barracks in Gateshead in 2016, we’re nearing ‘the answer’ at 3.30am as the Tyneside Scottish and Tyneside Irish remnants pursued the solution, with a fiddle in the background, so I’m reasonably familiar with the damage that can be done by the ‘creature’ as my Scottish friends call it.

However, they’re only talking about booze-damage to livers, hangovers and Magistrates Courts, not the breakdown of civilisation.

There are many areas of dispute in Northern Ireland/Ireland; amongst the least horrendous are the “crisp wars” between Tayto (“Free Stayto”) crisps and the NI ones made in Tandragee. They are the bits of the Troubles we can laugh about a bit.

The Bushmills Whiskey, may have a mixed Protestant and (slight) Catholic heritage, but try explaining that to anyone who’s had half a bottle, on the 12th, on the Shankhill, (any more than pointing out that the Pope was on King Billy’s side at the Battle of the Boyne) and you might be counting your teeth on the floor. Jamesons from Cork City occupies the corresponding place in Irish boozing myth.

Seeing Bushmills Whiskey next to an Irish Tricolour in Valletta Duty- Free just might send a man of serious sectarianism into a furious rage, especially when it’s more expensive to take it “back home to Ulster” than to the Britain which acceded to an Irish Sea border so Boris could win an election (having guaranteed the free passage of Northern Tayto Crisps and everything else he said that wasn’t quite true).

So the many borders which face us in Ireland, natural, unnatural, bogus, fake, bureaucratic and legal are, as ever nothing without the self-made borders in the hearts of humankind. We had peace, not a great one, but tolerable; it meant that the army could come home, people could co-exist and there was hope for a better future.

Now we fear that our government will use the community divisions in Ireland as a negotiating tactic with the EU, and a campaign strategy to retain its English heartland. And to hell (or Connaught?) with the Irish on all sides.

If that tactic works, if they sell the most loyal – literally ‘the loyalists’ – supporters of the British Union out in exchange for a few years of power, there seems no hope for the stability of the United Kingdom. How we get anyone in Belfast, or Glasgow, or Liverpool or Newcastle to say nothing of Berlin, Paris or Brussels to trust Perfidious Albion again, I don’t know, but I suspect that it could be impossible.

At some point people stop trying to fix a broken system and look for alternatives. Maybe people will recover their affection for the values of a gentle England, that could coexist with settled identities within its British family? Or maybe we’ll get a machine gun line at a defended Carter Bar?

If people can argue about crisps and whiskey, and mean it; political economy and geography are easy. Farce becomes tragedy quite easily. Stupid arguments still hurt and countries can collapse because of them.

Wetherspoons' boss loses out because of Brexit