Nissan will build the electric car and battery factory. Good news. We should also know how much money is being given by the government. 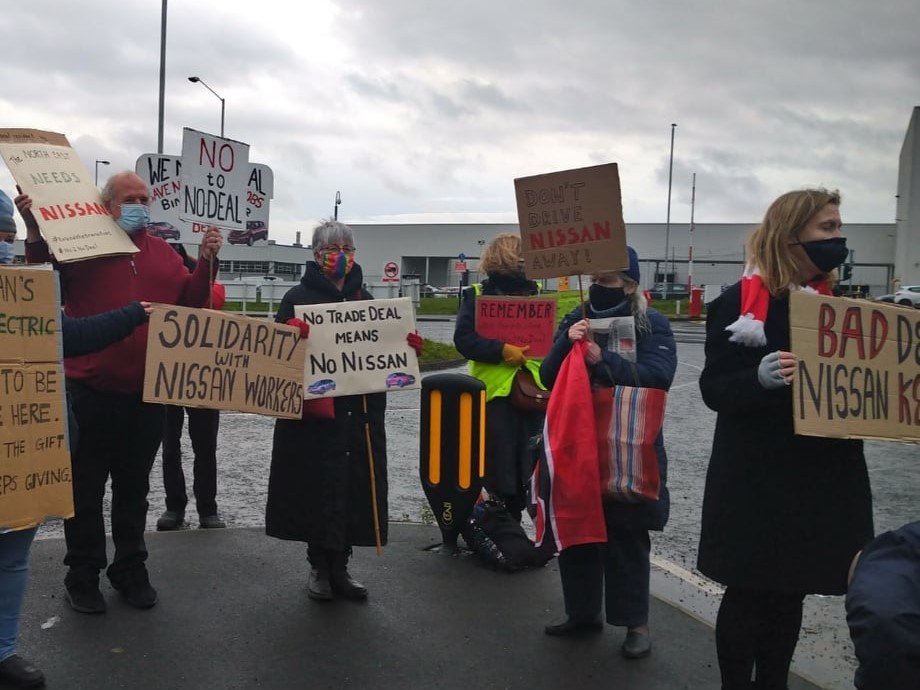 Solidarity with Nissan workers in 2020

I am the co-founder of North East for Europe (NE4EU) and today has been an interesting day on our Twitter account. Lots of comments about “I bet you are disappointed about the Nissan announcement today”. This is of course regarding the fact that Nissan have confirmed they are building a new electric model and battery plant in Sunderland. The plan is to produce batteries for electric vehicles in partnership with Envision AESC (which already has an outlet near the plant). This will create new jobs in Sunderland and in the supply chain. It will open in the next few years and is essential as sales of new petrol and diesel cars are to be phased out in the UK by 2030.

I know just how important Nissan is economically to Sunderland, having grown up from just around the corner from it. It has provided decent jobs to the area for over thirty years.  This is why I stood outside Nissan with other NE4EU members week after week last year often in the cold and pouring rain to stand in solidarity with its workers.

It is now very easy to forget the repeated warnings given by Nissan themselves about how their plant was not sustainable if they didn’t get a good Brexit trade deal. This was still being said just before the deal was announced on Christmas Eve last year.

Our protests echoed their own CEO’s words of the Sunderland plant and jobs being in real danger.  We stood there often at shift change to hundreds of honks of support from Nissan workers who told us they were extremely worried about losing their jobs.

Taking the protest to Westminster

We also took our protest to Westminster to bring a higher profile to the campaign, funding the expensive journey ourselves. I even got to talk to Steve Baker, MP about our concerns outside the Houses of Parliament. Some of our protests made the national press with sympathetic articles written even by the tabloids who were equally as concerned about the factory’s future.  All of this, of course, will be quickly forgotten after today’s news which can be seen by the comments on our social media page today. I am unsure why others may think we wanted Nissan to close when we come from the region and have dedicated many hours to supporting its future.

“I am thrilled with Nissan’s announcements, which have the potential to transform car-making in the UK.

“I have been working with Nissan to call on the Government to invest locally in the Nissan supply chain.

“The Sunderland plant is the jewel in the crown not only for Nissan but for our region’s economy, with local jobs and a local supply chain we in the North East benefit most.

“This announcement is also testament to Sunderland City Council’s dedication to becoming a city of the future, providing green energy, green jobs and green investment.”

Boris Johnson visited the plant today and will undoubtedly want to use it as an example of an apparent Brexit success. The Prime Minister has declined to say how much financial support the government has given to Nissan but it is rumoured to be £100 million. It is just a shame the government isn’t throwing huge amounts of money to all the other businesses that are currently failing because of Brexit red tape.

UK food and drink exports alone to the EU have almost halved since Brexit began in earnest at the beginning of the year. The North East England Chamber of Commerce carried out a survey recently that stated 75% of respondents have said that the UK’s withdrawal from the EU has had either a negative or very negative impact on their companies.

Therefore, although I am indeed very happy at Nissan’s announcement of new jobs today, there is nothing to celebrate for many of our other local businesses.