The North is experiencing the effects of the deep Brexit divisions and shows how the division will harm the whole community creating a permanent underclass. 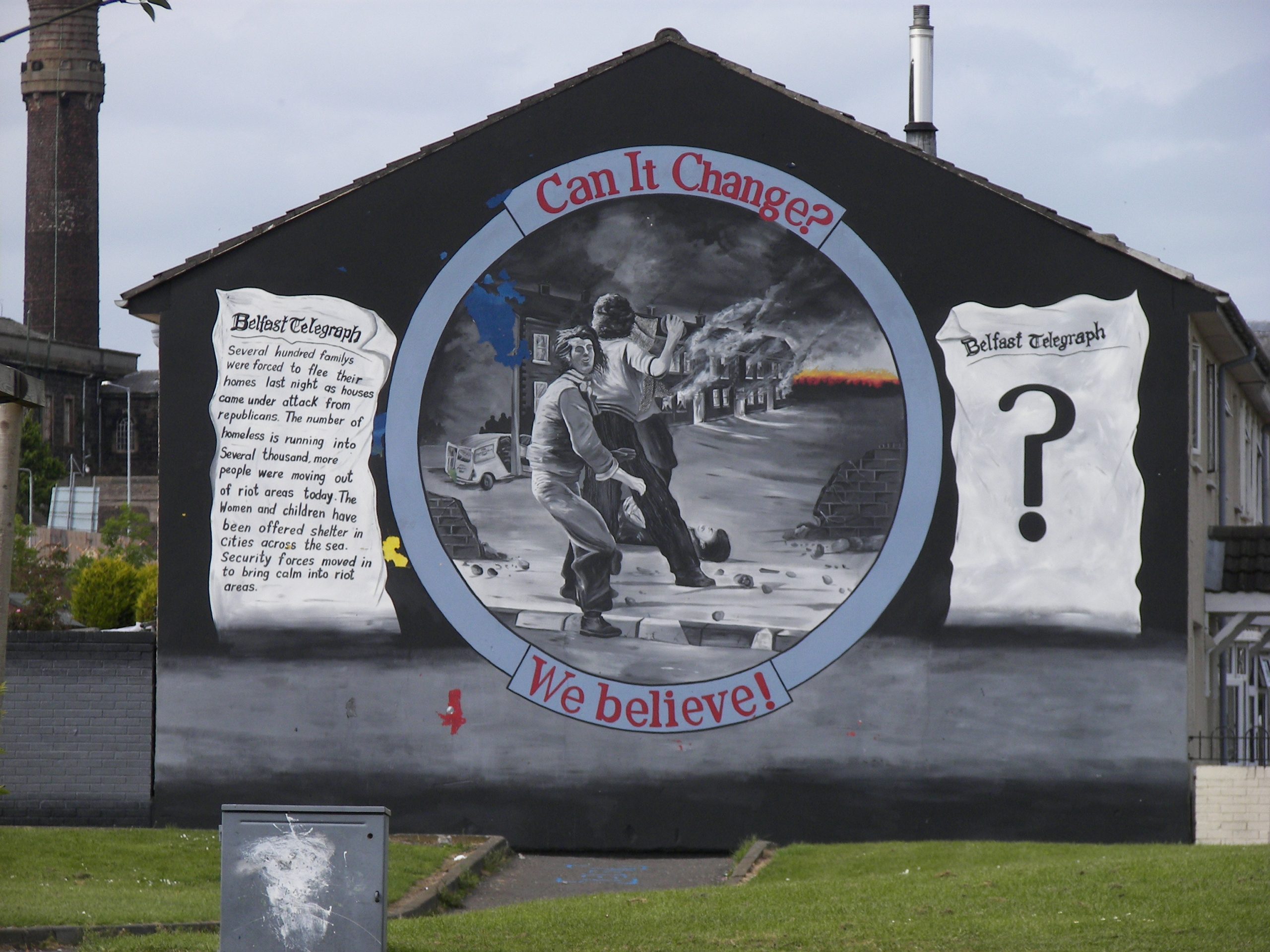 A loyalist mural in Belfast Photo by Wknight94 CC BY-SA 3.0

The North East and Northern Ireland (NI) share decades of neglect starkly demonstrated by losing ship building and heavy industry. The resulting damage to working class communities has been accelerated in NI by deep divisions that hamper progress.

NI was specifically established to create a separation between Nationalists and Loyalists. In the 1920’s significant numbers of battle-hardened WW1 soldiers returned to both communities and bloody civil war looked likely. Segregation entrenched by the land border became the established norm in the north. Discrimination was inevitable if the loyalist voting majority was to be sustained in perpetuity. This history of division has come to rest most heavily on poor neighbourhoods and on boys within those communities. Surprisingly, those more loyal to discriminatory politicians may come to suffer most.

The newly created NI state penned nationalists in overcrowded ghettos with very poor housing and few jobs. Overcrowding was a direct result of gerrymandering of local and central electoral areas. Emigration was inevitable and the loss of the more able further impoverished these communities. Loyalist areas had opportunities for employment and housing, but their areas also suffered from state neglect. Pressure for improvement from either side of the divide was easily stymied by unscrupulous politicians reframing it as a sectarian plot.

Progress was hardly visible until the end of the 60’s. The Civil Rights reform movement arose from the nationalist communities but tried to avoid the twin traps of sectarianism and militarism. Their demands were simple, pressing, and achievable within the existing State, albeit with implications for some of its mechanisms. Demands for fairer voting, better housing, more jobs, and equitable policing were readily understood. They would eventually succeed though delayed and limited by harsh government counter measures and the Troubles they provoked.

New civil rights, though welcome, could not address the basic flaw in the segregated state. Increasingly civil rights were deliberately associated with militant republicanism. Liberal Protestants who joined the movement withdrew or were driven out by co-religionists. Segregation continued and advances were often perceived as unfair to one side or the other. However the balance of forces was changed forever toward greater equality, threatening the segregationist basis of the state.

Whilst desperately poor housing has been improved by the non-sectarian Housing Executive (1971) it could not develop an integrated approach to housing because of the fear of resurgent inter community violence. Segregation had if anything increased, with the allocation to housing schemes at the centre of inter community political violence that engulfed Northern Ireland from 1969. Massive shifts of people into Balkanised housing estates were accompanied by the destruction of previously integrated neighbourhoods. Paramilitary organisations were able to exercise total control with no go areas for law enforcement. They recruited youths readily, offering status, guns, cars, and money to boys facing uncertain futures.

The divided communities followed different paths after the Good Friday Agreement. The IRA opted for politics and disarmed, bar a rump of dissidents in remoter areas. Their communities always valued education and new opportunities were readily seized on. Loyalists were less fortunate as competition for ‘their’ state jobs increased and the automatic right to follow fathers into the shipyards vanished. The Ulster Defence Association and Ulster Volunteer Force had never recruited educated protestants and struggled to find a foothold in Stormont politics as a result. Gangsterism increased among them. While their activities are often ignored in the UK media, they are nevertheless a continuing problem for law enforcement and an obstacle to development in their communities.

Women in NI had also experienced a change for the better through equalities legislation. They lost low wage shirt and textile jobs but gained opportunities for state and community jobs. In this way, nationalists and women countered their experience of sectarian and sex-based discrimination. The hierarchy of educational attainment demonstrates this differential. Protestant working class boys perform less well educationally than any other group. In a job market that emphasises qualification and social mobility, it is easy to see why these left behind youths are easy prey for recruitment as paramilitaries or gangsters.

As in the North East, NI has to make a huge shift away from arrangements that depended on the EU’s legal and financial input. The subsidiarity policy allowed progress within segregated communities, delivered by developing strong community organisations that cut their teeth during the Troubles. A small number of highly valued community leaders remain as a legacy. They are sources of credible factual information. They work directly with their people creating and identifying educational and job opportunities. They have the ear of politicians and civil servants and can influence decisions that affect their community. They are able to offer a measure of protection to local start-ups and to negotiate contacts with the outside world including cross community initiatives that had seemed impossible previously. Alas their work is undervalued by a government fixated on borders and centralised control.

The North East, together with most of England, is experiencing the effects of the deep Brexit divisions. The NI example demonstrates how the division will harm the whole community creating a permanent underclass. With Westminster carrying huge debts, building up from local initiatives seems the best way forward for neglected communities. What is required (at least) is a devolved structure of decision making that delivers education and employment relevant to local needs.

There is a natural energy and vibrancy in Northern Ireland’s poorest neighbourhoods. EU interventions recognised that and sought to strengthen it. It remains to be seen what the future holds for them in an increasingly divided United Kingdom.