There are much kinder, more sympathetic ways of dealing with what is essentially a humanitarian issue. 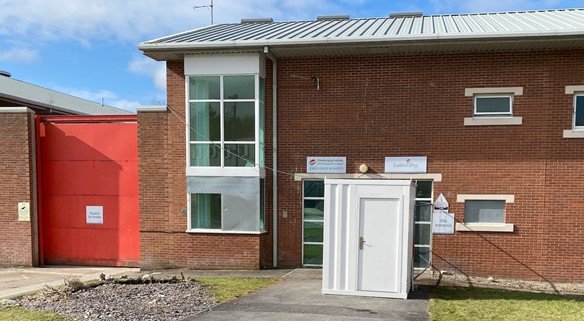 On 29 January a small group of human rights campaigners gathered online for the first time to discuss the worrying developments on the site of the notorious former Medomsley Detention Centre near Consett. The Home Office had announced it was planning to build a category 3 prison (or Immigration Removal Centre, IRC) to house ‘failed’ women asylum seekers.

In less than four months the No To Hassockfield campaign has grown enormously with a Facebook group comprising over 600 concerned citizens from across the UK. This includes support from academics, legal experts, health professionals and leading parliamentarians in both the Commons and the Lords.

A focus on Human Rights

The campaign is apolitical with a laser focus on Human Rights. An early meeting with former child refugee Lord Alf Dubs in March helped strengthen the group’s resolve to do everything possible to try and stop the development. In terms of parliamentary activity, we have been very successful in gaining answers to Parliamentary Questions, written and verbal, in both Houses of Parliament. Each of these questions appears to have received the stock ministerial reply of “strong borders”, but very little has been forthcoming in the way of detail.

Work on the site

Fiona Ranson, a local expert and PhD candidate looking into ‘best interest’ provision for unaccompanied asylum-seeking children, led an in-depth forensic training session on the government’s sham consultation on  the New Plan for Immigration. A significant number of people who attended this session subsequently submitted detailed critical responses whilst managing to avoid falling into the trap of answering the multiple choice questions which were designed to give the impression that respondents would be in support of the proposals.

Closing at 11:45am on 6 May, the government had hoped to include the majority of their proposals in the Queen’s Speech on 11 May. However, given the number of responses there was only a brief mention in the  speech itself as follows, “Measures will be brought forward to establish a fairer immigration system that strengthens the United Kingdom’s borders and deters criminals who facilitate dangerous and illegal journeys [New Plan for Immigration Legislation]”.

So, not quite the overarching legal framework that had previously  been promised. But we must continue to be vigilant.

Support for the campaign

Our campaign has also been gaining more and more support, not just in the North East but from across the United Kingdom and wider Europe. From the Jewish Human Rights Charity René Cassin to the Roman Catholic Diocese of Hexham and Newcastle, there is a real spirit of collective working between and across faiths. René Cassin even got questions around Hassockfield into the London mayoral hustings, with all candidates being quizzed. Hexham and Newcastle’s Justice and Peace Forum have been organising across the diocese, with various events having already taken place and a prayer vigil planned for later this month.

As we continue to push our Human Rights message, and work to ensure that the Hassockfield IRC doesn’t open, the responses from those who support the plan for the site have become ever more desperate. The number of putative jobs has been inflated, along with unfounded investment figures, presumably to fit a particular narrative. However, what is most worrying is the number of mistruths promulgated by supporters of the scheme.

Appearing on BBC Radio Newcastle last Friday and BBC Politics North on Sunday, former MEP Julie Ward put forward alternative humane options for accommodating asylum seekers or those who are about to be deported, as recommended by the Council of Europe.

“Some of the alternatives to detention are much more human scale, they include, for example, family accommodation, small group homes, regular reporting and temporary residence. Much kinder, more sympathetic ways of dealing with what is essentially a humanitarian issue.”

Mary Foy, Labour MP for the City of Durham says:

“Hassockfield Immigration Removal Centre will allow the government to effectively imprison 80 vulnerable  women at a site with an appalling history of abuse, despite genuine alternatives to detention existing that actually support the women involved, while also being more efficient cost-effective.

Rather than seeking to extend their hostile environment policy to a small community hundreds of miles away  from Westminster, the government should focus on creating an asylum system that treats people with the compassion and care that they both need and deserve. This starts with scrapping the plans for this abhorrent detention centre.”

Some of the mistruths are being given not just by the sitting Conservative MP for North West Durham, Richard Holden, but also by supposedly ‘independent’ councillors for Leadgate and Medomsley. Prime among these is the idea that Hassockfield will house so-called ‘criminals’. However, if someone comes here legally or illegally and is then convicted of a crime they have committed in the UK they are dealt with by the Criminal Justice System, not the Immigration System, and are liable to deportation without warning from the Prison Estate.

Apparently, good quality, full-time jobs will be offered at the site for local people, but the only full time job to be advertised so far by Mitie is the Centre Manager’s job. It is more than likely that the other jobs on offer  will be ‘zero hour contracts’, with people being employed from outside the area due to the specialist nature of the work.

Perhaps the most extraordinary claims made by Holden is that everyone supporting our campaign is against detention in general and that we are all “opposition activists”. However, nothing could be further from the truth – not least because if someone has been convicted of a crime they should be housed accordingly.

Hassockfield will be used on the other hand to house vulnerable women asylum seekers, possibly even men and children too. (There has been no clarity on this from the Home Office.) They will most likely be held indefinitely. Indeed, we are the only country in the Council of Europe to have no time limit on detention.

The joy of being a cross-party, interfaith and positive campaign, is that opposition to Hassockfield comes from the widest possible spectrum of society – locally, regionally, nationally and internationally. We stand united against the IRC, on a Human Rights basis and we remain truth tellers. A testament of our broad-based support is the letter sent to the Home Secretary that we co-authored with Women for Refugee Women, signed by over 200 people – local politicians, NGOs, faith groups and many others besides. We were particularly heartened to see that Neil Tennant (The Pet Shop Boys), Rabbi Sybil Sheridan (Newcastle Reform Synagogue) and Peter Flannery (scriptwriter of Our Friends in the North) all added their signatures.

As Alf Dubs said: “No one is illegal!”

You can find details on the campaign here and on twitter.

Children's rights: do we care?