¡No pasarán! means 'they shall not pass' 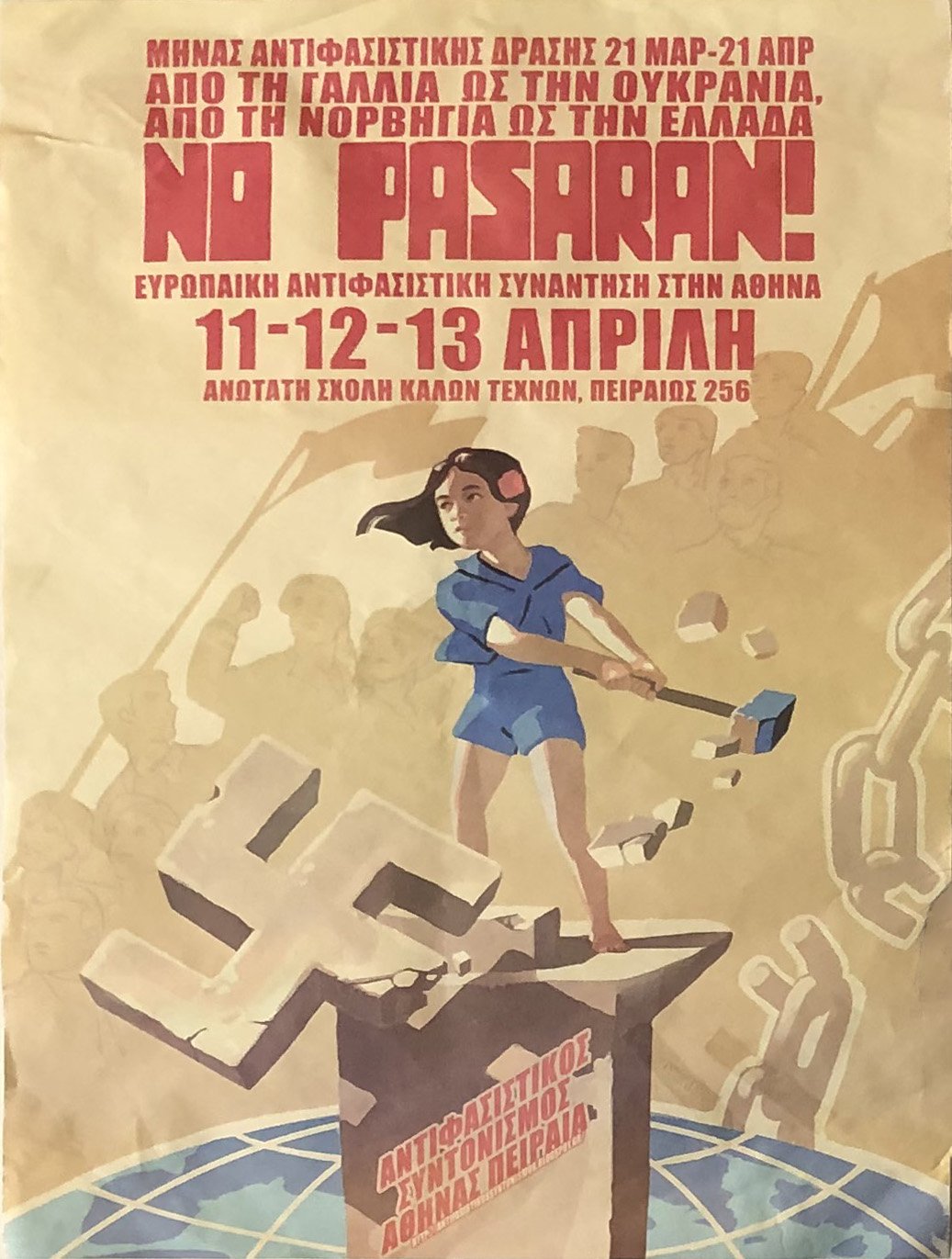 I visited Athens several times in the summer of 2019 as part of Greek Solidarity missions. On one occasion I was introduced to Magda Fyssas, the mother of the murdered left-wing rapper Pavlos Fyssas, otherwise known as Killah P (loosely translated as killer of the past). Magda was tired. Ever since her son had been stabbed by Giorgos Roupakias, a member of the neo-Nazi Golden Dawn party, on September 18th 2013, Magda had focused all her energy on the struggle for truth and justice, determined to use her son’s murder as a test for the soul of her country. But the years of waiting for investigations to be completed, the inertia of the police, long hours spent in court reliving events leading up to her son’s brutal murder, endless adjournments and interruptions all took their toll. Increasingly, Magda found herself sitting virtually alone in the court bearing witness to the slow progress of the Greek judicial system.

However, on October 7th, Magda’s long wait was rewarded when the Greek court finally found Roupakias guilty of Pavlos’ murder and convicted 15 other Golden Dawn members of conspiracy in the crime. Roupakias, who had worked in the cafeteria of Golden Dawn offices, had previously confessed to a judge his part in the murder. He was given a life sentence on October 13th.

The Greek court also found party leader Nikos Michaloliakos and six former MP colleagues guilty of heading Golden Dawn which they deemed to be a criminal organisation, handing out sentences of 13 years apiece. One of those convicted is Ioannis Lagos, a Member of the European Parliament since 2019. Eleven other former MPs were jailed for between five and seven years for being members of Golden Dawn.

In total more than 500 years behind bars was handed down by the tribunal to 57 defendants. It is a landmark decision at a time when the far-right is on the rise across the world and gives hope to anti-fascist campaigners everywhere.

The court, which almost unanimously dismissed pleas for leniency, went into recess following the announcement to deliberate on whether the sentences would be suspended pending appeal. Defence lawyers had argued during the marathon legal proceedings for sentences to be reduced, citing their clients’ good behaviour, honourable family lives and even their love of animals.

Thanasis Kampagiannis, a lawyer who represented four Egyptian fishermen brutally attacked by Golden Dawn supporters, said it was “critical for the vindication of the victims” and how the trial would ultimately be assessed that the sentences should not be suspended.

Golden Dawn was an overtly anti-EU, anti-immigrant, homophobic, racist party founded in 1985 and gaining support year on year with a populist agenda, finally entering the Hellenic parliament in 2012 on 7% of the national vote winning 21 seats. Supporters march behind flags reminiscent of the swastika, and photos of Nikos Michaloliakos show him giving Nazi salutes.

Golden Dawn members participated in the Bosnian War in the Greek Volunteer Guard. A few GVG volunteers were present in Srebrenica during the massacre, and they raised a Greek flag at a ruined church after the fall of the town. Golden Dawn members in the GVG were even decorated by Radovan Karadžić. The party has close links with British fascists including the BNP, and former BNP leader Nick Griffin was often seen in the European Parliament, even after I beat him at the ballot box in 2014, as he returned to meet up with Golden Dawn and other extreme right-wing politicians.

In the long-running murder trial to ascertain who killed Pavlos Fyssas, the chief prosecutor Adamantia Economou provoked uproar last December, with a call for Golden Dawn party officials to be cleared, arguing there was no evidence they had any part in planning or carrying out the series of attacks. Such attempts to whitewash the neo-Nazi party have incensed a large majority of Greeks for whom the Nazi occupation during the second World War is still a painful period in recent history, resulting in a million or more deaths from hunger, malnutrition, forced evictions through the wholesale burning of villages, torture, execution, and deportations to death camps.

As well as meeting Magda Fyssas in summer 2019 I was introduced to the surviving daughters of Apostolos Santas, one of the two Greek national heroes who tore down the Nazi flag from the Acropolis in the middle of the night on May 30th 1941. The other young partisan was Manolis Glezos who was briefly a MEP for a year from July 2014 during which time he served alongside me on the Committee for Culture and Education.

Culture plays a big part in the story of Pavlos Fyssas, from his work as a political hip-hop artist to the numerous murals and images created in his memory, and even the investigations into his death. Forensic Architecture, a team of investigators, coders, architects, lawyers, animators and filmmakers based at Goldsmiths University, who do spatial and media analysis of crime scenes won the 2018 European Cultural Foundation Princess Margriet Award for their innovative digital methods to investigate a number of complex and sensitive cases, including the killing of Fyssas. The collective was commissioned by the Fyssas family and the BAK, a platform dedicated to researching, producing, analyzing and exhibiting contemporary art, based in Utrecht.

Using synchronisation, image complexity and audio analysis gathered from mobile phones and CCTV cameras Forensic Architecure established that members of Golden Dawn, including some of the group’s most senior officials, acted in a coordinated manner in relation to the murder, and that members of Greece’s elite special forces police, known as DIAS, were present at the scene before, during and after the murder, and failed to intervene.

Here in the UK we have our own painful memories of far-right violence. Jo Cox, the pro-European Labour MP for Batley and Spen was murdered outside a library a week before the EU referendum in June 2016 by a man shouting “Britain First”. The police investigating the murder found a stack of Nazi memorabilia and far-right material in Thomas Mair‘s house, much of it purchased from the white supremacist National Alliance based in Hillsboro, West Virginia.

Golden Dawn may now be defunct, criminalised out of existence, but one of their convicted MPs, Ilias Kasidiaris, had already founded a new party called Greeks for the Fatherland. Closer to home, the BNP may have got rid of Nick Griffin but disgraced former teacher Adam Walker, from Bishop Auckland, is still exhorting people to sign up to join him and other BNP members in the fight against the Islamification of Britain and other perceived multicultural ills.

Aside from his role as current Chairman of the BNP Walker is apparently still connected to the Chikara Dojo Kyokushin Karate Club in Spennymoor where he appears in photos on their website alongside unsuspecting boys and girls. The loss of a properly funded youth service has much to answer for in areas like County Durham where privately run sports and activity clubs are not subject to rigorous screening.

Meanwhile, a few miles down the road in Bishop Auckland newly elected Conservative MP Dehenna Davison was snapped having a drink and a laugh with known far-right activists in the Merry Monk pub on the evening of January 31st.

And in the neighbouring constituency of North West Durham (where I live) Richard Holden’s newsletters to constituents bear the imprint “Promoted by David Baggett”. Is this the same man who was kicked out of the Conservative Party and joined UKIP, subsequently found commenting on a post in Kipper Central: “I joined UKIP because I met Gerard Batten at a Bruges Group Meeting and instantly respected him as a patriot…” (July 22nd 2019). Anyone familiar with Batten’s divisive, misogynistic and Islamophobic rhetoric should worry if this kind of influence has infiltrated the mainstream of the Conservative Party machine.

A looming post-pandemic recession exacerbated by Brexit, with millions on the dole unable to pay the bills present the perfect conditions for people like Walker and Batten to peddle their fearmongering. We need to look both ways at once – inwards to addressing the poverty and inequality in our communities and outwards to create bonds of solidarity and resistance with anti-fascist campaigners around the world.

<ed.> ¡No pasarán! means ‘they shall not pass’ – used by Republican troops (left-wing soldiers) in the Spanish Civil War of the 1930s. It has been a rallying cry (in various languages) against fascists around the world ever since.

The children of Albion