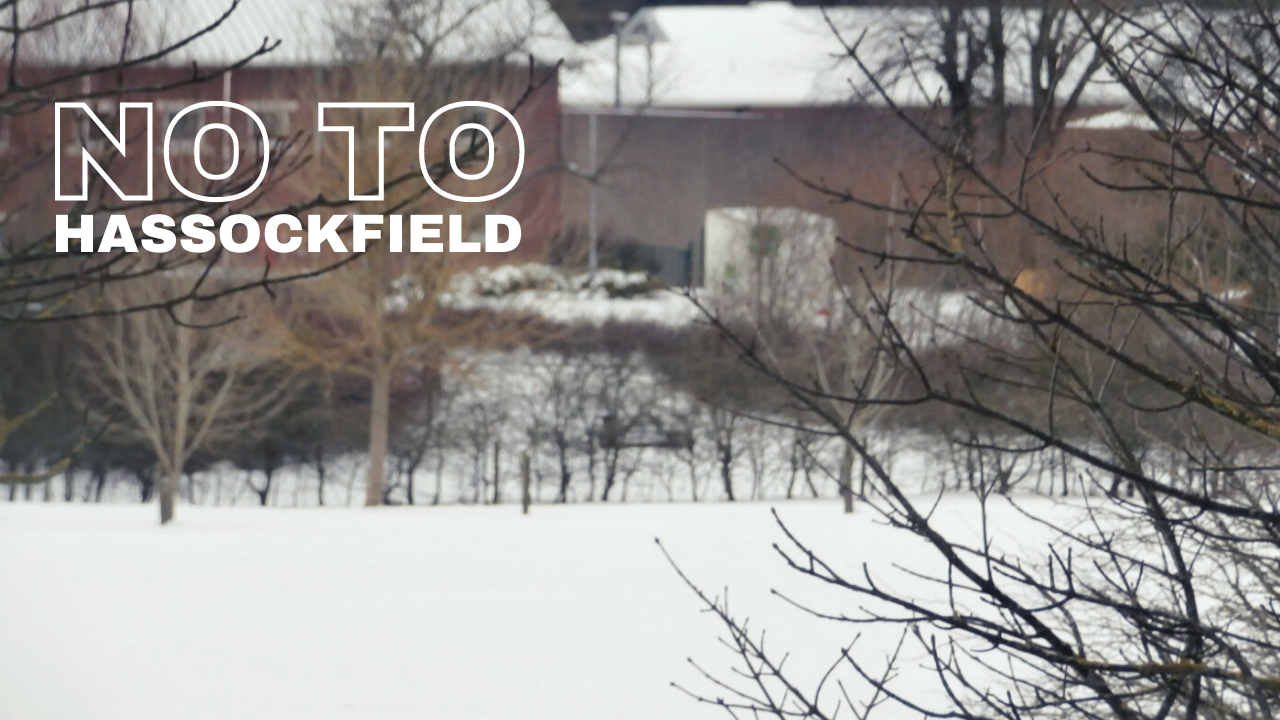 No to Hassockfield Photo used with permission

The hashtag for this year’s International Women’s Day on 8 March is #ChooseToChallenge. This hashtag is also behind the rallying cry of a new campaign #NoToHassockfield which has been established in response to the announcement by the Home Office of the creation of an Immigration Detention and Removal Centre on the site of the notorious Medomsley Detention Centre near Consett where the government hopes to house approximately 80 women asylum seekers later this year.

The #NoToHassockfield and many other campaign groups believe that the repugnant practice of indefinite detention is against international norms. The UK is the only European country to incarcerate people seeking asylum in this way with no time limit, meaning that people subjected to the inhumane practice can face months, if not years, imprisoned in a limbo-like existence with serious negative effects on mental health and well-being, exacerbating existing trauma.

In a recent report on’effective alternatives to detention in the context of migration’the Council of Europe suggested that “the wide use of immigration detention as a response to the arrivals of refugees, asylum seekers and migrants raises serious issues of compliance with human rights standards.”

Furthermore, the Committee of Ministers maintained that “detention of asylum seekers should be the exception”. According to the Commissioner for Human Rights, asylum seekers should, in principle, not be detained and alternatives should always be sought. The report clearly lays out a raft of alternatives, taking into account the specificities of ‘extreme vulnerability (including gender-based factors) and cost effectiveness. As a member of the Council of Europe it is shameful that the UK has chosen to largely ignore the recommendations of the report, choosing instead to double down on its hardline nativist response to the global refugee and migration crisis.

The local Conservative MP for North West Durham, Richard Holden, has welcomed the announcement of the new facility at Hassockfield, trumpeting the initiative as a job creation programme which will apparently bring millions of pounds into the local economy, inflating figures at each press opportunity, and provoking considerable racism on his Facebook page through his description of asylum seekers as criminals and illegals. Holden’s dubious economic claims fail to recognise a number of serious factors provoked by the development at Hassockfield ranging from planning issues and a lack of local scrutiny to the historic sexual abuse of former inmates of the Medomsley Detention Centre and the high levels of suicide that occurred whilst the centre was operational. Deep emotional scars remain for the survivors and victims’ families and the development risks re-opening old wounds as well as tainting any new prison facility with the horrors of the past.

Notwithstanding the UK’s flouting of COE recommendations, the local area would be much better served by the housing and leisure development which had been planned for the site, along with a sensitive memorial for those who suffered at the hands of the state within the perimeter fence of the Medomsley Detention Centre.

The change of use from a correctional centre for boys to a Category 3 type secure unit for women in the asylum system ignores the well-documented evidence that women refugees and asylum seekers are particularly vulnerable to abuse and sexual violence at every stage of their asylum journey from the moment they flee right through to their treatment by officials in the country of arrival. Gender-based violence takes many forms and includes socio-cultural practices such as FGM, forced and early marriage as well as trafficking, modern slavery, and rape as a weapon of war. Arriving in so-called ‘safe countries’ women are often also subjected to inappropriate and insensitive behaviour by border officials.

A comprehensive report by the Women’s Rights and Gender Equality Committee of the European Parliament on The Situation of Women Refugees, authored by Labour MEP Mary Honeyball, and presented in plenary in March 2016,  clearly laid out the gender-sensitive aspects which all EU Member States should adopt as best practice when dealing with women seeking sanctuary. Needless to say, even then the UK was not in the same league as Germany which was promoting a positive welcome to people fleeing violence and persecution.

Honeyball’s report stresses the need to avoid hasty decisions which do not take due account of the dangers, even the threat of death, facing women who have suffered gender-based violence if their asylum application is rejected and they are forced to return to their own country.

The #NoToHassockfield campaign has been working with other campaigns and civil society groups such as Freedom From Torture, and the Yarls Wood Befrienders, as well as medical doctors, legal experts, faith leaders and people with lived experience of seeking asylum. At a recent #NoToHassockfield meeting Agnes Tonah from the charity Women For Refugee Women, gave a moving and distressing personal testimony. Agnes was previously detained at Yarls Wood and still suffers psychological trauma as a result. She has now started a petition to gather support to stop the new IRC at Medomsley.

International Women’s Day (IWD) on 8 March generally focuses on celebrating women’s achievements in public life – stories of success against the odds in a male-dominated world, which cut across the political divide. Indeed, who can forget Theresa May sporting a T shirt bearing the slogan “This is what a feminist looks like”? But it is May’s ‘hostile environment’ which has led us to where we are now with a new incumbent in the Home Office hell-bent on a hardline approach, eschewing human rights norms in the determination to get tough on immigration, even when this represents a U-turn in respect of stated government policy, and most certainly puts women’s safety at risk.

The #NoToHassockfield campaign group is therefore promoting a social media campaign as part of International Women’s Day with a twitter storm planned for 4-8pm on Monday 8 March. To find out more check out the group’s Facebook and Twitter and add your voice with the hashtags #ChooseToChallenge #IWD2021 #SetHerFree #NoToHassockfield