Campaigner, Steve Bray. is determined to carry on protesting despite new policing law 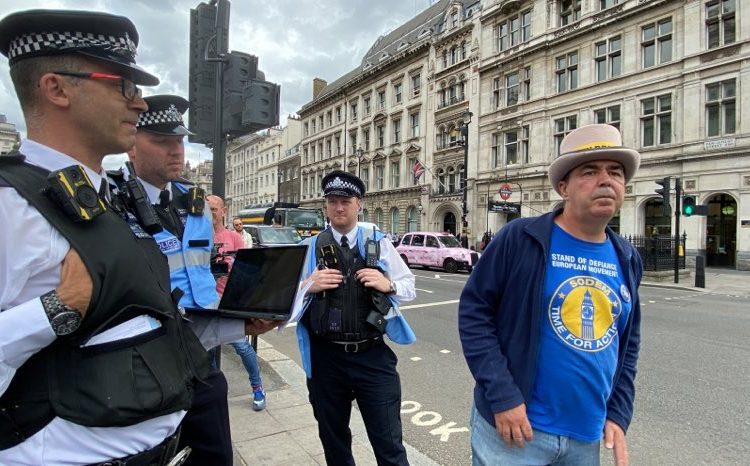 This morning, activist, Steve Bray was warned by police at Westminster not to bring his usual sound equipment to his protest outside parliament. This is because today is the day when the new Policing Act comes into force. He now has a court summons.

To give the Act its proper title, the Police, Crime and Sentencing Act 2022, amongst a range of other things, gives the police new powers to place new conditions on protests in England and Wales, in particular in relation to “noisy protest”.

Campaigner, Steve Bray, often known as “Mr Stop Brexit”, has been an active presence outside parliament for six years. His group SODEM (Stand of Defiance European Movement) protested against Brexit for many years. Whilst the focus now is still pro-European, the group has widened its scope to campaign on a range of issues, including against government scandal and dishonesty, for example Partygate and the changes to the Northern Ireland Protocol.

There have, understandably been serious concerns from campaigning groups in recent months about maintaining the right to protest. The government’s factsheet on this aspect of the Act states:

“This measure has nothing to do with the content of the noise generated by a protest, just the level of the noise. Protests by their nature often raise difficult and controversial issues faced by our society, and we fully support the right of individuals to express their feelings and concerns about such issues.”

Police officers told Steve Bray this morning that he was not allowed to bring sound equipment and that there could be a large fine for doing so, as well as the risk of the equipment being confiscated. Steve has responded that he was told by a different officer only yesterday that it was fine to continue as before. He also emphasised that protesting is a basic human right.

Steve says that he is being harassed by the police today but that he will continue to protest.

Updated: 12:55 Steve Bray reports that his amps and microphone have been seized.

"They might as well have called it the Steve Bray law": huge support for Mr Stop Brexit