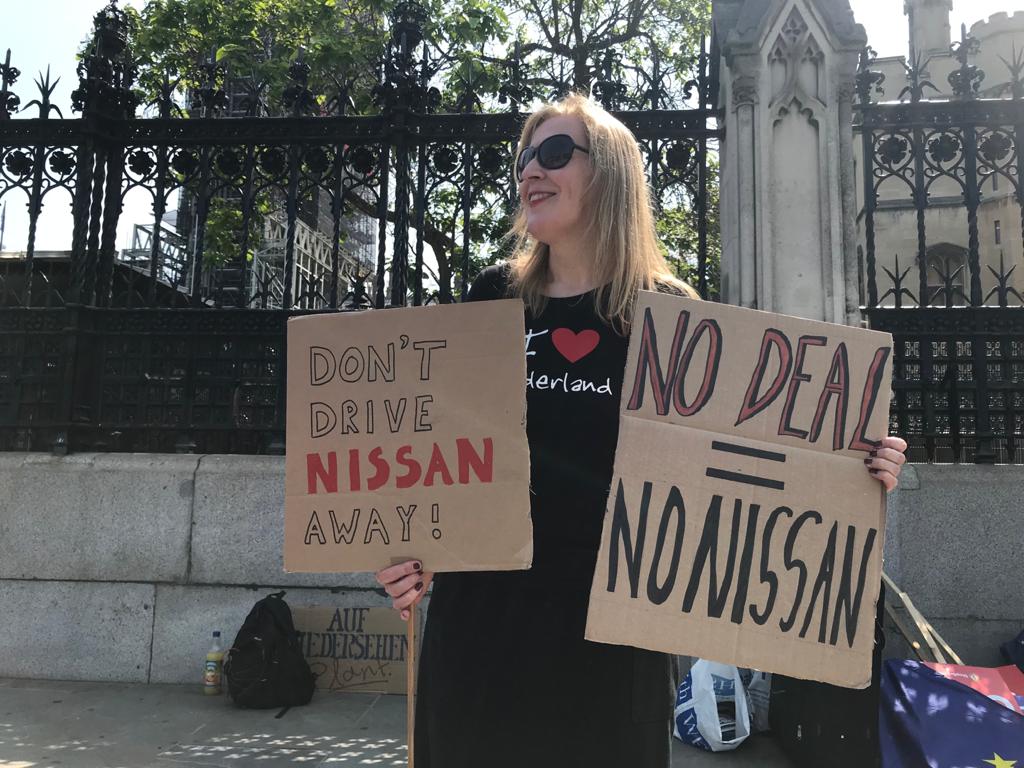 Sunderland Campaigner outside Parliament fighting to protect Nissan Jobs from a No Deal Brexit. Photo by Peter Benson

The stark reality of the consequences of a No Deal Brexit was laid bare by demonstrators from the North East, who took their message to the gates of Parliament on a sweltering Wednesday 24 June, as MPs gathered for Prime Minister’s questions.

The revived threat of a No Deal scenario between the UK and the EU would be a catastrophic blow to the North East, with government figures estimating a 16 per cent contraction in the region’s economy, said a committed group of campaigners that travelled from Newcastle-upon-Tyne to London on the hottest day of the year to give their region a voice at the heart of power in Westminster.

Nissan, the region’s largest employer, has said a No Deal Brexit would threaten the viability of its Sunderland car plant, costing thousands of jobs directly and many more in the supply chains, the demonstrators said, displaying their own home-made banners with “No Deal = No Nissan”, “Don’t Drive Nissan Away”, and “Auf Wiedersehen Plant” banners outside Parliament, to great interest from assembled media.

The spokesperson, Louise Brown, who grew up near to the plant, said this was a huge fight for them all: “As many will have read in the media, the boss of Nissan has said the plant in Sunderland may not be sustainable in the event of a No deal Brexit,” she said, continuing: “None of us want any member of our family, friends or the wider community to lose their jobs . Whichever way you voted in the EU referendum, it was probably not for this scenario. In the middle of a pandemic and economic and jobs crisis, it is utter madness not to extend the transition to prevent such a no-deal scenario.”

“The people of the North East remember the Depression, and the days of mass unemployment when the pits were closed.  We are fighting for ourselves, our families, our friends and the wider community – our voice must be heard.”

Fellow protestor, Peter Benson, spoke about the wider impact of a No Deal Brexit on the national economy, with industries ranging from car making and transportation to farming and chemical engineering all being heavily impacted. Many commentators are forecasting chaos at the ports as trade will no longer be frictionless and the importation of essential medicines could be disrupted.

Michael Gove, Minister for the Cabinet Office, recently admitted that food prices are likely to rise in the event of a No Deal Brexit.

“A 16 per cent collapse in the North East’s economy is like ten Nissan plants closing.  With that prospect looming at the end of the year when the national and local economy will be in a very weak state, it’s total madness to plunge the UK into a very deep and extended recession,” Mr Benson said.

He added that the health and wellbeing of a nation is the government’s priority and this government must redress its palpable failings in handling the pandemic and preventing any second wave, instead of leveraging the pandemic into some kind of twisted negotiation point. “The Brexit talks must be paused till the pandemic passes and the full health and economic consequences are known.”

The North East group have been active across the country in recent days, demonstrating at the iconic Angel of the North, in both Newcastle and Hexham, and outside the Nissan plant itself, with more local protests planned.