One could argue, that just like ‘North of Tyne’, Northumbria just describes a place in relation to another. 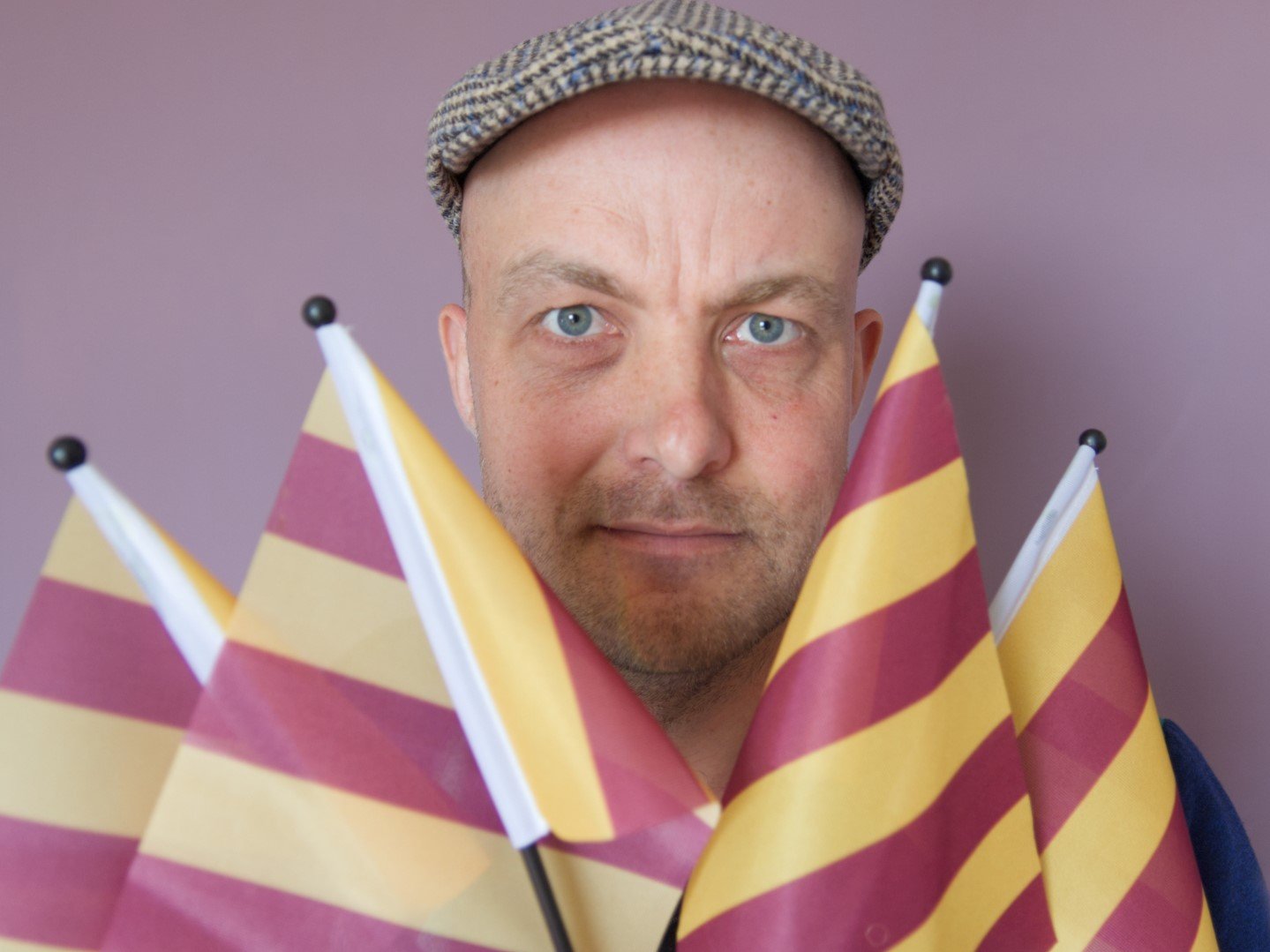 Photo by Will Sadler

As a resident of the recently-created ‘North of Tyne’ combined authority, I like Mayor Jamie Driscoll’s weekly 60-second video updates. However, there is one thing about them that really irritates me, albeit in that ‘seriously-this-genuinely-irritates-you-maybe-you-should-go-see-someone-about-that?’ kind of a way.

Before I go any further, I should say that I tend to agree with the argument that flags are more trouble than they are worth. Allow me to use my somewhat disproportionate reaction to a couple of flags that sit innocently in the background of many of Jamie Driscoll’s videos, to demonstrate to you why this is indeed the case.

The one on the right is the Union flag. Fair dos. Our union may currently be swinging off the edge of a cliff by its fingertips, but it does still exist, technically at least.

The one on the left however, is the Northumberland flag. “Oh!” I hear you cry. “Surely you mean the Northumbrian flag?” “NO!” I retort, at a volume that makes a bustling café descend from a humming murmur into a sudden awkward hush.

By displaying the Northumberland flag, Jamie Driscoll is only representing one of the three local government areas that make up his patch of North of Tyne.

Northumberland is part of Northumbria, which according to the Cambridge English Dictionary, covers an even larger area incorporating the whole of County Durham and Tyne & Wear too.

So, why does it matter? Well, to be honest, it probably doesn’t. Remember what I said about flags? Brace yourself. I might be getting a little unhinged right now. Am I about to spiral into a pedantic bout of zealous regionalism?

The word ‘Northumbria’ is derived from ‘North of the Humber’. It began as an Anglo-Saxon kingdom, spanning from the River Humber in current-day Yorkshire, right up to the Firth of Forth in southern Scotland. At its peak, it comprised almost a third of the land area of mainland Britain.

When the Vikings popped by to ‘say hello’ to Britain in the eighth century, they infamously carried out their first raid on Lindisfarne in northern Northumbria in 793.

But whilst the Vikings conquered the south of Northumbria, establishing a capital at Jorvik (the modern-day city of York), they ran into problems when they tried to colonise lands to the north of the River Tees. In his fantastic book The Northumbrians: A New History, Dan Jackson points out that the Vikings continued to raid, but never settled, north of the river. This crucial moment in our region’s history is when the Tees began to form the southern border of modern Northumbria.

The Vikings weren’t the only ones who never made it north of the Tees. William the Conqueror’s Domesday Book of 1086 – that audited all land and property in his new kingdom – didn’t either, because at the time, this part of Northumbria wasn’t part of it. It took a while for the Normans to gain control of the region, which had remained virtually independent from the rest of England, even during the era of Alfred the Great.

Jackson also tells us that it was in the 11th Century that writers, such as Simeon of Durham, began describing the somewhat unruly lands north of the Tees as a distinct region in its own right.

So, the unique regional heritage that is so often attributed to Northumbria today, and indeed provides the fascinating story behind our region’s name, isn’t something that happened by accident. It is deeply rooted in our history.

That’s why, I have to admit, I lament the present-day conflation of ‘Northumberland’ and ‘Northumbria’ and the lack of the correct use of the word ‘Northumbria’ in the North-East’s everyday lexicon, except for a peripheral presence in some of our region’s modern institutions such as Northumbria Water, and Northumbria University.

Our region is constantly being reminded how much it struggles across a wide range of quality-of-life measures, including healthy life expectancy and employment.

However, to say our region ‘has a lot to be proud of’ would be something of an understatement. From Bede’s first history of the English to the precious manuscripts of the Lindisfarne Gospels; from the ancient Durham Cathedral to the glittering Sage Gateshead; from the mapping of the Milky Way to the creation of the largest dark skies park in Europe; from the invention of the lightbulb to the evolution of glass, Northumbria has always been a hotbed for learning, ingenuity and innovation.

Now, after reaching the giddy heights of Viking raids and unconquered borderlands I realise you may find me referencing an article I found in the Local Government Chronicle a few months ago something of an anti-climax. But bear with me.

This exclusive story revealed that a tentative agreement had been reached between all seven local authorities that currently straddle the separate North East and North of Tyne combined authorities, and all which lie within present-day Northumbria.

The deal would lead to the creation of a united ‘North East England’ Combined Authority. Jamie Driscoll, the current mayor of North of Tyne, which originally split away from the North East Combined Authority in 2015, has reportedly offered to step down early, to allow new elections for a directly elected mayor for this new region. The new mayor would be assigned devolved powers over limited aspects of pan-regional policy (but which crucially, in my view, would include transport).

With further reports revealing that talks are once again underway and moving closer to a deal with central government, I wonder whether we could take a moment to ask ourselves, assuming it goes ahead, what our new ‘combined authority’ should be called?

When the North of Tyne Combined Authority was created, the name was met with some ridicule. ‘North of Tyne’ is a place name that paradoxically, doesn’t actually describe a place. Rather, it describes a place in relation to another place. And even then, it doesn’t get that right. At the time, it was pointed out that there were parts of this new region, such as Prudhoe and Hexham, that were actually south of the River Tyne.

In my view, ‘North East England’ isn’t much better, as it just describes a smaller part of a bigger place. More recently, the seven local authorities have started referring to themselves as the ‘LA7’, a name that would work brilliantly, that is if we wanted our region to be called something that sounded like ‘newspeak’ from George Orwell’s 1984. Surely our region deserves something better; something that recognises its unique heritage and identity? Barmy idea alert, but how about we call the region by its actual, and original name: ‘Northumbria’?

One could argue, that just like ‘North of Tyne’, Northumbria just describes a place in relation to another. But there’s a crucial difference. The name ‘Northumbria’ is steeped in more than one thousand years of history, whereas I strongly suspect the name ‘North of Tyne’ was magicked out of thin air during a thought-shower session in an anonymous local authority boardroom.

By returning our region to its historic name of ‘Northumbria’, not only are we reconnecting with our long, distinct history. We are also creating an important brand.

Using its industrious heritage as its foundations, ‘The Region of Northumbria’ could build upon its present growth sectors, from green technologies to digital innovation; advanced manufacturing to health & life sciences, to make an exciting offer to those looking to invest in our region.

In the longer-term, I’d hope that people living across the whole of North East England will be proud to call themselves Northumbrians; the demonym contributing towards a more collective sense of self as well as a common sense of ownership of our region’s future.

But, for the time being at least, I plan to send Mayor Jamie Driscoll a new flag.