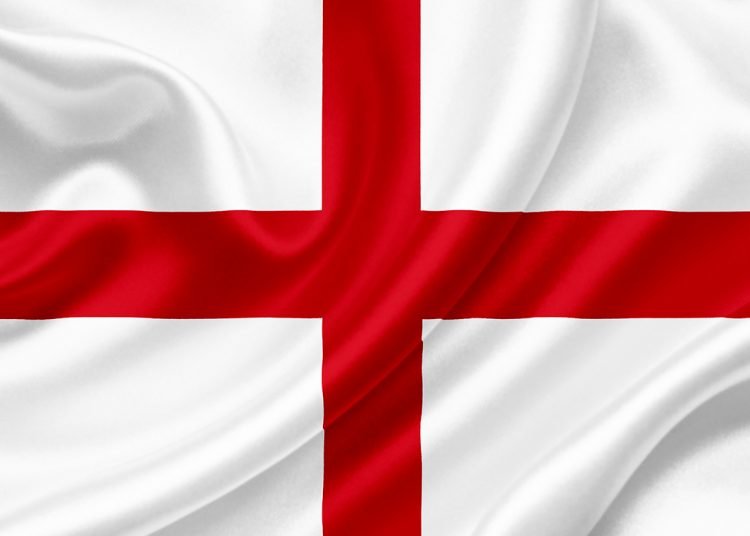 In preparing for this article I promised myself that I would not mention Orwell. His brilliant and undervalued essay ‘The Sporting Spirit’ is the only analysis of the horrible collective psychology inculcated by international sporting events one need read. (But please do read on anyway.) And his ‘Notes on Nationalism’ are a handy and imperishable guide to this analysis, if a slightly diluted one. In fact, I am always struggling not to smuggle a surreptitious reference to Orwell into my writing; but for this article I decided firmly to go it alone.

Until, that is, I found myself sitting in a bar on Sunday evening across from a group of adolescent boys, each one draped in a flag of St. George, and collectively preparing to watch a football game as if they were preparing for battle.

I had brought with me to pass the time Christopher Hitchens’s lovely introduction to the man ‘Why Orwell Matters’, and as I sat there with my ‘white wine’ (the menu offered a straight choice between red and white, as if this were the only distinction that mattered) in its plastic holding container (it can’t surely be called a ‘plastic glass’?) I came across this passage:

“With the United Kingdom devolving. . . the assertion of Scottish and Welsh and Irish nationhood was met in the southern nation with an efflorescence of the flag of St George. Sometimes an emblem on pubs or taxis, or on the brawny limbs of soccer fans, its reappearance was often a symptom of insecurity, both about the internal state of the kingdom and the external challenge represented by the idea of ‘Europe’.” [Emphasis mine].

I thought to myself, ‘well, I am going to have to mention him now, aren’t I?’

The power of the flag and the team

How many times have we been told in the last few weeks of the power of such a flag? Of its mystical ability to unite a country split by, well, the devolution of the United Kingdom and the idea of Europe. And how often has it been said that uniting behind this team is the perfect opportunity for the country to come together, to extinguish those rampant flames of division and disagreement, and other such romantic nonsense?

Not only are these invocations idiotic, but they also point to a decadent society and culture, and to a collective psychology made so weak and etiolated from the atrophy that years of unthinking will cause. One is reminded of Orwell’s terrifying depiction of a people united behind the benevolent ‘Big Brother’, frantically directing hate at their opponents on the telescreens.

War without the bullets uniting people?

To begin with, the whole effect of uniting behind a group of men representing one’s country in a physical activity is to create an atmosphere of war. For that is what it is: legions of men chanting songs behind their heroes, firmly believing that their ability to kick a ball, to run faster and jump higher, is somehow representative of their country’s national character. That whoever wins really ‘wins’ something and whoever loses will ‘lose face’. It is war without the bullets.

This was made clear when that atrocious song about invoking a metaphysical being to protect an hereditary monarch was sung (shouted?) by the group of young men, and the whole bar behind them. And if it were still not quite clear, it was emphasised and underlined when the same bar united in booing the national anthem of the opposing team. (Something which I am led to believe is common practice.) This is not healthy. And it does not lead to peaceful outcomes. But one thing did become clear to me: it certainly unites people.

Let’s analyse the situation the last time England won an international football tournament. The ‘second Elizabethan era’ was barely in its adolescence; the Universities of Oxford and Cambridge were as renowned for their high and objective standards as was the BBC; the pound sterling was worth the better part of three dollars; and, the Church of England represented a beacon of religious and spiritual guidance as opposed to a cringing branch of identity politics.

Since the day they thought it was all over, the country has made a staggering attempt to finish itself off. Of the nation’s institutions, only one still enjoys anything like the status it possessed when the football returned ‘home’. This is of course the Royal Family; though its decline into the realm of the gutter press and celebrity and reality TV, and its increasing cult, has similarly degraded its legacy.

And this sad fact fused with similarly pathetic attempts to attribute the creation of football to the character of Englishness manifests itself in the pitiful incantations I witnessed on Sunday evening, as I am sure did many other rational creatures with incredulity round the country.

This mentality, on the one hand clinging to an imperial former version of the country, and on the other desperately trying to impose a new image of self-righteous modernity on our new post-imperial form, is also apparent in the pathetic ‘news’ pieces by the BBC which, in the melancholy and cringing tones of a repressed sufferer, tell us that winning the tournament would be exactly what we need; after all our years of suffering; we deserve it. What we need is to grow up.

If this cringing prostration before a group of sportsmen were not enough before and during the tournament, their subsequent loss in the final has found people inventing new ways to contort their bodies and minds into novel forms of obsequious submission. In his work Dominion, the historian Tom Holland proposes that in the West our modern sensibilities, our conceptions of right and wrong, good and evil, of sin and sainthood, even our enlightened secularism, owe their origins and endurance to the legacy of Christianity.

My general indifference to this idea was greatly reduced upon seeing the shrines of secular saints, those football players, created across the country, and drawing pilgrimage from the most devoted followers so that they may kneel before them. And the practical beatification of Mr Southgate for managing a football team, and the nonsense suggestion that he, meek and mild, is the leader we deserve, is, I must agree with Mr Holland’s thesis, a recrudescence of the basest and serf-like elements of Christian mentality. And, as always, look to the language; who are the we to which the herd repeatedly refer?

The haunting spectre of Thanatos over the last eighteen months has undoubtedly increased the emotional reservoir in each society at the expense of our weakened barriers of rationality and reason. And the periodic bursting of the dam has been clear to see. But if you wanted to add to this vast fund of ill-will and emotional fervour in the world at the moment, and continue the degradation of the critical faculties, you could hardly do it better than a series of matches between Israel and Palestine, India and Pakistan, (England and Scotland), Ireland and Northern Ireland etc., each watched by a mixed audience. Remember this when anyone tries to argue that sport is the great healer, the bringer-of-people-together.

Let’s hope that by the next international event we have outgrown this period of primitive obsession with idols and saints and heroes who represent our ‘nation’ and our very way of life. But if we have not, then let’s hope that the team sent to represent us is second-rate, and cannot be claimed to represent England at all. As Orwell said, ‘there’s quite enough real causes of trouble already, we need not add to them by encouraging young men to kick each other on the shins amid the roars of infuriated spectators.’ And politics is boring enough without involving sport.