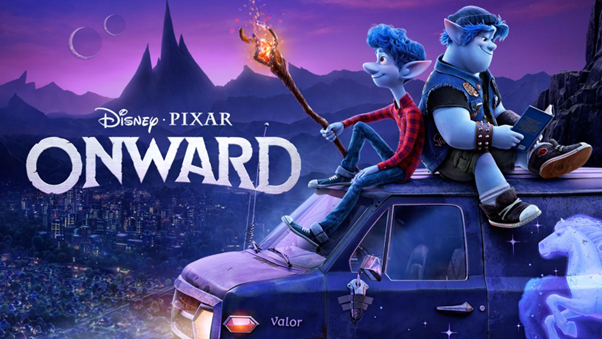 Disney Pixar’s Onward hit the streaming platform Disney+ in early 2020. The film is centred around brothers Ian and Barley as they attempt to cast a spell to bring back their late father for 24 hours. The spell fails, and they have to set off to find the components they need to try the spell again. The film takes a lot of inspiration from fantasy tabletop RPG games, with Barley having a particular interest in them. The lore from the games acts as their guide on their journey, as they happen to already live in a fantasy world.

The film explores how modern society killed the concept of magic and history in favour of technology, with their world’s history largely being forgotten. This symbology is comparable to the creativity and sense of adventure that is typically lost as people grow up. This could also be a reference to the way technology is taking over society, including in the ways children now seek new technology over toys and playing creatively. Disney is known for teaching kids the importance of retaining creativity and curiosity through its stories of adults who live to work and kids who want to remain young and carefree, and Onward is no different.

The mother plays a vital role in Onward

Unlike many other similar films, the protagonists’ mother plays a vital role, breaking the trope of the interfering parents being left in the dark whilst the young protagonists go on an adventure. Their mother Laurel teams up with another powerful woman and follows the boys on their journey, eventually becoming the protagonists’ biggest ally in their final fight. The widowed middle-aged mother playing as much of a vital role as the young male leads in a children’s movie is rare, and a great example for children to see. I was surprised by her characterisation, with her bravery and strength after her husband’s passing, rather than being the overly emotional naive mother that is much more typically seen in this trope. Laurel sets an example as a strong, determined woman who raised her two kids alone after becoming widowed.

Appreciate what you have

Despite their efforts, everything does not go to plan. Ian doesn’t get exactly what he wants, choosing his brother’s happiness over his own wants. The journey teaches him that he may  not have had a father around growing up, but he had his older brother who always looked out for him. Ian was so focused on what he didn’t have, that he never acknowledged and appreciated what he did have in Barley. His brother never got closure with their father, so Ian gives him the opportunity that he had wanted for himself. Ian realises that whilst he had Barley looking out for him as an older male role model throughout his life, Barley never had that. Barley had missed the opportunity to say goodbye to their father, so Ian gifts him this as a display of his appreciation for him. The movie teaches a great lesson about appreciating what you do have, rather than focusing on what you don’t have.